It took three months and a number of volunteers but a new mural featured in Mayfield's Webb Park has transformed the parkland area.

The Mural is part of the 'Wake Up Webb Park' project, an initiative of the Mayfield Business Association (MBA), to beautify areas in need of attention.

UON Natural History Illustration student Bronwyn Greive lead the project and transformed the 55 metre wall from a previously targeted graffiti hot spot, into a stunning scene of flora and fauna that represents the former wetlands of the Mayfield area.

"In researching the area I was able to establish that this was originally wetlands and part of the land of the Worimi Nation. So I researched, found and drew various species which would live in a coastal wetlands area and chose some of them for the design. I wanted people to be able to understand why this design was chosen and by incorporating the scientific and common names of the fauna, it provided another depth to their education," explained Bronwyn. 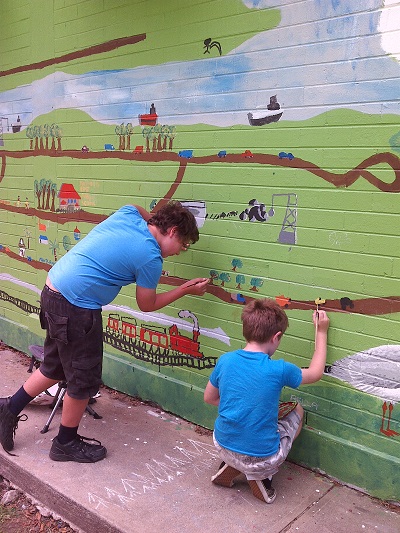 Mayfield Business Association coordinator, Rita Dixon, was extremely pleased with the final result and hopes the new addition to the streetscape of Mayfield will continue to be enjoyed and appreciated by the local community for years to come.

"The MBA is utterly delighted both with Bronwyn's artwork and the outcomes of this very inclusive community project. It has brought vibrancy and life back to a tired looking area," she added.

The University's Natural History Illustration Club also assisted with the painting and showed the volunteers painting skills so they could participate and consider their potential.

Bronwyn said that children have been spotted running from across the park to get to the wall quicker and often pat the animals.

This is the second time the University of Newcastle has been involved in an initiative with the MBA after Visual Communication Design students created the first mural in 2013.

An official launch was held in Webb Park earlier this month to recognise Bronwyn's contribution to the community and was attended by members from local businesses, residents and organisations who assisted with the project.