UON ranked in the world's top 100 for Civil Engineering

­The University of Newcastle (UON) Australia's discipline of civil engineering, recently ranked in the top 100 in the QS World University Rankings by Subject 2016, is proud to host the world-leading Centre of Excellence in Geotechnical Science and Engineering.

The Centre is pioneering new scientific approaches for geotechnical engineering design to underpin the development of energy and transport infrastructure, resulting in increased productivity and sustainability for the Australian economy.

The Centre is headed by Laureate Professor Scott Sloan (pictured), a leader in geotechnical computational modelling. He has pioneered new methods for calculating the load capacity and movements of geostructures such as tunnels, dams, highways and foundations. These methods have been used by engineers around the world to design cheaper and safer civil infrastructure. 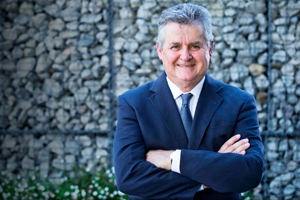 “We spend billions of dollars on developing energy and transport infrastructure, and face very significant issues in developing road and rail infrastructure on very soft soils. Understanding the behaviour of soft problematic soils is central to developing cost effective designs that function well over a long time frame. Future proofing our infrastructure is a very good way of describing what we do,” says Sloan.

“Australia will spend in the vicinity of 250 billion dollars in the next five years on energy and transport infrastructure – even if you can improve efficiency by 10%, that’s a huge benefit to society. And we think we can do much better than that,” he said.

Sloan’s achievements in the field were recognised in 2015 when he was named the New South Wales Scientist of the Year, elected as a Fellow of The Royal Society, and elected as one of only three International Fellows to the Royal Academy of Engineering in the United Kingdom.

Ever humble, Sloan says that while these accolades recognise his own career and research, they also acknowledge the outstanding geotechnical team at Newcastle, who lead the world in their field.

The University has an unrivalled track record in research across all areas of civil engineering research – including Water Resources and Infrastructure Performance and Reliability - and is the only university to achieve five star ratings in civil engineering over all three Excellence in Research for Australia evaluations.

Civil engineering research also underpins its great teaching, resulting in an enviable graduate employment rate of 92% for the Bachelor of Civil Engineering (Honours) degree (as reported by Graduate Careers Australia).