Simple dietary changes and existing drugs used for other disorders could help ease the symptoms for millions of people currently living with schizophrenia.

Psychosis, withdrawal, memory problems and a loss of motivation are just some of the symptoms of the complex mental health disorder that approximately 1% of Australians are likely to develop throughout their lifetime.

New research led by Professor Murray Cairns from the University of Newcastle and the Hunter Medical Research Institute (HMRI*) has revealed that a subgroup of people with schizophrenia may benefit from vitamin A treatment, found in foods such as salmon, cheddar cheese and liver.

“We investigated common genetic variation associated with schizophrenia and observed changes in 22 genes involved with the metabolism and function of vitamin A, which is part of the retinoid system,” Professor Cairns said.

“Vitamin A is responsible for good health and is essential for neural development, connectivity and plasticity. Our findings suggest that up to a third of people with schizophrenia have an above-average risk for retinoid system dysfunction.

“By identifying people at excess risk with a simple and cheap saliva test, we could immediately begin to improve their symptoms by treating them in a more targeted way through dietary interventions and clinically available pharmaceuticals that modify the system.”

While previous evidence supports the link between retinoids and schizophrenia, these findings are the first to identify a genetic burden in the retinoid signalling pathway that changes their function in people with the disorder. 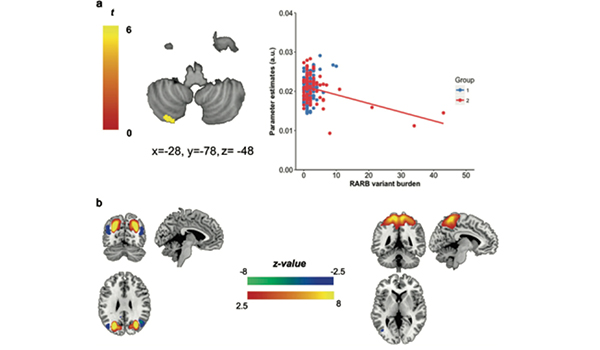 Regions of the brain altered in people with retinoid receptor variation - top focuses on cerebellum and bottom images are other parts of the cerebal cortex affected.

Testing for risk in these genes provides an opportunity for targeted interventions, with the vitamin or through synthetic retinoids such as Bexarotene, that can activate the retinoid receptors and potentially override the genetic variations contributing to the development of schizophrenia.

“While it’s still not entirely clear what causes schizophrenia, 80% of the risk appears to be inherited with the remaining 20% caused by environmental factors, such as infection in utero, and psychosocial factors including neglect and traumatic experiences,” Professor Cairns explained.

“The condition and its genetic determinants also varies from one person to another, but there are three main groups of symptoms – positive, negative and cognitive. A substantial proportion of the people diagnosed with schizophrenia have a severe cognitive deficit that impacts their memory and ability to work and relate to people.

“With no cure available and most people living with the disorder throughout their life, these findings reveal promising potential for the use of precision medication to help better manage the symptoms of schizophrenia.”

The study used data from 500 participants involved with the Australian Schizophrenia Research Bank, with clinical trials a necessary next step to measure and compare the effect of vitamin A dietary and related pharmaceutical interventions.

The research was carried out in collaboration with the University of New South Wales, Neuroscience Research Australia and Monash University, with the full findings recently published in the journal, Molecular Psychiatry.