What was happening to the climate 55 million years ago?

Climate emergency: Lessons from the Past?

The big question is: are we in a Climate Emergency?

From Earth’s perspective, “emergency” is a human perception. Earth is not in an emergency drive, because 55.5 million years ago our planet experienced a dramatic natural change that reproduces the current rapid change.

Humans have been on earth for 2.7 million years, a period that was dominated by long glacial conditions and short interglacials. Carbon dioxide concentrations fluctuated from 180 ppm in glacials to 280 ppm in interglacials. But now, carbon dioxide concentration is above 400 ppm, which is unprecedented in the whole time-span of human evolution. It is our own perception of emergency.

So what can we learn from the prehistoric climate data?

55.5 million years ago, in a matter of decades, which is the rate of change we are seeing now, a burst of light carbon was naturally released. A reservoir of buried organic carbon, which is the same type of carbon generated by burning fossil fuels, was released. This is an analog to the burning of fossil fuels that happened in the last 150 years. But 55.5 million years ago, it created a temperature rise of up to 8 degrees, which provides insight about what will happen if we continue with a “business as usual” attitude. So, the lesson from 55.5 million years ago tells us that Earth experienced an exceptional climate event, and recovered, though this did take 120,000 years.

The Palaeoclimate group at UON is unraveling Earth’s climate history from geologic archives, such as stalagmites. Data generated from this research tells us that Antarctica may melt rapidly, as it did before, and cause a sea-level rise of at least 5-7 meters. Currently, the group is conducting research in caves located in the South Pacific Ocean, with the ambition to understand what caused Antarctica’s melting and its implications for our future. 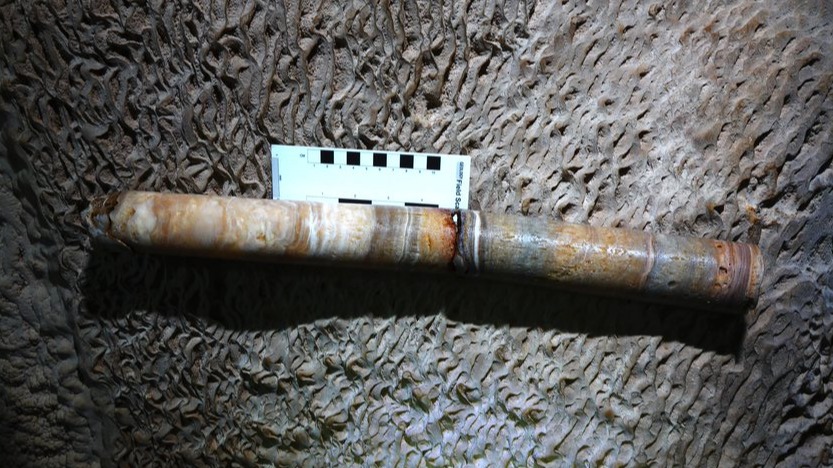 Photo caption: Example of core sample taken by Professor Frisia from a cave in Aitu, Cook Islands, which captures the geologic record for the past 200,000 years.

Professor Frisia’s research is integral to Climate modelers at UON who are trying to predict outcomes for the future and shows how teamwork can provide answers to urgent climate questions posed by the community.

Listen to the whole interview here.