Dr Hannah Power from the School of Environmental and Life Sciences, along with her research collaborators A/Prof Tom Hubble and Dr Samantha Clarke from the University of Sydney, have recently been awarded the exciting opportunity to join a transit voyage on the CSIRO research vessel (RV) Investigator.

In July 2020, Dr Power and colleagues will depart from Cairns and spend 11 days at sea transiting down the east coast of Australia ending in Hobart.

The goal of this research is to investigate eastern Australia’s submarine landslides and the potential they have to generate tsunami.

Submarine landslides have been occurring intermittently on the eastern Australian coastal margin for about 15 million years and can be expected to reoccur in the future. Some of these slides probably generated tsunami similar in size to, or possibly larger than, the 1998 Aitape Papua New Guinea submarine landslide event (~2000 deaths).

The voyage will identify landslide sites, assess the morphology of historic landslide scars and the characteristics of the slope they moved over to help determine their size and frequency of occurrence.

This information will be used to improve our understanding of the hazard and risk to the eastern Australian seaboard communities posed by locally-generated, submarine-landslide induced tsunami,” said Dr Power.

“It is critical to collect this information as it will ensure our emergency managers are better informed about the hazards facing Australian coastal communities.”

There is an opportunity for undergraduate students to participate in the voyage but places are limited so interested students should contact Dr Hannah Power directly.

This research has been supported by a grant of sea time on RV Investigator from the CSIRO Marine National Facility. 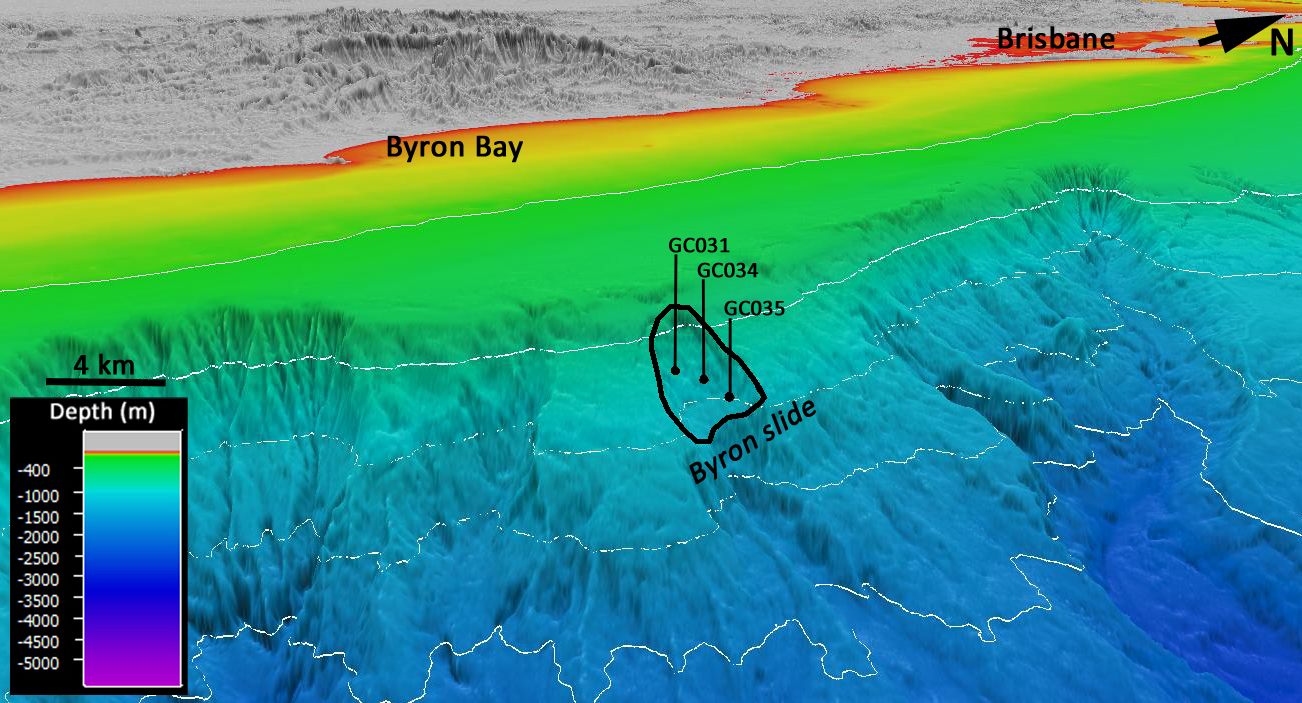 Image caption: Outline of the Byron submarine landslide scar offshore of Byron Bay, NSW, showing the location of three sediment cores that have been taken from within the scar with the coastal regions shown in grey in the background of the image.