Historians Dr James Bennett and Dr Nancy Cushing from the University of Newcastle (UON), along with Dr Erik Eklund from Federation University, VIC, bring together a selection of essays about Newcastle's radical past, and consider its impact on the present and future.

Newcastle's most notorious riot lives on in the lyrics of Cold Chisel's 1980 song Star Hotel, grainy YouTube videos and Novocastrian mythology. But beneath the still compelling images of surging crowds, hurled beer cans and flaming police cars was a radical intent that has been all but forgotten.

To understand the whole story of the Star Hotel riot, it should be seen in the context of other moments of resistance such as the 1890 Maritime Strike, Rothbury riot during the miners' lockout in 1929 and the recent battle for the Laman Street fig trees.

As Australia's first industrial city, Newcastle is a natural home of radicalism but until now, the stories which reveal its breadth and impact have remained untold.

In 2010, Dr James Bennett founded the Radical Newcastle project – which aims to recover the radical and often submerged dimensions of Newcastle's past and present.

By bringing together community activists, freelance writers, local historians and academics from the fields of human geography, creative arts, media, communications, anthropology, history and politics – the Radical Newcastle Colloquium in 2011 and Radical Newcastle Symposium in 2012 fostered awareness of the contributions each could make to understanding Newcastle's radical past and its impact on the present and future. 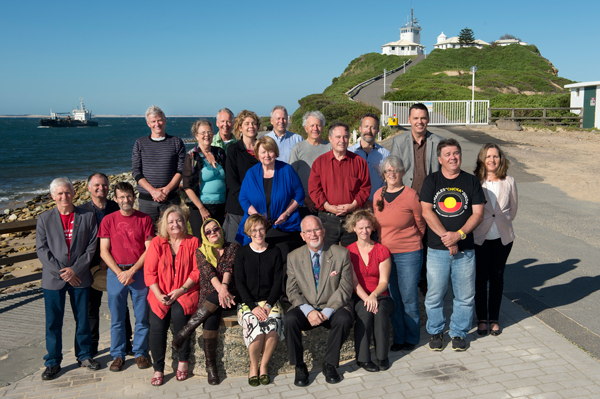 As a result of the project, the Radical Newcastle book will be published by NewSouth Publishing in 2015. This collection of essays by leading scholars, local historians and present day radicals documents both the iconic events of the region's radical past, and less well-known actions seeking social justice for workers, women, Aboriginal people and the environment.

All approach their topics from a point of deep engagement, whether as scholars, participants, relatives of activists or all three. The topics engage with the key issues: unionism, conscription during World War I, the status of women and Indigenous people, environmental activism and the role of religion in public life. In doing so, they add a new dimension to existing national interpretations of these topics and in some cases challenge them.

"From an historian's perspective, there is so little written on the history of Newcastle," said Dr Bennett. "The whole radical side of Newcastle's past really needs to be excavated, needs to be unearthed – and that's actually in the subtitle of the book: Unearthing the radical past and present of Newcastle and the Hunter Region."

"So in one sense, I think it is a supressed narrative that needs to come to the surface. From another perspective, perhaps a more general one, it's about locating Newcastle in the context of a post-industrial city.

"Geelong, for example, with the demise of the automotive industry, quite often what comes up in discussion is Newcastle. How did Newcastle deal with this deindustrialisation, what did they do? I think Newcastle is still in a period of transition post BHP. It's still reinventing itself, still looking at new pathways."

"Think of everything that has been happening in terms of local government – proposed changes to the train line and so on; there are big changes regarding the future of Newcastle. So now is a really good moment to think about the past and how it impacts on our present and future choices."

Dr Bennett also aims to look at Newcastle in the context of a post-industrial city at an international level.

"This is something I hope to explore further next year – making comparisons with Northern England, for instance," said Dr Bennett. "We have just touched the surface of international points of comparison in Radical Newcastle. Looking at other cities can help to resolve issues of how to go forward after the demise of an industrial base."

Radical Newcastle will be launched in early 2015 at the Newcastle Writers' Festival (20 to 22 March), coinciding with UON's 50th anniversary celebration events. References to the University and its staff in many of the chapters point to the role the institution has had in inspiring and supporting community activity over its first 50 years.

"I hope that local people will be interested in picking up the book and thumbing through pages, because they can gain a new perspective on some of the big local issues that have been in the news over the last few years, such as 2013 Gold Walkley award winner and UON alumnus Joanne McCarthy recounting her experience of exposing institutional child sexual abuse, the Laman Street fig fiasco and the current resistance to the remaking of the CBD," said Dr Bennett.