The University of Newcastle's Religion, Marxism and Secularism Network has been awarded the first international research grant from the City of Beijing, China.

Professor Roland Boer, Director of the Network and the Xin Ao Professor of Literary Theory at Renmin (People's) University of China, coordinated the application for the project: 'Chinese Marxism: On the Sinification of Marxism in Chinese Academia'.

The grant, RMB 120,000 (AUD $25,000), was given by the City of Beijing's Research Centre for Studies on Socialism with Chinese Characteristics, which is part of the Beijing Federation of Social Sciences. 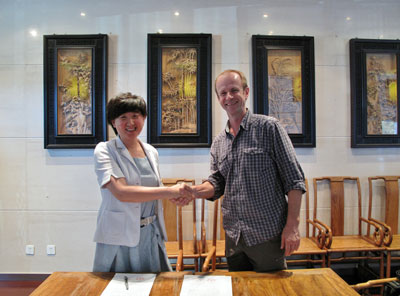 Professor Roland Boer signing contracts in Beijing with Professor Li Cuiling, director of the Centre for Studies on Socialism with Chinese Characteristics

"The experience was very illuminating. Grant funding in China is devolved onto local governments, with the city of Beijing offering funding for scholarly research," Professor Boer said.

"This was the first application by a foreigner, so they were in new territory. In contrast to Australian grants, they offered to assist with the development of the project and gave experienced advice as to how to proceed. They were very keen to see it as the first step of a much longer project."

The project will focus on two key areas, philosophy and literary criticism, and analyses how Marxist approaches have developed and changed in a Chinese context. In particular, the project will analyse such scholarship in order to identify its unique insights. It will also enable Chinese scholars to engage with and be directly involved in international debates concerning Marxist approaches, which they have not had sufficient opportunity to do before.

The project will include a conference in Beijing in April 2016, as well as publication of journal articles and an edited book, in both Chinese and English. Of particular note, Professor Boer will write articles for the flagship newspaper: The People's Daily.