On Monday 23 March the Baird Government announced, that if re-elected, they will invest up to $20 million to establish an Aboriginal Centre for Excellence in Western Sydney. 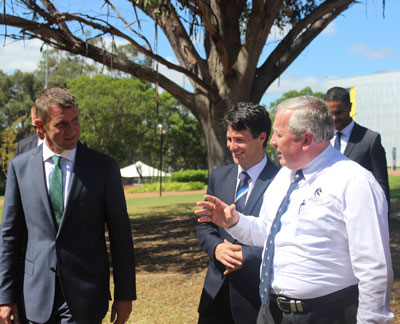 Professor Foley outlining his vision for an Aboriginal Centre for Excellence with the Premier and the Minister for Aboriginal Affairs.

The University of Newcastle (UON) Faculty of Education and Arts researcher Professor Dennis Foley was invited to this event and joined the Premier, the Minister for Aboriginal Affairs the Hon Victor Dominello, Member for Penrith Stuart Ayres and co-founder of the GO Foundation Michael O'Loughlin at the University of Western Sydney's Penrith campus to make this important commitment.

"This is an exciting initiative which focuses on empowering Aboriginal students through mentoring, education and employment," Professor Foley said.

Over the next decade Western Sydney will be an epicentre for employment with new suburbs being established, new schools opening and major infrastructure projects underway.  An Aboriginal Centre for Excellence will tap into these opportunities. Professor Foley's involvement was requested by the Minister for Aboriginal Affairs due to his close working relationship with Professor Foley as we strive to close the gap through economic development. Whilst there is much more to do Minister Dominello stated, 'I genuinely believe that, in partnership over the past 4 years, we have laid the foundations for ongoing success'.

With over 60 per cent of Aboriginal people living in Western Sydney under the age of 24, this proposed Aboriginal Centre for Excellence is about investing in social infrastructure which will help future generations of Aboriginal students to succeed through education and employment.

UON is positioned to work in partnership with the Government, Aboriginal communities and key stakeholders in Western Sydney to ensure the Centre for Excellence model matches the needs and aspirations of the community in providing independent consultation to establish a competitive tender process to select a qualified provider and appropriate site for the Aboriginal Centre for Excellence.