The University of Newcastle’s criminology program has contributed to the Waiting for Equality Exhibition currently on display at Watt Space Gallery until March 4.

Criminologist, Dr Justin Ellis, reflects on two media items in the exhibition which both feature stories about a particularly grim period in LGBTQ-police relations in NSW. One, headlined ‘Death Boast’ in the Sydney Star Observer from 1991, deals with a 17-year-old school boy who boasted about bashing a gay man and throwing him over a cliff. 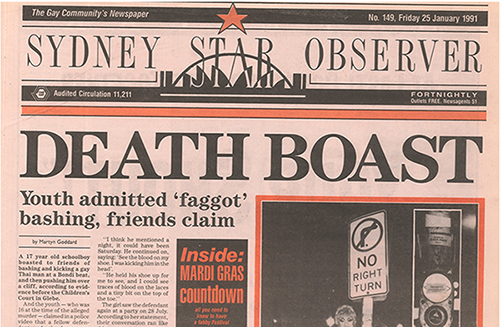 Another from the 2013 Sydney Morning Herald recounts the murders of 80 gay men, with 30 cases unsolved.

Notable to the Newcastle-specific focus of the exhibition is that the collation of some of those crimes and how they were dealt with by police developed out of research conducted at the University of Newcastle by criminologist Professor Stephen Tomsen, and Dr Allen George.

Dr Ellis said police inactivity in New South Wales was tacit encouragement to the perpetrators of ‘gay hate crimes’, and to the ongoing narrative of gay men as deviant.

“The police inertia in response to this series of murders was all the more beguiling given the brutality of the attacks. It also shows how state failure to address such issues can damage an institution’s reputation for decades, with LGBTQ+ communities typically having lower confidence in police than the general population, in part as a consequence of police failure to properly investigate these murders.”

“The failure of NSW criminal justice institutions to take murders of many gay men seriously and properly investigate them from the 1980s to the early 2000s compounded the stigmatisation of gay men perpetuated by the 22 years it took to decriminalise homosexuality across Australian jurisdictions.”

“This narrative was replayed during the same-sex marriage debate and used as the basis for a moral argument against allowing same-sex couples to marry, further perpetuating overt discrimination and once again tacitly endorsing everyday casual prejudice against sexual orientation and gender identity minorities,” he said.

The Waiting for Equality exhibition at Watt Space Gallery will be coming to a close on March 4.

Waiting for Equality has developed out of an interdisciplinary research project by Dr James Bennett, Professor Marguerite Johnson, Dr Kcasey McLoughlin and Dr David Betts at the University of Newcastle and in conversation with LGBTQI+ community groups in the region.