Deb Mansfield exhibition at The Lock-Up

On Friday 22 May, Deb Mansfield in collaboration with Belinda Howden will launch The Island Could Be Heard by Night at The Lock-Up, Newcastle.

The Island Could be Heard by Night, by Deb Mansifeld and Belinda Howden, focuses on island histories and sea-faring myths, and investigates the island narrative of Nobby's Head (Whibayganba), Newcastle NSW. 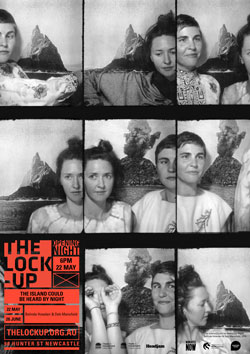 Once a stand-alone island at the mouth of the Hunter River, the form and conception of Nobby's Head has changed significantly since European colonisation. The visiting tall ships of the early colony viewed the island as an obstruction. The threat of shipwreck at the mouth of what could be a very productive port resulted in significant tunnelling into the base of the island, an intention to eradicate the site by explosives. In the expansive years of settlement the island was viewed as an asset. The rich seam of coal running through its body saw the island severely quarried, reduced and flattened by a third of its original height. And in 1818, in an effort to improve the islands productivity, the construction of a convict-built pier was ordered. After thirty-eight years of hard labour the pier was complete and has since connected island to mainland.

The transformations imposed upon Nobby's Head are radical. At the hand of human intervention the island has been violently rejected, slowly degraded and permanently folded into the form of the dominant landscape. These shifts in shape and function reflect the potency of island spaces, their ability to capture prevailing cultural imagination. The island can operate as an object of desire and otherness, death and salvation, homogeneity and uniqueness. They can be viewed as property, an outlier, a body or model for the self. Or in other words, an island is the ideal space for ideas.

Nobby's Head not only tells of a complex historical narrative, it is a compelling example of an island lost. Its dual identity – open and closed, once bound and now connected – caught the attention of Mansfield and Howden. With arts practices that share a common fascination for the cultural and figurative potential of island spaces, they explore the landscape as a mythologised site. Across the two exhibition spaces, gallery and publication, they unpack and contribute to the layers of fictionalised landscape that makes up Nobby's Head today.

View The Island Could be Heard by Night online publication