Graduation marks a proud moment for many families, but on Thursday the Cunneen family will celebrate not one, but two, of their family members graduating in the same ceremony.

Zoe Cunneen and her brother, Ryan, will graduate from a Bachelor of Commerce and Bachelor of Information Technology, respectively.

They say good things come in threes, which rings true for the Cunneens as their father, and University business lecturer, Dr David Cunneen, will also be involved in the ceremony as part of the academic procession.

Brought up on the Central Coast, both Zoe and Ryan completed their schooling locally, and then took time to gain real-world experience before enrolling in the Open Foundation program at the University of Newcastle.

Prior to studying, Ryan worked in the metals and engineering industry, but he said it was a desire to pursue something different that spurred him to enrol at university.

“I’ve always had an interest in building, and the in-depth process of making something from start to finish. I felt a degree in Information Technology was better suited to me, and also combined my interest in computers,” Ryan said.

Similarly, Zoe was originally enrolled in Bachelor of Medical Science, but through an elective discovered she was drawn towards business studies, leading her to change her degree to Bachelor of Commerce.

Zoe said the opportunity to be taught by her father, Dr Cunneen, was a highlight of her time at university.

“Dad has such a natural talent for teaching. His ability to deliver engaging lectures and make such a positive impact on his students and their studies is inspiring. I feel extremely privileged to have been one of his students,” Zoe said.

Her father was also a pillar of emotional support while Zoe juggled education and personal life.

“During my studies, my partner and I discovered we were to become first-time parents.  Although this was an extremely happy time for the both of us, I had to readjust my study commitments,” Zoe said.

Dr Cunneen has been a business lecturer at the University of Newcastle for more than 20 years. After a career at CSR Limited, and experience establishing IT-based start-ups, he said it was a desire to help others which drew him towards teaching.

“I love being in the classroom with my students, helping them to understand theory and how to apply it in the business environment, to benefit them, their families, communities and countries,” Dr Cunneen said.

“The University, and especially the Ourimbah campus, has played a critical, wonderful role in the development and future of my family.

“I hope our story will help showcase the powerful positive impact university can have on a family,” Dr Cunneen said.

Dr Cunneen said he was immensely proud that two of his three children will graduate this week, and that they’ve indicated a desire to follow in his footsteps and pursue masters study.

“Supported by their Mum, Suzanne, younger sister, Sasha, and in Zoe’s case also by her partner Mark, Zoe and Ryan have both worked extraordinarily hard over many years and will now see their hard efforts rewarded with University of Newcastle degrees, as well as expanding job opportunities,” Dr Cunneen said. 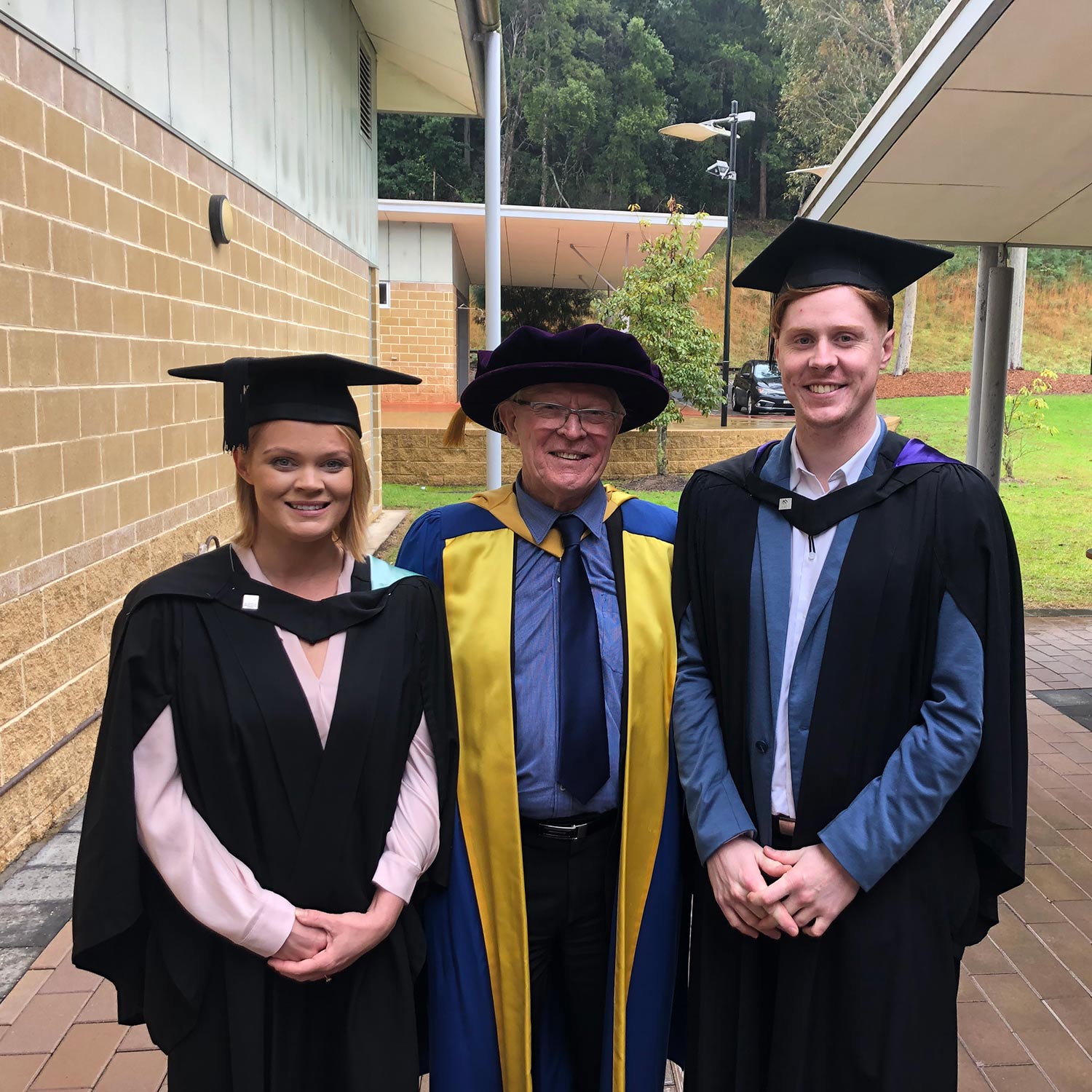 They say good things come in threes, which rings true for the Cunneens as their father, and University business lecturer, Dr David Cunneen, will also be involved in the ceremony as part of the academic procession.

The University, and especially the Ourimbah campus, has played a critical, wonderful role in the development and future of my family.