University of Newcastle PhD (Building) candidate Noah Mwelu has been fighting for his education his whole life.

Born into a polygamous family in a small village in the Mbale District of Uganda, Noah was raised by his maternal grandmother, who he calls ‘mum’. Childhood was tough, and nothing came easy. But despite incredible hardship, Noah says education was always front of mind.

“’Education is a key to bright future.’ These were my grandmother’s words to me,” says Noah.

“I now see the reality of her words very fresh in my mind wherever I go,” he says.

Her belief in the power of education saw Noah’s grandmother sacrifice her own meagre earnings to fund Noah’s school tuition fees up to Senior Two – the equivalent of early high school. But from there the money ran out, and Noah found himself at a loss for how to keep going.

“This was a turning point in my academic life,” says Noah.

The next few years were a gruelling slog. Noah picked up what odd-jobs he could, working long hours to try to make ends meet and often sleeping rough in chicken sheds. Still, his passion for pursuing a University education burned strong.

In 1996 he sat his University entrance exams, but due to prevailing circumstances didn’t get the marks he so desperately needed. Deeply saddened, he resigned himself to seeking out working wherever he could to survive.

By 1999, Noah had married Dr Susan Watundu ­– who had just finished her Higher Diploma from Makerere University Business School (MUBS) in Uganda.

“Up until 2006, I did all sorts of casual jobs including working in coffee factories, selling soda, plastics, stationary, charcoal, bananas and cocoa,” says Noah.

Noah and Susan continued to work tirelessness to save money and provide for their growing family.

“With motivation from Susan and Uncle Geoffrey Wepondi, I resumed my academic journey by doing a Certificate in Strategic Procurement and Logistics Management from Makerere University, Uganda in 2006.

“In 2007, I sat for Special Qualifying Exams to Makerere University for a bachelor’s degree in Procurement and Supply Chain Management. I passed, and started my degree on private sponsorship in 2007,” says Noah.

Noah was on a roll, and a Master’s degree in Procurement and Supply Chain Management followed. In 2012, he joined the University as a Lecturer – a monumental achievement.

“It was a very special day in my life to gain formal ranks in government service. I joined Makerere University Business School (MUBS) at the rank of Assistant Lecturer and immediately after completing my Masters in 2013, I was promoted to full Lecturer position.

“I really enjoy my role as a Lecturer and academic. This is the best way of sharing knowledge and transforming the economy, life, and minds of others,” he says.

Noah wasn’t about to stop there. He began to research PhD scholarship options, and came across the University of Newcastle, Australia.

“I remember receiving the news that I had won the scholarship in December 2015, when I was travelling to my village with my family for Christmas holidays.

“I thought ‘Who am I to be sponsored in such a powerful and internationally-recognised University by the Australian government? It is miraculous. Maybe I am still dreaming? This is unbelievable’,” he says.

In 2016, enrolled in a PhD (Building) specialising in public procurement for construction projects, Noah set off across the world.

“I initiated collaboration discussion with my employer (MUBS) and Head of School Architecture and Built Environment. We are working on formally signing a Memorandum of Understanding (MOU).

“I hope it works out well. I am passionate about this collaboration because it is the only way of serving and appreciating both the governments of Australia and Uganda. We can share a lot, ranging from academics, research collaborations, to aspects of infrastructure,” he says.

For Noah, the future looks bright.

“In five years, I want to see myself as a Professor of Public Procurement, contributing to the transformation of the Ugandan economy through value-for-money procurement,” he says.

Despite his immense success against all odds, Noah remains incredibly humble.

“One thing I learnt from my late grandmother (Efulasi Nakhumitsa) is that you cannot pay back the contributions of those who made you what you are. But the best way is to show them that you really and truly appreciate it from the bottom of your heart,” he says.

Noah is set to complete his PhD, Compliance and Regulatory Framework in Public Procurement of Public Road Construction Projects in Uganda, in 2019.

Noah would like to extend his sincere and heartfelt thanks to the Commonwealth Government of Australia, the Australian community, Government of the Republic of Uganda as well as both the University of Newcastle and Makerere University Business School. He gives special thanks to his committed supervisors, Professor Peter Davis and Dr Yongjian Ke and Head of School SABE, Professor SueAnne Ware. He would also like to thank the doctorial confirmation committee; Professor Thayaparan Gajedran, Professor Willy Sher and Dr Marcus Jefferies, University of Newcastle Vice-Chancellor and President, Professor Alex Zelinsky, Pro-Vice Chancellor FEBE Professor Brett Ninness, MUBS Principal, Professor Waswa Balunywa and Professor Suzanne Ryan from the Faculty of Business and Law. Noah also gives thanks to his late grandmother Ms Efulasi Nakhumitsa, his wife Dr Susan Watundu, and their daughters Lucky Mercy, Peace Joy, Talituleka Hope, Blessed Malyamu and Mariza Susan, as well as Christopher Besweri Kaswasbuli, his mother Naome Namono, his mother in-law Malyamu Wambi, his Uncle Richard Mabonga, Geoffrey Wepondi and Auntie Joy Namasaba among others.

Study a PhD (Building) at UON 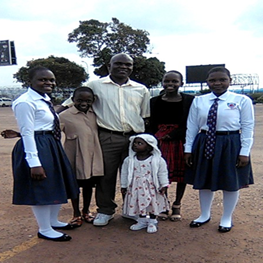 Noah moved from his home country of Uganda to study a PhD (Building) at the University of Newcastle.

In five years, I want to see myself as a Professor of Public Procurement, contributing to the transformation of the Ugandan economy through value-for-money procurement,