A mathematician in the School of Psychology, and Head of the Vision Sciences Group in the HMRI, Sally McFadden has dedicated over 30 years to Vision Science. 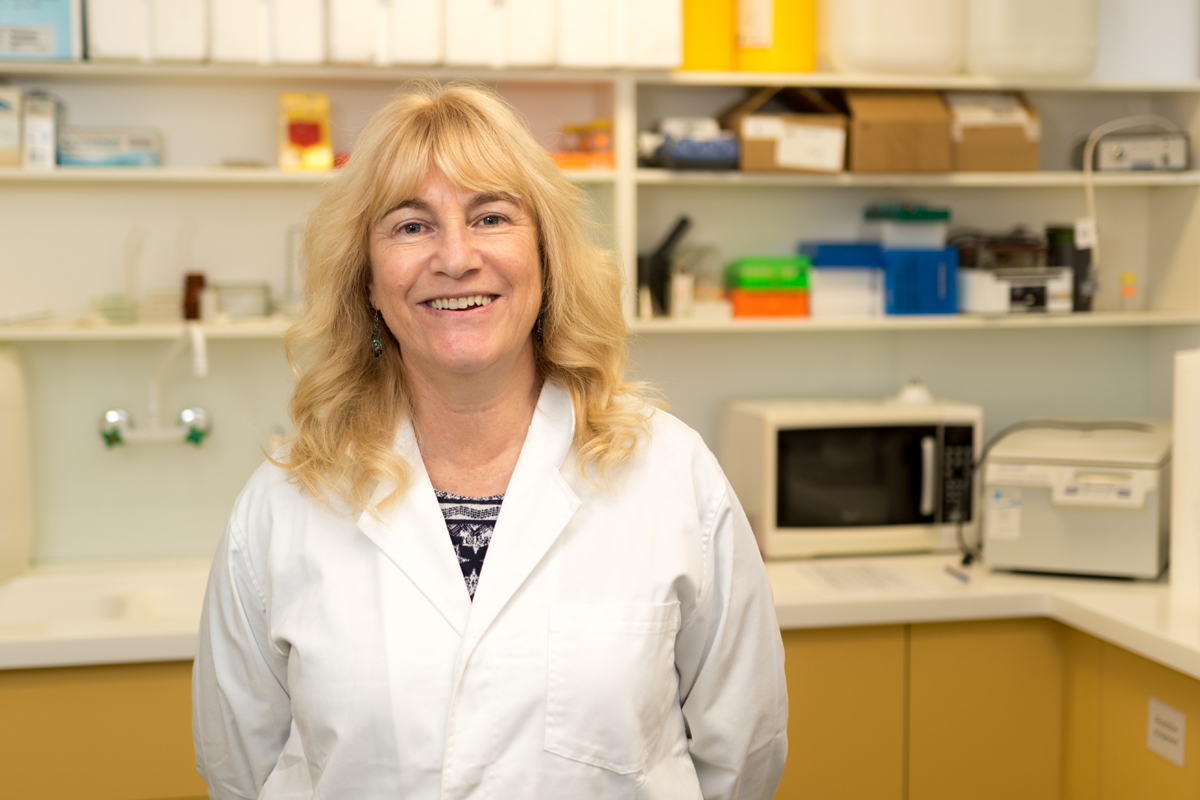 A neuroscientist and neuropsychologist by training, Sally’s quest to understand the eye began almost by accident. “I was working on visual pathways in the brain which allow us to see in 3D and our manipulations changed the eye itself - I thought I had better make sure I knew what was going on in the eye, otherwise I couldn’t work out what signals were going into the brain.”

“So I sank down into the retina, fell in love with the eye, and never emerged.”

“We are interested in the neurobiology underlying ocular disorders,” Sally says.

Sally has made large contribution to Vision Science, being involved in the groundbreaking discovery that myopia is visually mediated as opposed to genetic. She also developed a mammalian model of myopia that is now utilised globally to conduct research in this field.

Within the last generation, a global myopia epidemic has become apparent with 50 per cent of the world’s population expected to suffer from short sightedness by the year 2050.

“Myopia is where you are short sighted, because your eye is too big and it grows too rapidly during development,” Sally says.

Already the highest cause of blindness in Asia, it is predicted that by 2050, one thousand million people across the world will be affected by high myopia, the worst incarnation of this condition.

By studying the mechanisms underlying myopia, the Vision Sciences group is working to design treatments and interventions to slow myopia progression.

To stop the too-rapid enlargement of the eyeball that creates myopia, Sally’s team and collaborators have been developing pharmacological interventions as well as developing better spectacle and contact lens designs.

To combat this, Sally is working on early detection of staphyloma, and repair of tissue within the sclera.

“We know that in high myopia, the skin of the eyeball, called the sclera, remodels and changes, and the crosslinks that hold the layers together degrade, causing the layers to slide around,” Sally says.

“So one treatment we are trying to do is to put the crosslinks back in and strengthen the sclera, so it gets it bounce back.”

Although crosslink repair of the cornea has recently become common, Sally notes that her team and collaborators are forerunners in the quest to strengthen and repair crosslinks in the sclera at the back of the eye.

Through a new lens

Sally has also been investigating the efficacy of multifocal spectacle lenses designed to combat the shrinking in the periphery of the eye that accompanies myopia and that contain signals that slow eye growth.

“These lenses do have an effect on slowing things down a little bit but they don't fix it.”

Another area of expertise for Sally is optical imaging.

“We're quite interested in the changes that occur in the optics of the eye in the development of myopia as well.”

“We are trying to develop some new techniques for eye imaging because the current procedures have limitations in terms of imaging for myopic tissues,” Sally says.

The beginning of the end

“Tantalizing treatment options to limit further global increases in the prevalence of myopia are emerging, but we still have work to do” Sally says.

“We know it should be fixable, and solutions are emerging.”

“It is an incredible journey, which I have witnessed from the beginning, and I have the privilege of seeing at least the beginning of the end.”

Sally also works on eye movements and attention, and pursues more esoteric projects when she has time in her busy research schedule.

For example, she developed a way to map a person’s attention profile, which turns out to be like a personal IQ fingerprint. “I would also love to do a study which showed that if you spend time focused in the distance that there is a pathway that would actually relax you and change your mood state,” Sally says.

But for now, myopia is the focus.

The Vision Sciences group welcomes collaborations from those with interests or expertise in neuroanatomy, molecular biology, optometry, ophthalmology and surgery, physicists and biomedical engineers. The group also welcomes investors and companies interested in collaborations using a myopia model to develop and test treatments for myopia.