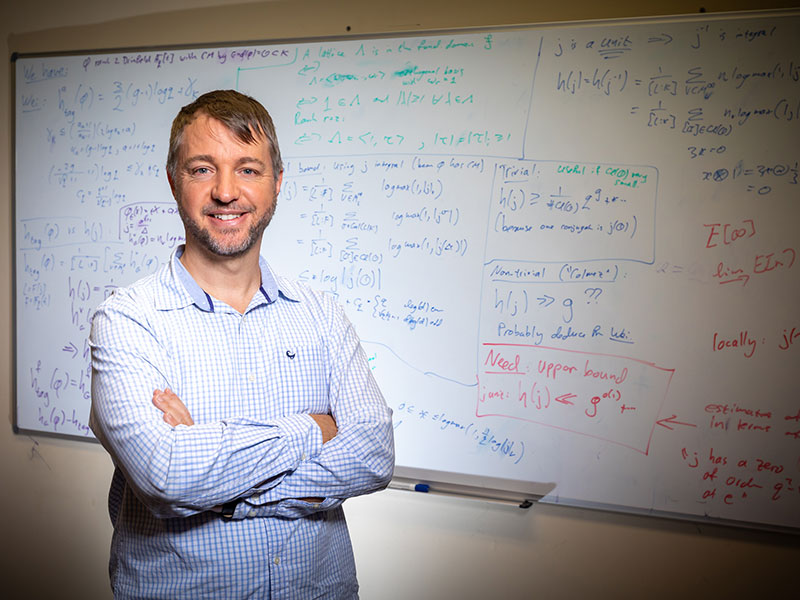 “A lot of mathematics that underlies our technological civilisation was discovered decades or centuries ago by mathematicians in the course of purely curiosity-driven research,” explains Florian.

“They couldn’t possibly have known that their discoveries would eventually find applications in the distant future. Likewise, I have no idea how much of my work may one day be applied. Instead, I am guided by my curiosity and by a sense for what’s beautiful, interesting and deep.”

Florian believes in honouring the research process and allowing it to lead him in novel directions, regardless of whether the real-world application is immediately obvious. Much of what he studies has the tantalising potential to drive yet-unknown future technological innovation—just like the discoveries of mathematicians before him.

“To most people, mathematics is invisible, running quietly in the background, but it underlies our modern society. For example, the electronics in your phone rely on quantum mechanics and other physical processes, which we can only understand with the help of advanced mathematics.”

Florian’s work in number theory, one of the oldest branches of mathematics, studies sets of whole numbers. Most people would recognise basic sets of numbers such as even, odd and prime numbers. Florian’s work carries this same idea into much more sophisticated and complex territory, exploring new and unexpected relationships between natural numbers. It’s a branch of mathematics sometimes referred to as “higher arithmetic”.

“Mostly my research goals are quite abstract and difficult to convey to a lay audience, but here is one theme. Number theory is divided into two ‘parallel worlds’.

“The first classical world deals with ordinary numbers and is called the world of number fields (a ‘field’ is a number system within which one can consistently add, subtract, multiply and divide).

“Parallel to this is the world of function fields. Here the ordinary numbers are replaced by other objects, which nevertheless behave just like numbers (they also form fields). You can imagine these objects to be like numbers, except that when one adds or multiplies two of them you can discard any ‘carries’ that occur in the digit-wise additions, e.g. 7+8 = 5 instead of 15.

“These two worlds are remarkably similar, and most phenomena in number fields have their analogues in function fields, far more so than one should reasonably expect. Why is this? What are the similarities and what are the differences? This has been a recurrent theme in my own research.”

Most research in number theory is not solely motivated by real-world applications. However, one important application is cryptography: the study of how messages can be safely encrypted and authenticated.

“A lot of widely-used cryptography relies on relatively simple number theory that was discovered centuries ago, but only applied to cryptography since  the 1970s.”

Cryptography helps protect users from having their messages read or their online activity impersonated. As technology advances rapidly around the world, number theory is increasingly being applied in new, more complex ways to facilitate greater technological security.

“The advent of quantum computers, which will be able to crack many widely used cryptographic systems, necessitates the development of post-quantum cryptography, which relies on much more abstract and sophisticated topics in number theory.

“I am very fortunate to be already familiar with these more advanced topics from my own work, and I am very excited to become more involved in post-quantum cryptography.”

Florian’s studies and research work have seen him travel widely, pursuing learning and collaboration opportunities with some of the brightest minds in his field.

He completed his D.E.A. (Masters) at the Université Pierre et Marie Curie, France, his PhD at the Université Denis Diderot, France, and two postdoctoral fellowships in Taiwan and Germany. He also taught at Stellenbosch University, South Africa, and undertook research semesters in Germany and Switzerland.

“There is a near infinite amount of mathematics to learn, and mathematics really builds up on other mathematics to an extent not seen in other disciplines. To understand one topic, you must first master three others”

Through challenges and successes, Florian’s love for pure mathematics continues to propel his research forward. His passion for collaboration has also led to first-of-their-kind activities such as the online 2020 Number Theory conference which, on behalf of the Priority Research Centre for Computer-Assisted Research Mathematics and its Applications (CARMA), brought together researchers from all areas of number theory worldwide.

“Facilitating collaborations between mathematicians is critically important for enabling as yet undreamed-of technologies. Fundamental research is essentially an investment in the future, providing a solid basis for new possibilities and applications.

“Mathematical research can be psychologically quite tough. Progress only occurs in occasional bursts—sometimes months apart—and most of the time I’m stuck on a problem. When I do have a good idea and make progress on something, it feels great!”