Looking beyond the surface of physics

A physicist with a research income in excess of $18.7 million, 50 Research students and almost 200 refereed publications, Professor John O’Connor doesn’t narrow his focus when it comes to research. 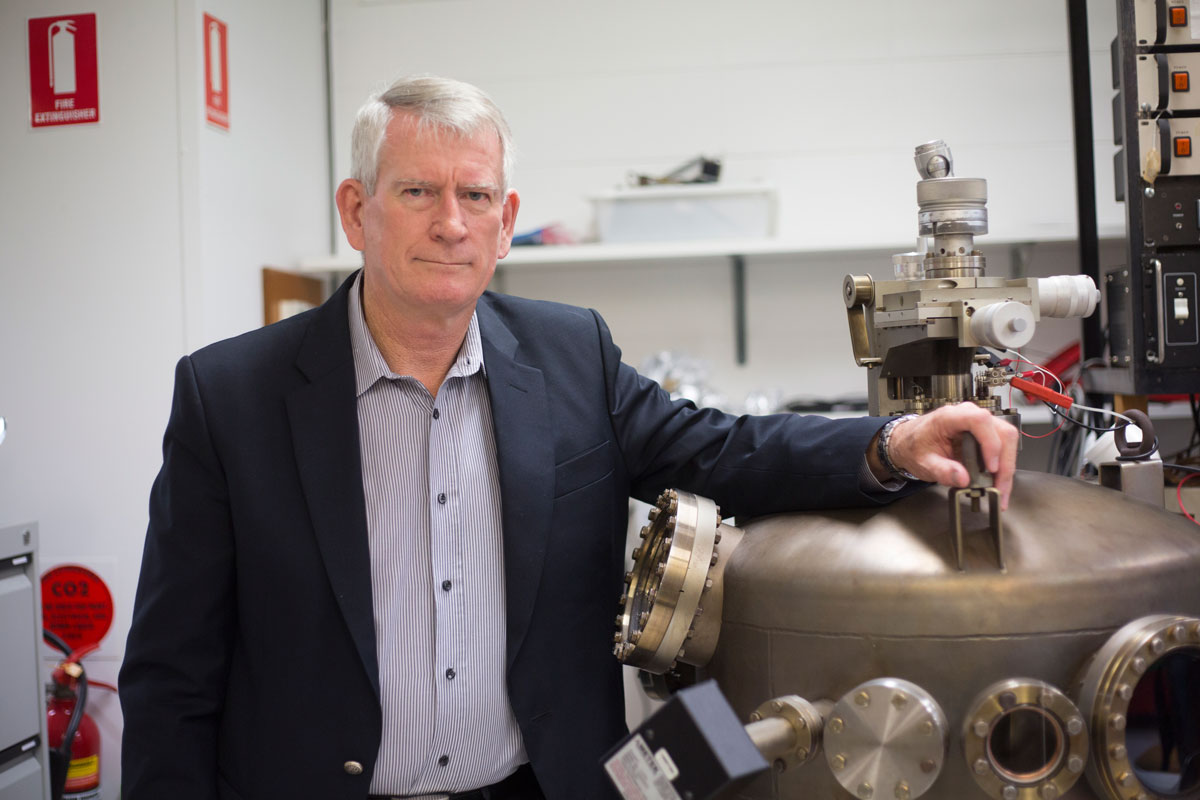 Since joining UON in 1981, John has collaborated across the University and the globe in a broad range of spheres; from surface and medical physics to science communications. Awarded a Doctor of Science from ANU in 1999, and the recipient of the Australian Institute of Physics Award for Outstanding Service to Physics John’s vast contributions to the field have not gone unrecognised or unrewarded.

While his main speciality is materials science and surface physics, this Professor of Physics has an unquenchable interest in collaborative research and sharing his knowledge with others. Over his 35+ years at UON, John has developed a range of tools and techniques to benefit other surface and medical physicists; identifying and measuring holes in existing data.

John’s work from the 1980s and 90s has led to the development of data which will guide the second generation of hadron therapy research. Hadron therapy is the medical use of high energy particles rather than Xrays  to treat cancer.  Although Australia has yet to invest in hadron therapy, there are currently over 50 facilities world-wide with another 25 under construction.  In the first generation of facilities  protons were used, but there is a growing movement to the use of  carbon as a second generation approach, which is where John’s work into the slowing down process of projectiles will come into its own by using energy loss and variability as predictors for this treatment.

A passion for science outreach and communication led to John’s work in helping set up Newcastle’s Supernova Hands-on Science Centre with Professor Tim Roberts in the late 1970s, an early involvement in the establishment of Canberra’s Questacon, setting up the SMART program and establishing the Science and Engineering Challenge, a national outreach initiative that won the Sir William Hudson award for Outstanding Engineering Excellence in 2003.

Over his 35+ years at UON, Professor O’Connor has developed a range of tools and techniques to benefit other surface and medical physicists; identifying and measuring holes in existing data.

For over 17 years, the Challenge has inspired generations of year 10 students into further study into mathematics, science and engineering. In fact, data collected over the life of the program has revealed that this successful outreach initiative has led to a very positive impact on enrolment in higher education in the science, mathematics and engineering fields at UON.

Sharing his passion for science has led to regular radio appearances, and, excitingly, an appearance on stage with author Douglas Adams, author of Hitchhikers Guide To The Galaxy for Science in the Pub – bringing the wonders of science to the public.

Close collaborations from Newcastle to China

International collaboration is an ongoing theme of John’s career. He has been working on new advanced materials which are resistant to radiation damage likely to be experienced in nuclear reactors with a team from Fudan University, where  the primary focus is on finding new advanced materials for nuclear fusion reactors.  The prototype fusion reactor is being built in France at present by a multinational consortium of leading science countries but future power generation reactors will need better materials.

How physics can address climate change

One of the most complex situations that society is currently facing is climate change and we need to look to alternative energy methods to address this. “Fusion is a solution to climate change, but we’re not investing enough in its research. Nuclear fusion doesn’t produce radioactive material: its waste product is helium which is so safe that it is used in party balloons. ” says John. “Fusion is a complex procedure, and is more difficult to create than fission. With fusion you have to produce something here on earth that occurs in the core of the sun. This is clean, baseload energy that we could use in conjunction with solar and other renewable sources.”

“In the 1980s they worked out a roadmap for producing energy from fusion by the year 2000, and they worked out how much it would cost. At the moment, the world’s major countries are participating in The International Thermo-nuclear Experimental Reactor (ITER), a $16 billion project, which will build the world’s biggest fusion reactor in France by 2025. The total amount of money that it will cost is the same as if we’d started back in the 1980s, but the oil crisis came to a halt and they stopped investing in the project. But fusion’s the energy of the future.”

Another international collaboration is with a colleague from Imperial College working on their Low Energy Ion Scattering (LEIS) instrument which is ideally suited to measuring the surface atomic layer composition of materials.  This machine was also used in collaboration with UON to make measurements with Rob Atkin, Director of the Priority Research Centre for Advanced Fluids and Interfaces, and his PhD student looking at the surface atomic layer composition of the ionic liquids and deep eutectic liquids.

With an infectious passion for science, John has, through his teaching, research and science communication outreach,  inspired a new generation of curious minds intent on disruptive technology.