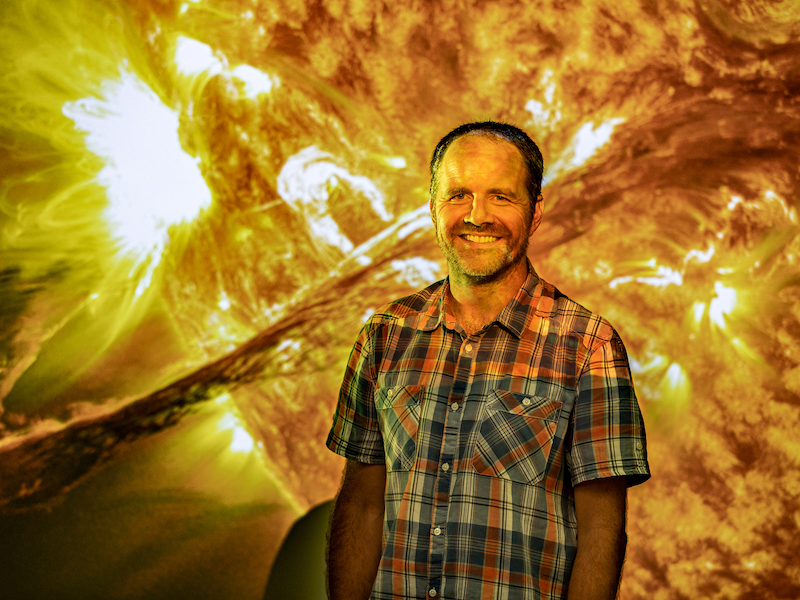 Did you know that the sun’s atmosphere is thousands of times hotter than its surface — but we don’t really know why? Or that its magnetic fields propel solar winds across the solar system at around 400 to 800 kilometres per second?

Associate Professor David Pontin explores these anomalies of space through his study of astrophysical plasmas, especially those surrounding the sun.

With his extensive background in both the field of physics and mathematics, David offers a unique perspective on some of our biggest space-age questions.

“How is energy and heat transported through the solar atmosphere, making the sun’s outer layers thousands of times hotter than the surface and driving flares and eruptions?”

“How is the solar wind accelerated, and what processes control where it is fast or slow?

The question of why the sun’s atmosphere is thousands of times hotter than its surface remains a big challenge, and one that continues to captivate David and his research peers.

“We know that the sun’s magnetic field plays a crucial role in heating the plasma.

“It is also responsible, in ways that we don’t fully understand, for accelerating the ‘solar wind’ outwards across the solar system, as well as producing violent eruptions in the sun’s atmosphere.

“The ‘solar storm’ and solar wind stream past the earth at between 400 and 800 kilometres per second, and together produce ‘space weather’ in the earth’s upper atmosphere.”

For us here on the ground, we’re protected from the damaging effects of solar storms and space weather through the earth’s atmosphere and magnetic field.

But, according to David, these events can pose significant problems for spacecrafts, satellites, GPS signals and radar. And a large enough solar storm could also damage power distribution networks and pipelines.

By understanding the sun’s physics, David believes that we can also learn a whole lot more about the behaviour of other, more distant stars — and, in turn, about the habitability of planets in those stellar systems.

“The sun provides us a unique ‘laboratory’ for understanding the processes going on in much more distant objects out in the Universe.

“Unfortunately, we do not have the technology to reproduce here on earth the plasma conditions on the sun, and the equations that govern the behaviour of plasmas are extremely challenging to solve.

“This means that a careful combination of techniques is required to try to unravel the mysteries that the sun presents us with.”

David’s work comes at a pivotal time in our culture, where global society is coming to increasingly rely on space-based technologies.

These technologies are immersed in our everyday lives, such as through our mobile phones or GPS systems, and are vulnerable to disruption from adverse weather events in space.

“Estimates of the economic losses due to a severe space weather event are in the hundreds of billions of dollars. The satellite industry and space sector in general have been identified by the Australian government as a key area for economic growth.”

David’s research is keeping up with the demands of the satellite industry and space sector, facilitating improvements in space weather forecasting capabilities so that future innovations, such as GPS systems for driverless cars, are plausible.

David is not alone in his research. He collaborates with the likes of NASA and the Bureau of Meteorology in Australia who help to inform his studies.

“These collaborations help to ensure that our research is informed by the latest spacecraft data, and also that it is disseminated widely to other researchers who are working directly on developing the latest space-weather forecasting tools.

“Recently, we have been in discussions with the Bureau of Meteorology here in Australia who run a Space Weather Prediction Service with customers that include power distributors and the military.”

David enjoys working in collaboration with others, both locally and internationally. And one of the most rewarding parts of his job is to mentor students and researchers in a field that he is incredibly passionate about.

“Meeting with students, postdocs, and colleagues, having informal chats around the whiteboard, sketching ideas and throwing concepts backwards and forwards can be really fun. It is also great fun to go to conferences and share ideas with colleagues, often leading to new collaborations.”

With so many answers left to uncover, David is excited to continue his research and analysis of astrophysical plasmas, ultimately having a lasting impact on the exploration of space and the future of space-based technologies.