Professor Yong-Ling Ruan from the University of Newcastle’s School of Environmental and Life Sciences is supercharging plants, to ensure their survival and thrive, and ours. 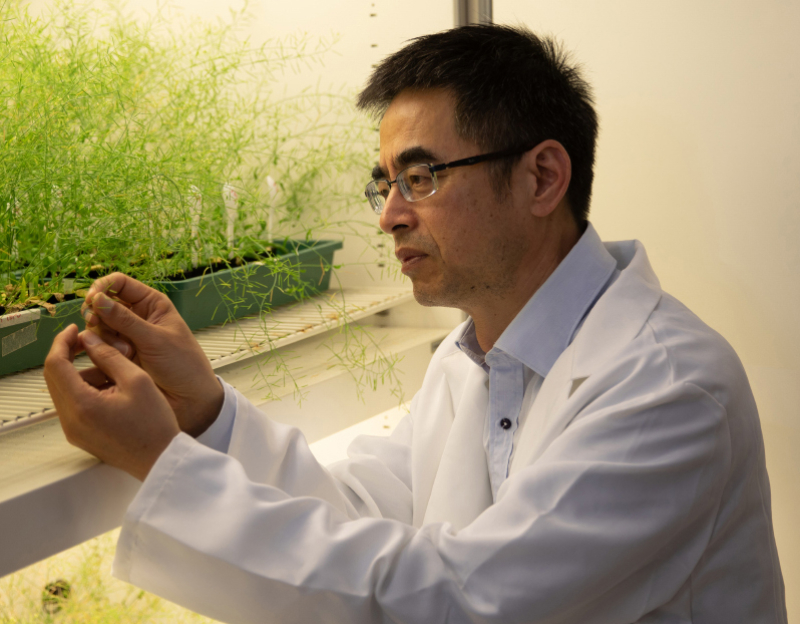 His work has become particularly urgent in recent years due to projections that we will need to double world crop yield by 2050, feeding more people with less arable land.

Add the need for more food to the increased incidence of global warming-associated drought, salt and heat stresses, plus pathogen and pest infections; and futureproofing plants could be paramount to our survival.

Plants are already extraordinary, having long ago developed unique capacities to feed themselves using raw elements from the environment without the need to wander around searching for food.

Unfolding their leaves as solar panels, plants use light to spark biochemical reactions that convert atmospheric CO2 into sucrose. This essential nutrient and energy currency not only powers growth, but also fortifies defences against all sorts of stresses, pathogens and pest attacks.

With leaves producing the fuel, the rest of the plant’s organs - the roots, stems, seeds, and fruits - rely on the rationing of sucrose for their growth.

But what mechanisms govern sucrose allocation between leaves and other organs? What genes and signals control this carbon nutrient distribution from subcellular to whole plant levels? How did partitioning evolve alongside plants as they grew ever more complex from algae to moss to vascular plants?

By using molecular, cellular, genetic and evolutionary approaches, Professor Ruan’s research generates knowledge on how plants work out and allocate their nutrient ‘budget’.

“The partitioning of a plant’s sucrose between source and sink organs determines plant architecture and crop yield,” Professor Ruan says.

“Optimising this process would allow for the development of the super plants by identifying biological bottlenecks to improve plant fitness, fertility and food and fibre production.”

“I am fascinated by the question of how plants make their budget, and what genes control the allocation of resources and energy currency among different organs and cells,” he explains.

“How we can optimize the processes using biotechnology to breed ‘ideal crops’ that are higher-yielding and resilient to Climate Change?”

His ultimate goal is to develop novel solutions to improve crop productivity & tolerance to environmental stresses such as heat & drought, which would make world changing impacts on sustainable agriculture and social stability worldwide.

“We have made novel findings on how to sustain plant reproductive success under heat stress and how plant cells ‘talk’ to each other through membrane transporters or pores to coordinate their growth and development.”

Funding bodies agree his work is worth the investment. He continually secures highly competitive ARC Discovery grants, being a recipient of almost $4 million dollars of research funding in the years between 2008 and 2018.

His best Eureka moments include the discovery of a genetic mechanism controlling fibre initiation in cotton seed and the finding that genetically accelerating the conversion of sucrose into glucose and fructose delayed leaf aging and increased seed weight.

Professor Ruan’s work has attracted the interest of industry bodies including the Australian Grain Research Corporation (GRDC), who have funded a national collaborative project to develop solutions to boost grain yield under heat stress in wheat, the most important crop in Australia and worldwide.

“Our findings provide critical knowledge and candidate genes for breeders worldwide to develop next generation cultivars that are high yielding and future climate proofing.”

With a focus on translational research that links basic scientific findings to applications, Ruan’s team have filed three international patents on novel ways to improve seed and fibre yield and quality.

As a pioneer in his sector, Professor Ruan has developed strong ties with several international teams in his arena. Extensive and productive international collaborations with top institutes in Australia, China, Germany and USA have contributed significantly to his group’s research productivity and impact.

His passion has seen him much lauded. His early career efforts saw him awarded the prestigious Peter Goldacre Medal from Australian Society of Plant Scientists, and the Distinguished Young Scientist Award from National Science Foundation of China. In 2019 he was appointed to ARC College of Experts. He has served as founding Director of Australian-China Research Centre for Crop Improvement since 2008.

But ever humble, Professor Ruan wants you to know it’s never the applause that inspires his work.

“Naturally, it is nice to be recognized by the international scientific peers. And I am proud of my team members comprised of students, postdocs and national and international collaborators who are diligent, smart and collegiate,” he says.

“However, fundamentally, it is the love of science, the excitement of new discoveries and the new insights gained into biology that drives my research.”