People have the power

For many people, anarchy is a frightening concept, associated with chaos and violence. Professor Simon Springer argues this misconception could not be further from the truth. 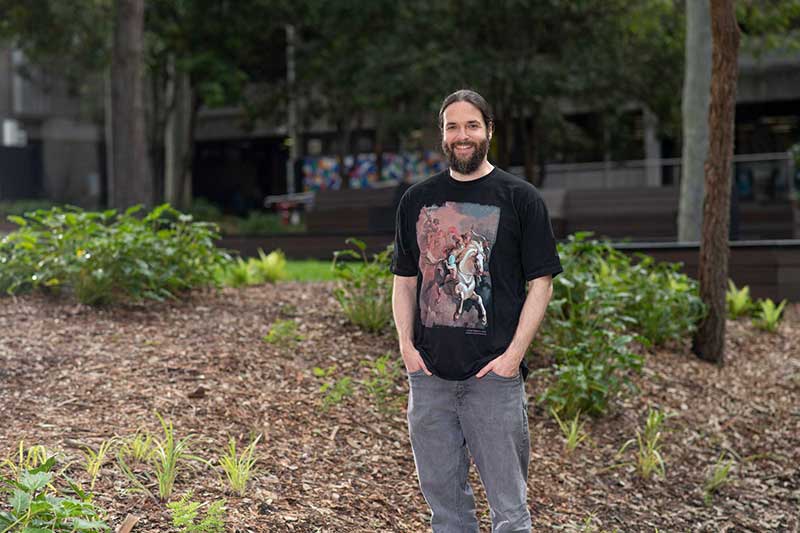 A Professor of Human Geography, Simon is the Director of the Centre for Urban and Regional Studies at the UON. He works in the area of social and political geography, with a particular interest in anarchist philosophy.

He wants you to know that anarchy is not about burning banks or storming parliament.

“The way that the bulk of society interprets anarchism, and the motivations of anarchists, are entirely off base,” he says.

Instead, Simon argues that the history of anarchist theory and practice primarily centres on the promotion of cooperation and mutual aid through voluntary association and non-hierarchical organization.

Hence, his work is more about the power of community than revolutionary chaos. He even describes the focus of his work as the everyday practices of anarchism in mundane spaces.

“Agreeing to watch your neighbours kids, carpooling to work, sharing a meal with some friends. These are all routine practices of mutual aid, which is what the heart of anarchist practice is all about.”

The path of mutual aid

Simon arrived at UON in 2019 after successful stints in New Zealand, Singapore and Canada, the site of many on-going collaborations and supervisions. A prolific writer, Simon brings with him a publishing legacy of 31 chapters, 13 books, 64 journal articles and more than $1 million in funding across three nations.

He has a particular interest in anarchism in practice in Cambodia. Interestingly, in 2018 he received the Sovereign‘s Medal for Volunteers from the Governor General of Canada for his work with homeless people in Cambodia.

“I work a lot with homeless peoples, particularly in the context of Cambodia, where you see street-engaged people with very meagre means to support themselves nonetheless willing to assist each other. They practice mutual aid on a daily basis as a matter of survival.”

The irony of an award bestowed through an overtly hierarchical system is not lost on Simon, who suggests it speaks to how a focus on mutual aid can actually inspire us on the path towards achieving greater social justice.

“While these Cambodians would never identify as ‘anarchists’, it is not so much the label itself that is important, but rather the underlying principles of cooperation and care.”

So anarchy does not involve even just a little bit of burning and rioting?

“If we look at the root of the word we recognize that ‘archism’ signifies a system of rule, or a mode of domination. ‘An-archism’ then is against such an arrangement of power, and represents a challenge to its coercive application,” Simon explains.

“So, any time we enter violence into our repertoire, whatever it is we are doing ceases to be ‘anarchism’ and simply reproduces a system of domination.”

That’s not to say there is no struggle involved with Simon’s research.

Ironically, one of the biggest barriers to the societal rejection of domination is the reactionary response that some people have to an anarchist critique of society.

“Some assume that authority, hierarchy, and domination are ‘natural’. But as social scientists have long known, our systems of governance and the way we organize ourselves are constructed through cultural values,” Simon explains.

“If we want a more equitable society where inclusion and social justice are foregrounded, then we have to stop repeating the fictional narrative that we, as humans, are somehow inherently prone to domination and that hierarchies are the natural order of things.

“This argument is essentially a suggestion that some people have more worth than others and those who supposedly have less value need to be ruled.”

In contrast, Simon says, anarchists have a faith in the human capacity to experiment with different ideas and practices, and an understanding that the world is whatever we decide to make it.

And therein lies the aim of his work.

“I strive to make a difference through challenging people to re-examine what they think they know about human relations, and start to see the potential for togetherness and mutual support that comes when we are willing to entertain different modes of organizing ourselves.”

He stresses he is not out to convince everyone that they should suddenly begin to identify as anarchists, but hopes we will give more thought to the need for mutual aid and cooperation in our world.

So forget storming jails and burning down parliament, let’s start by sharing our lunch.

“The way we engage in most friendships is a practice of mutual aid and care, which in effect is what anarchism is all about. When we build friendships on mutual respect and support, we are acting in ways that imply the underlying principles of anarchism.”

“The goal then is to consider how practices of sharing and caring can be promoted on a wider societal level to refashion our political systems in more democratic, accountable, and non-hierarchical ways.”