Giving birth to a better world

Laureate Professor John Aitken believes creating better methods of contraception and curing infertility are the two single most important issues facing the world - and this global authority on reproductive biology is leading the charge to achieve both.

Professor Aitken, who arrived from the University of Edinburgh to take up a Chair in Biological Sciences at the University of Newcastle in 1999, is now a leader of a 50-strong research team studying fertility and contraception, which has attracted almost $50 million in funding.

"Each year the reproductive needs of some 120 million couples worldwide go unmet. I believe that finding more effective ways to control fertility is a critical global issue while, at an individual level, we should never forget the large number of couples seeking safe, effective solutions to their infertility," Professor Aitken, Director of the University of Newcastle's Priority Research Centre for Reproductive Science said.

"Essentially, all the world's problems are, one way or the other, connected to sustainable world population growth. If we get control of populations numbers, we can solve many of the difficulties facing mankind."

The 2012 New South Wales Scientist of the Year says the 'urgent need' to develop better contraception is demonstrated by the 46 million abortions performed worldwide every year due to people falling pregnant unintentionally. In Australia one in five pregnancies are aborted each year, equalling around 70,000 terminations, many in the under 19 or over 40 age groups.

"I regard abortion not as a moral failure but a contraception failure. We just don't have the right methods to empower women to control their own fertility," he said.

"If you think about human contraception it hasn't actually moved on since the contraceptive pill was introduced in 1960 and that was based on the biochemistry of the 1930s. When you think of all the miracles of modern medicine that have transformed healthcare in the last century here is something that touches all of our lives and it has been totally neglected."

Professor Aitken said the compound, which may eventually take the form of a sponge or vaginal ring, to be inserted two to three days before sexual intercourse, is activated only when in contact with semen.

"The invention is ground-breaking in that the compound does not kill sperm but targets their ability to swim, and is therefore much safer for women. If the chemical succeeds in both animal and human trials, it will be the first major advance in contraception since the pill was introduced more than five decades ago."

Professor Aitken said the discovery had the potential to address the global pandemic in sexually transmitted diseases.

In addition to this potentially revolutionary contraception for women, Professor Aitken and his research team are chasing the holy grail – a male contraceptive pill.

"Our reproductive science group covers everything from conception, sperm and egg meeting one another and fertilising the egg and the very early stages of development all the way through to parturition and at both ends of the reproductive process there are pathological problems that we're interested in trying to solve." 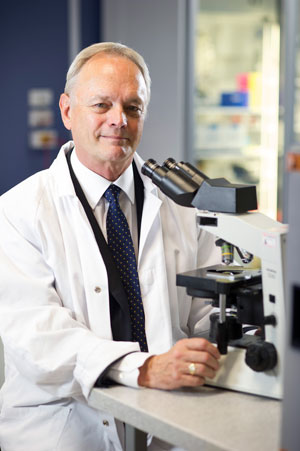 Some of Professor Aitken's most notable achievements have been at the opposite end of the reproductive spectrum: assisting those with fertility issues. His speciality is the largely neglected field of male reproduction.

While working at the University of Edinburgh in the late 1980s Professor Aitken uncovered a major cause of male infertility; molecules generated by smoking, obesity and age, known as free radicals, could attack sperm DNA. Today, thousands of men with infertility problems take antioxidants – the treatment against free-radical generation.

More recently he has developed a method for selecting the best sperm from ejaculate, which makes the process of sperm separation for in vitro fertilisation faster and more accurate.

"In assisted conception, the best sperm needs to be selected because it will impact the development potential of the embryo," he explains.

His research led to the development of a separating device called the CS10, manufactured in conjunction with life sciences company NuSep. Set for a commercial launch in 2015, it has the potential to snare a substantial share of the world market estimated to be worth more than $100 million a year.
Currently in Australia, one in 30 children is the product of Assisted Reproductive Technology (ART), however this achievement raises some issues.

"We live in strange times in having this strange dichotomy between people who are desperate to have pregnancies and those who are aborting their pregnancies," he said.

As the 2012 NSW Scientist of the Year Professor Aitken is urging a renewed focus on the development of 21st century methods of female contraception, more attention on the causes of male infertility and frank discussions about the increased use of ART as women delay having babies.

"We need to understand this headlong rush into ART is going to have a long-term impact on the health and well-being of future generations."

During the 40 years Professor Aitken has been working to uncover the intricacies of the union between sperm and egg he has published over 480 research articles, given more than 350 invited lectures and filed 12 patents. His work has been cited >16,000 times (h-index of 70), the highest citation index in his field.

Since arriving in Newcastle he has generated more than $37 million in research income and has been continuously funded by both the Australian Research Council (ARC) and the National Health and Medical Research Council (NHMRC). He has been elected a Fellow of both the Royal Society of Edinburgh and the Australian Academy of Science and is currently President of the International Society of Andrology.

The world-renowned reproductive biologist has worked and studied at some of the world's most prestigious research institutes including Cambridge and the World Health Organisation, but says there is no place he would rather be than Newcastle.

"The University of Newcastle is less than 50 years old and it's already in the top 3 per cent of the world's universities. That achievement is amazing and should be recognised as such. Universities are not bricks and mortar - universities are people and there are some fantastic people in this university and I'm very proud to be a member of that community.

"This is a very exciting time to be in Newcastle. It's changing very dramatically and the University will be a major force in driving the future development of the region."

Learn more about John and his work: