Finding better ways to regulate fertility has been a career crusade for Professor John Aitken.

It may have been the promise of better weather that first lured Laureate Professor John Aitken to Newcastle, but it is the intellectual challenge that has kept him here.

Aitken, a global authority on reproductive biology, arrived from the University of Edinburgh to take up a Chair in Biological Sciences in 1999. He is now a leader of a 150-strong research team studying fertility and contraception, which has attracted nearly $50 million in funding in that time.

"On a world scale, a team of 150 people working solely on reproductive science is significant. It is an enormous commitment by the University to the area, " says Aitken, a co-director of the University's Centre for Reproductive Science.

Reproduction has always fascinated Aitken. As an undergraduate in London studying zoology, he was intrigued by the "amazing process of how we start from a single cell and develop into an entire organism ".

Postgraduate studies in reproductive biology followed and by the age of 25 he was working with the World Health Organisation (WHO), overseeing a multi-million-dollar series of research projects into fertility regulation. It was a defining period in his career.

"The problems ailing our species – poverty, pestilence, war, famine – all have their root cause in unsustainable population growth, " the widely cited academic says.

"I concluded that the most pressing challenge for biologists is to determine how to control population growth. "

While the WHO experience gave him an insight into the need for more accessible and effective forms of contraception, some of Aitken's most notable achievements have been at the opposite end of the reproductive spectrum: assisting those who have problems with fertility. His speciality is the largely neglected field of the male reproduction.

Aitken, a recent inductee to the select group of Fellows of the Australian Academy of Science, has made some significant breakthroughs in the understanding of male fertility with his team at the centre.

He has developed a method of selecting the best sperm from ejaculate which makes the process of sperm separation for in vitro fertilisation faster and more accurate.

"In assisted conception, the best sperm needs to be selected because it will impact the development potential of the embryo, " he explains. 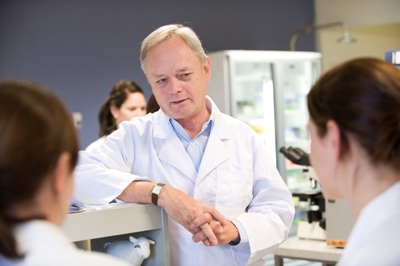 "Our research found that the best sperm also carry the highest net negative charge. In our process, the sperm cells are placed in an electric field and those that move towards the anode (the positively charged electrode) are the 'good guys'.

"This separating process achieves in approximately five minutes a task that takes conventional technology about 45 minutes to complete."

The research led to the development of a separating device called the CS10, manufactured in conjunction with life sciences company NuSep. It is set for a commercial launch in 2012, following clinical trials, and has the potential to snare a substantial share of a world market estimated to be worth $100 million annually.

In another research project, he collaborated with colleague Dr Brett Nixon to discover that sterility in some men could be related to the absence of a 'chaperone' protein which is needed to allow sperm to recognise an egg cell.

"Biologically, sperm-egg union is a miracle; 200 million sperm cells are released into the female tract and they have to find one other cell in the body," Aitken says.

"The sperm-egg recognition process is akin to a gunslinger in the Wild West – the sperm keep their receptors for the egg in their 'holster' and only transport them to the surface as they hone in on the egg."

The process is orchestrated by the 'chaperone' proteins.  Among infertile men, the corralling of the receptors and their presentation on the surface of the cell does not occur due to the absence of chaperone proteins.

"Our research is trying to find out why these molecular proteins are missing, which will hopefully lead us back to the origins of the infertility."

In the area of fertility control, Aitken has received a donation from The Bill and Melinda Gates Foundation to research the development of a novel drug for use in developing countries that would both provide both contraception and protection against sexually transmitted diseases.

"I think better methods of fertility regulation and curing infertility are the two single most important issues facing the world," Aitken says.

"Every year the reproductive needs of 400 million couples go unmet. It is up to scientists working in public sector institutions such as Newcastle to make the breakthroughs that will lead to those new methods."