Coastal morphologist and geologist Dr Hannah Power is translating her research by collaborating with governments and councils so they can better manage coastal environments. 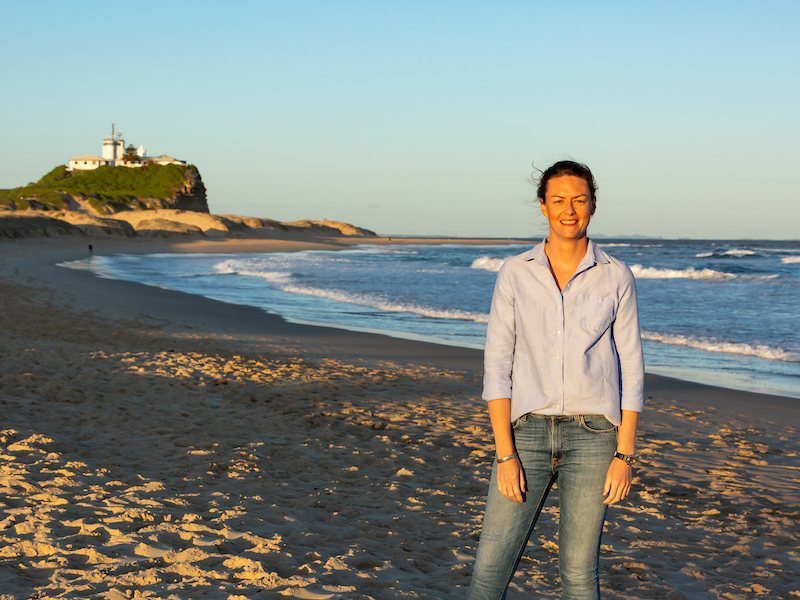 What many of us don’t realise is that our coastlines are constantly changing. So when it comes to optimal coastal management, there is no one-size-fits-all approach.

Hannah researches the processes and morphology of coastal environments by utilising field studies, remote sensing and modelling to investigate a range of diverse environments and processes such as tropical coral reefs, sandy beaches and hazards such as tsunami. This work enables us to understand the drivers that impact erosion and deliver the evidence needed for coastal risk assessment and long-term planning.

“In Australia we’ve been so lucky that we have such beautiful coastlines that we’ve been able to preserve for so long,” Hannah says. “Culturally we’re just not used to the idea of the actual beach being a highly modified environment.”

“We live on the fringes of this country,” Hannah says. “Around 85% of the Australian population live within 50 kilometres of the coast, and around 50% live within about 7 kilometres.” The Australian identity is closely tied to the beach and how we use it.

When it comes to coastal management, there are a lot of vested interests: residents, local councils, surfers and swimmers, state governments – and the scientists like Hannah who study coastal morphology.

‘How do we balance the desire to protect the amenities of the beach and the areas behind it?’ is just one of the challenging questions that Hannah’s work strives to answer. “The issue is cyclical: how you define the actual beach as existing depends on the timeframe. If we look at one day, it sits within the range that gets wet by the tide. But over a much longer timescale, and factoring in big storms, that blows out to a much bigger area.”

“When planning for the future, we have to think about what our beaches are going to look like in 10, 20 or 50 years,” Hannah says.

The challenge in this country is that, in places, we’ve built on what is effectively the active beach system. “That’s why we’ve had dramatic impacts in NSW like at Collaroy and Narabeen where we’ve seen pools and people’s verandas falling onto the beach,” Hannah says.

And scenes such as these are only going to become more commonplace. “Rising sea levels effectively mean we’re going to have less and less of a buffer between the ocean and the infrastructure behind it.”

Weighing up the options

Hannah is now turning her expertise to translating her research to advise governments on coastal management. In May 2020 Hannah was appointed via a competitive process to the NSW Coastal Council, where she is working alongside experts in local government, economics and local history to provide advice to the NSW Minister for Local Government on the development and implementation of coastal management programs by local councils.

“I’m looking forward to using my skills and knowledge to enhance coastal management around the state,” Hannah says.  They’ve done a really good job of selecting a panel that covers off a range of expertise that’s relevant to managing the coast.”

Hannah says that the Coastal Management Act, which commenced in 2018, is a positive step forward when it comes to effectively and collaboratively managing our environment. “It really changed the way that councils and local governments were encouraged to think about how they managed their coast. It’s aiming to develop a more wholistic system where we think about how estuaries and open coast systems are connected.”

“The act encourages councils that share adjacent sections of coast to communicate with each other,” Hannah says. “For example, City of Newcastle and Port Stephens Council share a stretch of coast from Stockton up to Anna Bay and there’s a legislative boundary in the middle. But of course, the sand doesn’t stop there, so thanks to this relatively new act, the two councils are required to consult with each other around their management of that stretch of coastline.”

Managing the coast is complex. “A lot of the structures we’ve built are not very moveable,” Hannah says. “There are a range of options: do nothing, which is the cheapest option, but has long-term ramifications. Or we can build hard seawalls everywhere – but that’s quite costly and while it protects the structures and property, it can have a negative impact on the amenity of the coastal system – which is what we’re seeing at Mitchell Street in Stockton.”

“There are other options in between like ‘retreat and relocate’ – which involves picking everything up and moving it backwards,” Hannah says. “But that’s not often an option that communities are particularly amenable to because it means reshaping what the community looks like.”

Hannah notes that there are some good examples of coastal management, both in Australia and overseas. “But the problem is that coastal management is very site-specific,” Hannah says. “Solutions have to be really unique to sites because each community will have different viewpoints about what’s acceptable and what’s not. And often you’ll have different groups and opinions within each community as well.”

Hannah’s background in modelling ocean waves and how they affect the movement of sand and sediment comes to the fore in long-term planning. Her work underpins the effective management of sustainable coastal environments through predicting beach erosion and how beaches change over time. “It’s really important that we understand the environment before delivering engineering solutions to problems,” Hannah says.

“You also need to understand the economics of that situation and work with all the different groups to decide which management options are going to suit that community best. It’s a huge puzzle and there are so many pieces in it.”

One of Hannah’s recent collaborative projects was working with the NSW Department of Planning, Industry and Environment on the Figure Eight Rock Platform, a site in the Royal National Park in Sydney that went viral on social media due to unique rock pools, including one formed in the shape of a figure 8.

“There were huge issues because all these people were going there with no knowledge about what it’s like to go for a two and a half hour bushwalk to get to a site, they weren’t looking at what the conditions or the tides were like, and they were going to a site that’s really quite exposed,” Hannah says.

“One summer there were 16 major emergencies where people had to be helicoptered out or ambulance parties had to trek in and treat people so they were capable of walking out themselves.”

With this project, Hannah and her team collected data on the conditions that resulted in inundation and waves washing over the area and that was combined with wave and tide forecasts. “So now, you get a four-day forecast on the website with recommended risk levels and information about when the pools are most visible and safe to visit.”

Since its launch, more than 70% of page visitors have interacted with the wave risk rating levels. (hashtag: success!)

Science communication and the politics of ‘fake news’

Hannah’s work focuses on coastal erosion and coastal hazard risk reduction, but she notes that the impacts of climate change are playing an increasingly important role in her work with estuaries (the freshwater lakes and harbours that have a connection with the ocean).

“Coastal erosion is in people’s faces when they walk down to the beach and see less sand than there was last week,” Hannah says. “Or they see images on the news of people’s houses at risk of falling into the sea.”

“Our infrastructure around estuaries, on the other hand, is actually much more exposed to sea level rise because we’ve built so close to the estuaries,” Hannah says. “But this problem isn’t as obvious to the naked eye because it’s more gradual and isn’t impacted by something dramatic like waves.”

This where Hannah’s dedication to science communication and education comes to the fore, sharing the science behind the dramatic images we see on the news. “Climate change in itself is emotive because there’s so much misinformation and because it’s become so politicised. This poses a real challenge.”

However, it’s a challenge that Hannah has taken on, appearing regularly on national and local radio, and sharing her science with the public at events such as Pint of Science where she’s twice been invited to present. This passion for education is also evident in her teaching, where she’s taken an active role in developing new undergraduate and postgraduate courses.

In her teaching, Hannah focuses on a triple-pronged approach: teaching the fundamentals of science, encouraging critical thinking, and instilling in students a desire to research evidence-based solutions to current problems and issues. It’s the same approach that Hannah is taking with her research, enabling her to work alongside government agencies, industry and communities to deliver better long-term solutions to Australia’s coastal environments.