A gendered view of performance

Dr Xanne Janse de Jonge is placing the little-explored field of female hormones in sport performance in the research spotlight. 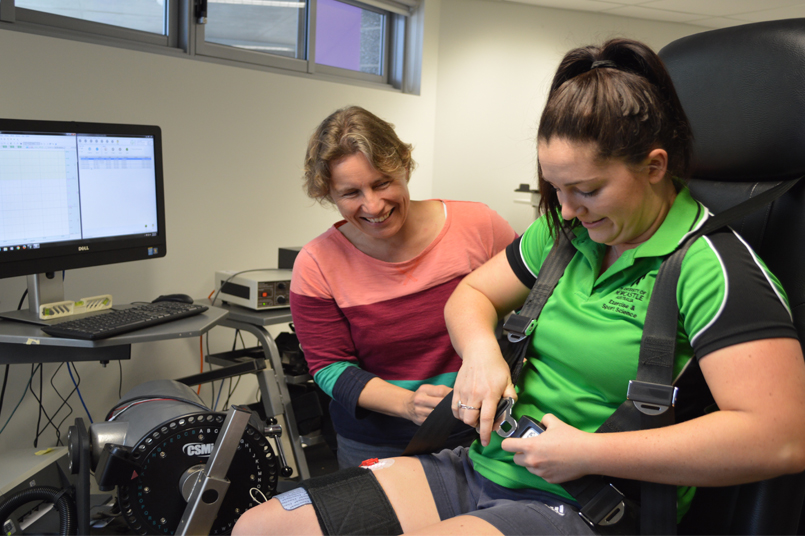 The gender divide in science has oft-seen research focusing on humans in general, rather than differentiating men and women. The fundamental biological differences between men and women are under-explored, with women under-represented in a range of medical studies. It’s an area that Xanne is examining in her work on women and exercise performance.

An ongoing curiosity about how the body worked had people suggesting Xanne pursue a career in medicine – but she sought a more sporting-bent. “What got me into studying Sport Science was mainly my own competitive sport background,” Xanne explains.

“Throughout high school I was involved in rowing at a high level, competing at World Championships and other events. And that made me think ‘What’s actually happening to my body with this much training and what do we really know about this?’.”

Upon completing her ‘doctorandus’ studies in Amsterdam (Bachelor’s and Master’s), Xanne spent four years travelling between Australia and the Netherlands on various research scholarships before undertaking her PhD at Sydney Uni. Her research topic was on the menstrual cycle and exercise performance and it was during this time that her interest in focussing on women through sport science was cemented. “It’s an area that’s typically been underexplored as most of the research in sport science is conducted with male participants. But now we’re saying, ‘hang on, can we really just apply that theory to females or should we look at them separately?’”

“When I first came to Australia I was working with a PhD student who was exploring females and aspects of ageing,” Xanne says.” As a control group, she asked Xanne to test a group of younger women.”

“We did strength testing and when I started analysing the data there was a really big variation in the results. So I started looking deeper and realised that what we really needed to ask was which stage of the cycle the women were in, and whether they were on oral contraceptives. That really got my interest up as when I was trying to explain the large variation of results I thought it’s probably because of female hormones so that’s why I started working on it.”

It’s not just the menstrual cycle that Xanne is researching, she’s also exploring the impact of oral contraceptives on hormone fluctuations, and won’t stop there. “But of course you can look through the whole life-cycle including menopause and Hormone Replacement Therapy,” says Xanne with increasing excitement and enthusiasm. “There’s already been some research in that area where they’ve shown a difference in strength between older women on HRT and those without and that’s what we’re trying to ascertain – do natural hormonal fluctuations during the menstrual cycle and synthetic hormones in the oral contraceptive pill give you that same effect?”

UON Central Coast is a hub for exercise and sport science, with many researchers working with local sporting groups. Upon arriving at UON Xanne approached the Central Coast Mariners Football team and has been working with them for over 10 years now. “We’re monitoring whether players are ready to compete or train again after matches. We’re working with the players after matches and do some wellness and physical fitness tests to provide feedback to their coaches on whether they’re ready to train – or if they might need some rest or rehab first”.

While it was competitive rowing that first sparked Xanne’s interest in sport science, it’s Judo that’s Xanne’s current focus working with the national team and being on the Sport Science Advisory committee, helping with coaching and more. “I think it’s really important for research academics to show that they’re passionate about the field they’re working in,” says Xanne. “I love to do judo and go to the gym with the kids. The whole family is involved in judo, so we try to fit the rest of life around it.”

Xanne feels that she’s barely scratched the surface in terms of research into women, hormones and performance, “I’d love to gather a few more HDR students to really explore this topic,” she says.

One of the problems Xanne faces in pursuing her research is in recruiting enough women participants to study. “You need to find enough females that have regular cycles to commit to three months of training,” Xanne explains.

“In around 30 per cent of women the hormones don’t do what we expect them to – there are so many variations in the cycle. You can have your period without regular ovulating, so the hormones that women experience aren’t similar.”

In order to understand the women’s cycle, Xanne and her team take blood samples at three different times of the month to assess hormone levels and have the women do a urine test at ovulation time. “We then ask the women to advise the team when they get their period.” All this information is needed to make sure the women are tested at the right time in their cycle.

Xanne’s early work explored the hormonal cycle and its impact on muscle function (strength), but now she’s exploring how training can be adapted over the cycle. Xanne and her team are exploring if training more at certain times of the cycle will result in better and quicker training responses, such as an increase in strength. She has also explored temperature regulation; “With endurance exercise in hot conditions this definitely has an adverse effect,” Xanne says. “When you’re already hot for the two weeks after ovulation and you then start exercising in the heat, it only makes sense that you won’t perform as well.”

Xanne is one of a small team of global collaborators exploring this field. “I’ve got a PhD student coming from Spain to work with us for the last few months of her research, and we also have links in the US.”

Performance doesn’t only apply to sport performance, Xanne is also translating her work for the Defence Force and military, “We’re exploring the discussion around women in combat roles and which roles they’re suited to and how to best prepare them. It’s a new area that I’ve been invited to speak about at an International Symposium.”

It’s not just elite athletes who will benefit from this work – it will be applicable to all the female population - even if it’s just about motivation to go to the gym! “If you know that exercise is easier at certain times of the cycle, then you can plan your exercise routine around that.”