As a child, Professor Chris Grof idled hours away with his siblings in the family car while his father disappeared into fields to investigate a rare plant he had spotted while driving.

While Grof did not inherit his father's habit for impromptu roadside stops, the third-generation biologist says a love of plant science has been carried through the generations. In Grof, that passion for plants has developed into a quest to engineer a viable biofuel that could reduce Australians' reliance on fossil fuels.

Fossil fuels account for 98 per cent of Australia's transport energy needs but pioneering countries such as Brazil, which uses ethanol derived from sugarcane for about one quarter of its transport, have proved that a more substantial biofuels industry is feasible.

Australia's main source of ethanol for biofuel is sugarcane, a crop Grof studied extensively as a research scientist with the CSIRO for 13 years. His work into carbohydrate metabolism and genetic manipulation in sugarcane has drawn international recognition, resulting in a prestigious Underwood Fellowship from the British Biotechnology and Biological Sciences Council and invitations to address forums in Australia and overseas.

Since arriving in Newcastle three years ago to head up the Plant Science Group, Grof has taken a lead role in a research project to develop sorghum as a biofuel. Both sorghum and sugarcane share the same photosynthetic properties.

"Sugarcane is a recalcitrant plant and quite difficult to work with genetically, but with sorghum there is an incredible amount of genetic variability that can be used to introduce a whole host of different traits to the plant," he explains.

"Sorghum is already widely planted in Australia, so farmers know how to grow it, and it has limited use as a human food source, so there is no conflict with the supply of edible crops.

"It is quite drought-resistant and able to grow on marginal soils, so that means we may be able to produce a crop that does not compete for arable land that is being used to grow food."

Grof is supported by a strong team at the University. Their area of research, plant biology, achieved an Excellence in Research Australia rating of five, the highest score possible, rating their research well above world standard.

An emphasis of his research is developing second-generation biofuels. Second-generation technologies derive fuel from the whole of the plant, including the woody or fibrous parts known as the lignocellulosic matter, rather than extracting just the juice or oil, which was the traditional method of producing ethanol or other biofuels. 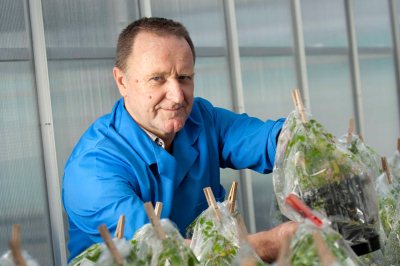 The advantages of second-generation fuels are that they increase the yield of fuel from the plant and can be derived either from crops that are not part of the food cycle or from the waste material of food crops, such as the stems, leaves and husks.

By manipulating the genetic make-up of the plant, Grof aims to elevate both the sugar content and biomass in order to maximise its use as a biofuel feedstock.

He has partnered with researchers from the University of Queensland under a project funded by the Australian Research Council and industry partner Pacific Seeds to produce cultivars of sweet sorghum with increased sugar concentration. He and his team also collaborate with research groups at Texas A&M University and India's ICRISAT (International Crops Research institute for the Semi-Arid Tropics).

To facilitate Grof's work, the University of Newcastle has committed to building a super-sized greenhouse, supported by a $500,000 ARC grant, to accommodate sorghum pants, which can grow to five metres in height.

"This is long-term research but it is very important for Australia," Grof says.

"Environmentally it is a priority because we need to move away from fossil fuels but it also offers the prospect of a sustainable domestic industry in fuel production, which has the potential to deliver major benefits for rural communities and the country as a whole."

Visit the Centre for Plant Science