Falling under the umbrella term of 'multidimensional assessment and individualised management,' Professor Vanessa McDonald's clinical research is helping to engineer a shift in the way patients with long-term respiratory problems are diagnosed and treated. 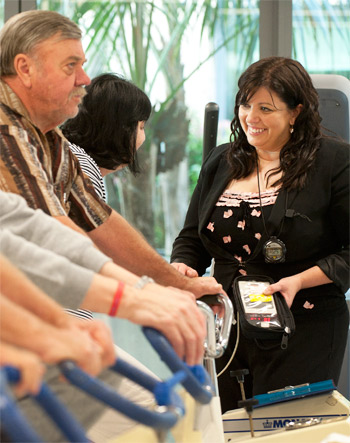 By all measures, McDonald is a prolific performer. Though just a few years out of her doctoral studies, the early career researcher has already procured a number of competitive grants, fellowships and scholarships, as well as a publication catalogue worthy of senior academics. She's also achieved marked success closer to home, winning the Vice-Chancellor's Researcher of the Year Award for 2014.

For a long time however, this wasn't the plan. McDonald took an unusual academic pathway to get to where she is at the Hunter Medical Research Institute, spending years as a clinical nurse consultant in respiratory medicine before deciding to undertake a PhD in the late 2000s.

'It was this first role that inspired the second one,' she reveals.

'Problems with approaches to management sparked my research interest in patients with lung disease.'

Still working clinically to 'maintain creativity and currency in terms of generating research ideas,' the esteemed educator and investigator is a master of many trades. She's working with and for patients suffering from complex respiratory conditions in all of these endeavours, focusing principally on chronic obstructive pulmonary disease (COPD), and the overlap of asthma and COPD in older populations, and bronchiectasis. McDonald is also especially interested in advancing care options for those with severe asthma.

There's a small group of patients with severe asthma who are refractory to treatment – we can throw as much traditional asthma medication at them as we like, but they're not going to respond.

'These are the people who have a huge but often preventable healthcare burden, yet little research has been done on management approaches for them.'

McDonald is examining respiratory problems from multiple perspectives in her research, concentrating on the pathophysiological components, functional and psychosocial needs of individual patients. This inventive quadrant approach, which encompasses comorbidity, risk factors, self-management and management of the airways, similarly serves to improve outcomes and help translate findings into scalable and fundable practice.

'Most clinical trials tend to recruit people with pure asthma for asthma studies, and pure COPD for COPD studies, but in the real world when we sit down with a patient, often their diagnosis is impure,' she explains.

'Clinical trials generate evidence that informs us on how to manage health conditions, but due to strict inclusion and exclusion criteria they often don't translate to the person sitting in front of us.'

McDonald characterised asthma and COPD overlap in the older person during her PhD candidature, focusing on the 'usually excluded' population with support from a National Health and Medical Research Council Centre for Respiratory and Sleep Medicine Scholarship. This research area involved collecting data from several sources to inform an intervention for a randomised control trial.

'I undertook qualitative analyses to develop insight into patient needs and healthcare experiences, as well as a cross-sectional study to understand what the population looks like,' she states.

'I then developed an intervention that was piloted in a clinical trial.'

'For example if participants had airway inflammation, the pharmacotherapy was individualised to that phenotype,' she advises.

'If they showed signs of anxiety or depression they underwent cognitive behaviour therapy, and if they were nicotine-dependent they underwent a smoking intervention.'

With results deemed 'quite outstanding' in terms of their impact on health status, McDonald's PhD was published in a top respiratory journal, Thorax, in early 2013.

'The findings demonstrated an improvement in health status that were three times the minimally clinically important difference,' she asserts.

'The intervention also improved the inflammatory processes and the number of exacerbations the patients experienced.'

The principal researcher in the University of Newcastle's Priority Research Centre for Asthma and Respiratory Disease has since followed up on this research, undertaking new studies to see whether the model is transferrable to a 'generally younger' severe asthma population.

A closer look at COPD

McDonald is continuing to develop a large and impressive body of work out of her PhD thesis.  She's the current recipient of the Lung Foundation of Australia's Research Fellowship, awarded annually to one academic from any medical, scientific or allied health background, and is currently using it to fund a study on medication options for patients with COPD.

'We are examining the inflammatory phenotypes of individual patients and targeting pharmacotherapy to these processes,' she clarifies.

'Drugs are used to control eosinophilic and neutrophilic airway inflammation.'

'Medication typically used in cardiovascular diseases, but which we know reduces the degree of systemic inflammation and improves outcomes in COPD, are also being used.'

The co-convenor of the Thoracic Society Australia and New Zealand Special Interest Group has devised a randomised control trial to test this approach, with the intervention group receiving active drugs to match their number of inflammatory phenotypes, and the control group receiving a placebo. Having established a national profile and an emerging international profile, McDonald is also evaluating the health status assessment of COPD patients with St George's London Hospital Professor of Medicine, Paul Jones.

In another offshoot of her PhD, McDonald is undertaking evaluations of a weight loss trial in COPD patients.

'We know that obesity has deleterious health effects, but there's an interesting paradox that exists in COPD where obese patients have better survival than those who are normal or underweight or even just a little overweight,' she discloses.

'It could be that maintenance of muscle mass plays a key role in this, though we're not certain.'

'At present there are no treatment recommendations for this population and advising COPD patients to lose weight could actually be doing harm.'

Coupled with a resistance-training program, the weight loss intervention was found to be successful in both achieving weight loss and maintaining muscle mass. It also resulted in improvements in health status, lung function and ability to carry out daily tasks.

'This pilot study is a proof of concept,' she explains.

'Now we're publishing the data and looking at obtaining an external grant to conduct a larger study and test its true efficacy.'

The energetic academic is simultaneously involved in several current and interdisciplinary collaborations. She's working on a national University of Adelaide-led study on opioids and their potential to improving the exercise capacity of COPD patients within pulmonary rehabilitation programs, and with Laureate Professor Rob Sanson-Fisher from Public Health on a grant for a COPD self-management intervention using online tools.

Observing 'limited evidence' for COPD treatment guidelines and recommendations for the management of comorbidity, McDonald is also supervising a PhD student to better understand the disease and its comorbidities.

'So we're looking at measurement tools, comorbidity mechanisms, how they relate with each other and their impact on outcomes.'

'This will help us develop novel approaches to comorbidity management in COPD.'

Juggling many projects at once, McDonald and her colleagues are developing a new research area with another PhD student. This time around, the team is exploring sedentary behaviours in people with severe asthma and bronchiectasis.

McDonald is in the process of recruiting patients for the study, which aims to get snapshots of severe asthma and bronchiectasis by 'objectively measuring' how much sufferers exercise throughout the day and how much of the time they are sedentary. The Australian Pulmonary Rehab Guidelines Committee member will then relate data collected from the individual activity monitors to disease phenotypes and outcomes, such as inflammation and health status.

Recognising the futility of applying general population interventions to people with bronchiectasis and severe asthma, McDonald's team will use all of this information to develop and trial a tailor-made behavioural change intervention.

'We want patients to be more active, but we also need to accept that they're often limited by breathlessness, muscle wasting and other comorbid factors.'

Beyond the here and now

Similarly recognising the futility of only undertaking short-term research in this field, McDonald is leading a longitudinal study of patients with bronchiectasis.

'There are few long-term data of this population and determinants of decline,' she admits.

'So I'm following up patients every year for five years to track their progress.'

More recently, McDonald was part of the team that received a $2.5 million National Health and Medical Research Council grant to establish a Centre of Research Excellence in Severe Asthma. It's part of a collaboration led by Professor Peter Gibson involving national researchers from Brisbane, Sydney, Melbourne, and Perth.

'We will also develop an implementation framework to translate this new knowledge into practice.'