Understanding the molecular basis of disease

Dr Michael Fricker started his academic career at the University of Cambridge, where he studied cell death in brain cells, first as a PhD student and then as a post-doctoral researcher. He’s now using those cell biology techniques to investigate the causes of asthma and chronic obstructive pulmonary disease (COPD) at the University of Newcastle. 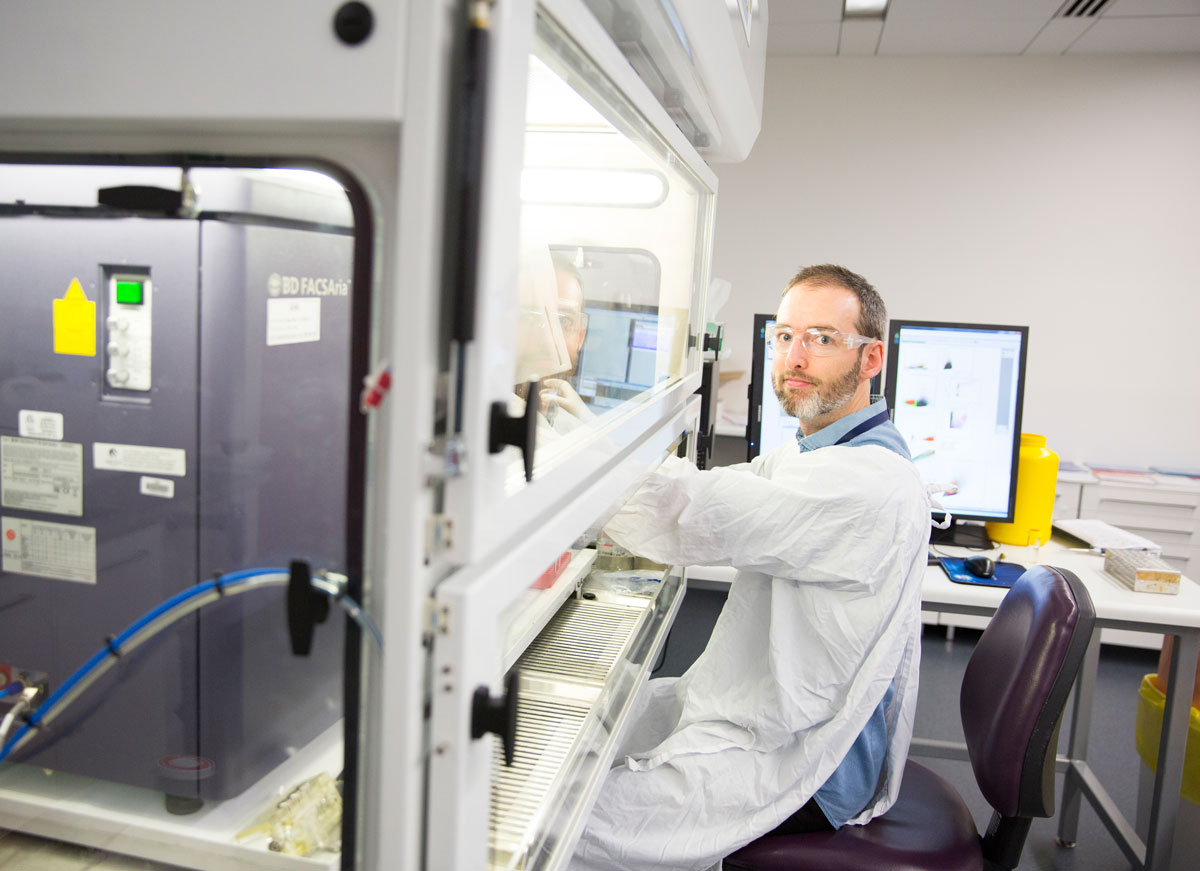 “I would describe myself as a cell biologist – before I moved to the HMRI, most of my work was done in basic sciences, trying to understand the molecular mechanisms by which cells die.”

His research group at Cambridge was the first to identify a novel form of cell death, ‘phagoptosis’.

“A popular idea in cell death research is that cells die and then (and only then) they're eaten by neighbouring cells. We discovered that actually the eating process itself can drive death, so if you block the eating then you can rescue cells in certain situations.”

“This has important implications in medical research. In our bodies, an estimated 70 billion cells die per day. These death pathways are highly regulated as part of the body’s internal homeostasis mechanisms. Disruption of this regulation is manifested in a number of medical conditions – from neurodegeneration to cancer to asthma.”

Michael moved to Newcastle in 2012, where he worked alongside Professor Phil Hansbro at UON’s Centre for Asthma & Respiratory Disease (now PRC for Healthy Lungs).

“It was quite a big change of field for me and a big challenge but I learned a lot."

“I have been able to apply some of my expertise in those basic cellular processes to our research on respiratory disease. So we have projects looking at different types of cell death in COPD – lung structures are destroyed and certain types of cell death can contribute to that as well as the ongoing inflammation in the lungs.”

Since 2016, Michael has been working with Professor Peter Gibson at the university’s Centre of Excellence for Severe Asthma, alongside translational health researchers and lab-based scientists alike.

“We’re working at both ends of the spectrum. I’m looking for biomarkers and we’re also looking at ways to translate this medical research into clinical practice.”

Asthma is an umbrella term which encompasses a number of subtypes of the disease. Severe asthma patients display the most extreme clinical symptoms, which are typically resistant to conventional drug treatments.

“We’re specifically targeting severe asthma because that's the area where there's the most unmet clinical need.”

There are a number of emerging asthma drugs on the market, and a number of them which have shown promise in clinical trials target ‘type 2 inflammation’. While approximately 50% of asthma patients exhibit this type of inflammation and are therefore likely to benefit from these drugs, there is a lot less known about the inflammatory processes observed in the rest of the asthmatic population.

“I'm aiming to understand some of those processes, develop biomarkers that report them and hopefully help to uncover new therapeutic targets. So what we're trying to do is develop ways of better managing the disease and better ways of using these new treatments that are coming through.”

“Conventional sputum analysis is performed using a microscope based cell count – so the only information that goes into that process is whatever is distinguishable by eye.”

Michael is currently researching ways to improve this subtyping process, with the ultimate goal of delivering personalised medicine to severe asthma patients.

“While we might count a few hundred cells under a microscope, if we were to run that same sample on a flow cytometer, we might count a couple of million cells. That way, we can look at rarer cells, like mast cells - which are linked to allergic inflammation.”

Flow cytometers can rapidly identify cells based on their size and density. Researchers can also label different cell types by using targeted stains which correspond to specific cell markers.

“It hasn't been used very much in clinical studies; in part because the technology is relatively new and in part because sputum is sticky stuff, which creates a further technical challenge. While it isn't suitable for mass clinical use at the moment, it's an evolving technology and we are generating some very promising results.”

Another application for flow cytometry in this context is the isolation of specific cells from patient samples. These cells can then be closely studied in the lab.

By investigating disease subtypes at the molecular level, Michael is hoping to identify specific biomarkers to guide treatment pathways.

“My overriding passion is the study of basic cellular processes and life at that cellular and molecular level. We can learn a lot about these basic processes through studying disease as well - and the two are fully interconnected.”