From deciphering communication between dolphins, to isolating the mechanisms of schizophrenia, Professor Ulrich (Ulli) Schall investigates cerebral activity to better understand the riddles of the brain. 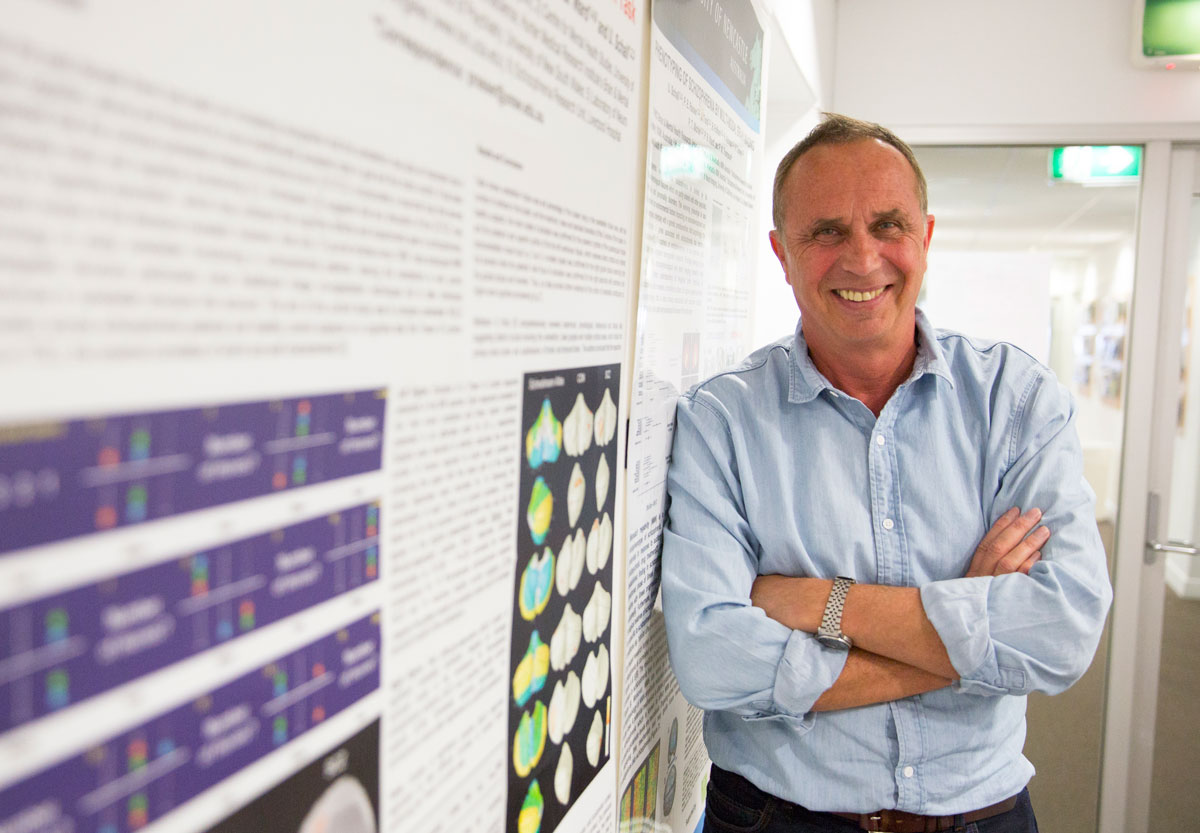 The introduction of the electroencephalogram (EEG) in 1924 allowed scientists to amplify and record electrical reactions of the brain to external stimuli, without intrusion or risk, for the first time.

Soon after came the development of the event related potential (ERP), allowing for the establishment of parameters for normal brain function using EEG data averages.

It is in this area of cognitive neuroscience research - understanding the relationship between clinical and cognitive signs and symptoms of neuropsychiatric disorders with structural and functional brain imaging measures - that Ulli is expert.

“My focus is understanding what's going on in the brain of people with mental illness, particularly schizophrenia,” he says.

“And then there’s EEGs on dolphins.”

Whilst exploring the causes of schizophrenia, and its treatment in a clinical setting, Ulli is looking at the use of ERPs as extra clues in the challenge of correct diagnoses.

Focusing on a simple paradigm to track brain activity via EEG, Ulli has people listen to a series of beeps, usually whilst engaged in another activity.

“Our brain picks up the difference, although we might not been noticing anything, so it should be happening pre-attentive,” he explains.

“It has become clear that the brains of people with schizophrenia are not registering this pre-attentive marker.”

“In contrast, it appears that people with ASD experience an overflow of stimulation, and they have a larger mismatch negativity.”

“And young people with ADHD usually have a problem with attentive disturbances.”

“So the brain will register the difference in the paradigm but may have difficulty with response and reaction time.”

Through both his research and his role as a Senior Staff Specialist with Hunter New England Health’s Child & Adolescent Mental Health Service, Ulli is active in the early detection and management of mental illness in young people.

He also works with early intervention specialists in the private sector.

“I see a lot of young people with ADHD and ASD, but also first episodes of psychosis,” Ulli says.

“Very often schizophrenia comes out of the blue and has devastating implications.”

“Because this disorder starts with adolescence in most cases, we need to identify people at risk as early as possible.”

Ulli and his collaborators around the globe are attacking this need with gusto, looking across the spectrum from genetics, to foetal programming, to life events for clues as to what triggers schizophrenia.

Immune processes as a factor

Data from the Newcastle-run Australian Schizophrenia Research Bank (ASRB) was pooled into a sample of 150,000 people, of whom almost 37,000 had been diagnosed with schizophrenia.

This enabled researchers to detect 108 loci where the DNA sequence for schizophrenia patients differed from those in people without the disease.

Many of the variants discovered are involved in neurotransmission, highlighting a potential therapeutic avenue, while associations were also found in genes that function in immune processes.

Findings of a biological association between synaptic transmission and inflammation have provided a new pathway for investigation.

Ulli has been involved in several investigations of this link between immune system and schizophrenia.

He is currently working on a team, lead by Professor Deb Hodgson, studying the possible link between maternal immune responses and premature cannabis consumption in the development of schizophrenia.

Ulli’s extensive experience, commitment, and international reputation are reflected in his achievements and appointments.

He is the Chair Schizophrenia Research (Cognitive Neuroscience) at UON’s School of Medicine and Public Health in the Faculty of Health, and a senior affiliate of the UON’s Priority Research Centre – Brain & Mental Health.

To gain his PhD in Psychology in Germany, Ulli looked at auditory and somatosensory sensitivity in pigeons aiming to understand higher brain function in an animal without a cerebral cortex.

By 2000, he had completed studies to obtain both a Doctor of Medicine and Doctor of Science.

Postdoctoral research at the University of New South Wales, and clinical experience at the Prince of Wales Hospital, Sydney completed his training.

“I was very lucky to become involved with the group of researchers who discovered pre-attentive deficits in schizophrenia, and am still collaborating with them now,” Ulli says.

“There have been thousands of publications around this topic. As we developed a story around the discovery, it has become much more complex.”

Also on the radar

So what of the dolphins?

Ulli is collaborating with German marine biologists using EEG measurements of their response to sound stimuli to attempt to understand their communication.

The collaborators are also looking to better understand sonar systems, to design interventions that prevent dolphins and whales from being trapped in sea nets.