Professor Billie Bonevski is a National Health and Medical Research Council (NHMRC) Career Development Fellow, Behavioural Scientist and University of Newcastle researcher whose smoking cessation programs are being implemented by Cancer Councils across the nation. 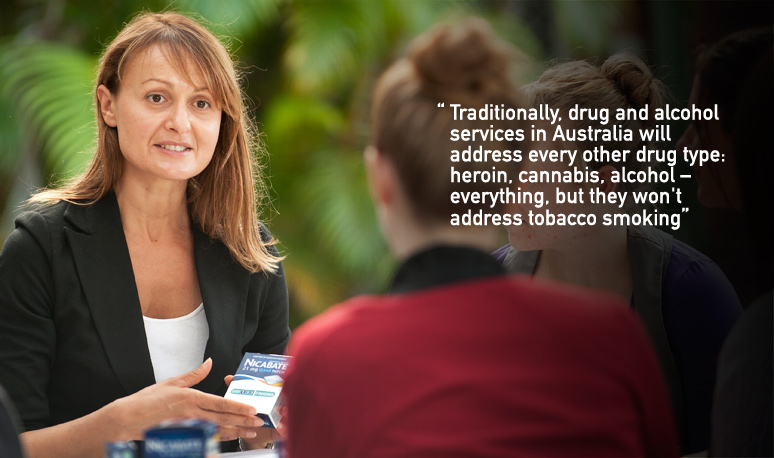 As the leader of the NHMRC-funded Tackling Nicotine Together (TNT) program, which aims to reorientate drug and alcohol treatment services, Professor Billie Bonevski aspires to ensure support is provided to help people quit smoking.

"Traditionally, drug and alcohol services in Australia will address every other drug type: heroin, cannabis, alcohol – everything, but they won't address tobacco smoking," Billie asserts.

There is a multitude of reasons as to why it has been this way, but the fact remains, services adapting to promote behaviour change is vital.

"The problem has been that most people who receive treatment for their addictions will actually die from tobacco-related disease rather than those other addictions they have," explains Billie.

While fifteen per cent of the Australian population smokes, this rate drastically increases for people attending drug and alcohol centres, including centres which are within the TNT program.

"Between 70 and 100 percent of centre clients' smoke," Billie affirms.

The TNT study is the first in Australia to increase tobacco dependence treatment to patients.  A collaborative endeavour between the University of Newcastle, the Cancer Council NSW, the National Drug and Alcohol Research Centre (UNSW), and the Network of Alcohol and Other Drug Agencies, it is a staff-centric project with more than 30 centres nationally.

The project focuses on building the capacity of treatment centres, to insure that these centres can provide their clients with the support needed to quit smoking.  Centre staff are trained in treating tobacco dependency, have access to free nicotine replacement stock to give to clients, and are linked to Quitline for more involved treatment.

For the past five years, Billie's work has focused on priority groups, such as those who may be socio-economically disadvantaged, or people with comorbidities like cancer or chronic illness. Health initiatives, up until now, have largely ignored these groups, choosing instead to target the broader Australian public with health education.

"Generally speaking, such measures have been effective, but there are pockets of society who have missed the message or experience a lack of services to help them deal with their unique challenges," Billie states.

She feels that targeting groups has been a significant advance in the field, particularly as one of her recent studies shows that one in four Australians will experience some sort of comorbidity or disadvantage at any given time.

With a Bachelor of Arts and First Class Honours in Psychology (and the departmental prize for best applied thesis) from the University of Newcastle, Billie began work as a research assistant to Rob Sanson-Fisher, then Head of Behavioural Science in the Faculty of Medicine. Flourishing in the role she began her PhD in Behavioural Science, developing, as part of her thesis, a desktop computer program for GPs.  This program would remind doctors to carry out preventative activities in each patient consultation, such as suggesting a patient quit smoking, or reminding women of the need of a pap smear.

"The program was found to increase rates of preventative care," Billie remarks.

"Which I still find really nice!"

Despite undertaking a valuable year at the University of Oxford in the UK in 1997, for a World Health Organisation General Practice research fellowship, Billie was drawn back home.  Bolstered by the knowledge that the University of Newcastle is a national leader in public health research, prompted Billie not only to return, but to stay.  As she says now "Why would you move?"

Billie's background in psychology has proved to be highly applicable to her present studies.  Her primary focus is on improving people's health behaviour by developing programs so they can optimise their own health through modified behaviours.

"Psychology provides the tools and the strategies for behaviour change," she confirms.

"Whether it be goal-setting, cognitive behaviour therapy or other tactics to arm people with the means to change."

Encouraging smokers to smoke less, drinkers to drink less and getting people to wear sunscreen are just some examples.

"It's about trying to get people on the path to health again through preventative actions and health-behaviour change," Billie says.

While Billie's work is particular to the Australian psychosocial situation, it has significance for the world population. Globally, health equity is a pertinent issue recognised by researchers as an area in dire need of addressing.

"My research is one piece of the jigsaw puzzle to ending health inequities."

"Nonetheless, as the local health community is increasingly recognising, it's a key one."

Six months after the TNT project, data will be collected to determine the effectiveness of system change intervention for smoking in drug and alcohol centres across Australia.  Questions will be asked as to whether clients felt they received more treatment from centre staff to tackle tobacco dependency; if they felt it helped them quit, and the level of smoking cessation.

The potential of this valuable data is that the government can use it to inform public health policy, hence preventing the burden of illness caused by tobacco.

Billie's previous research with the Cancer Council New South Wales 'Tackling Tobacco Program' has attracted the interest of Cancer Councils in Victoria, Queensland and Western Australia. To translate the NSW-based research widely, a Tackling Tobacco National Implementation Group has been formed to focus on vulnerable people's use of the substance.  This bodes well for the TNT project.

Billie, a University of Newcastle Gladys M Brawn Career Development Fellow, is frequently invited as a keynote speaker in national smoking cessation and skin cancer forums, and often honoured in being able to set the agenda.  She's able to present data based on the research being undertaken at the University of Newcastle, on why focusing on tobacco research in long-neglected priority groups is important.

"If you're refocusing the national agenda on the sort of research that should actually be occurring, then you're training up the future that's going to sustain what you're doing now," Billie says.

Her Newcastle team's research work is leading the nation, and is evidently able to command the attention of the tobacco control community.  This, together with her role as a keynote speaker and her success in attracting valuable funding from the NHMRC, is a great incentive and inspiration for Billie's five current PhD students, who are able to work on her important projects.