Studying the science of nutrition

Molecular nutritionist Dr Emma Beckett is exploring the genetic secrets behind microbiomes and whether you really are what you eat. 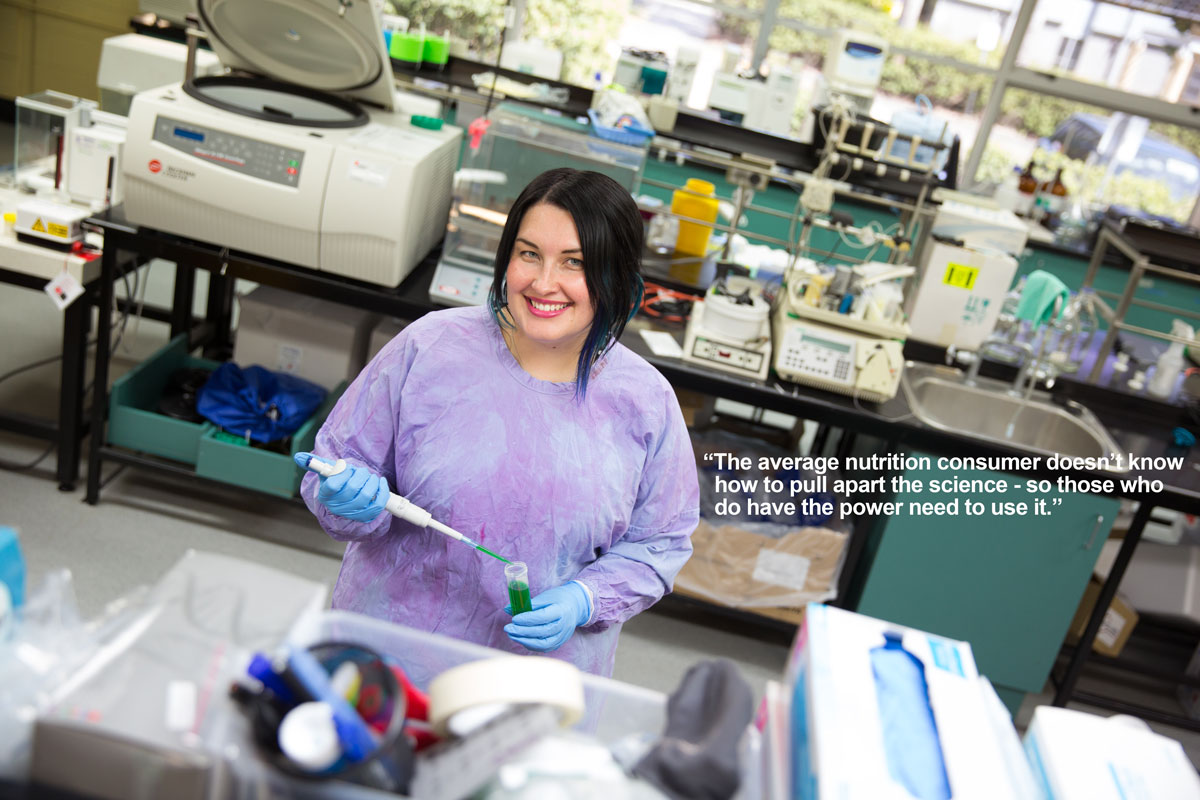 “A lot of diseases carry a certain dietary risk: but we don’t always know how the food we eat actually causes the risk in the body. I’m interested in working out what’s happening on a molecular level,” Emma explains. Molecular nutrition explores the bi-directional interaction of nutrients with molecules in the body and helps us understand fundamental questions about our health.

This study of nutrients at a cellular level helps to assess how different nutrients interact with molecules in the body, including the bacteria that live in us, such as the gastrointestinal microbiome. Emma is interested in unraveling how our genes, diet and microbiome interact to predispose us to health or disease. “We all eat food, we all have genes, and we all have a microbiome. But it’s a matter of figuring out how our different unique combinations interact to mean some of us stay healthy while others become unwell” explains Emma. “We can do this by studying cohorts of people, measuring what they eat, what versions of genes they have, and which microbes live in their guts. We compare the different profile to the outcomes and make inferences about disease risk. We can also use cell culture to model the gastrointestinal environment and take control of the interactions to uncover the mechanisms.”

Emma's undergraduate study was in biomedical science with an honours year in immunology and microbiology, followed by four years working in asthma and allergy research at UON. However, for her PhD, Emma wished to explore a new topic that really inspired her: diet and epigenetics. “I’m a twin, so I was already thinking that one of the only things different about me and my twin sister is diet. So I decided that I wanted to do a project exploring that and found the nutrition group here on the Central Coast to explore my project.”

A 2016 NHMRC Early Career Fellowship came at the perfect time for expanding her career independently of her PhD supervisors. “I can now recruit students and look to explore the complex interactions between diet, the microbiome, genetics and epigenetics – with the aim of leading to a better understanding of our risk for, and the effective treatment of, diet-related disease.”

Emma’s current research brings her previous work experience together with her undergraduate and postgraduate by assessing gene-nutrient interactions. “I’m interested in how the genes you have can influence how you taste, process or detect food in your body. But also about how the food you eat changes the way your genes are expressed.”

Spreading the good news about science

Along with her research, Emma is passionate about science communications and outreach. She’s a committee member of Pint of Science Australia and presented at the sold out premiere event in Newcastle in May 2016 – one of many researchers sharing science in pubs around the globe.  Emma is also sought after as a media commentator and in October 2016 featured on ABC’s Ockham’s Razor busting the myths of superfoods.

“It’s not just that I have a passion for science,” Emma explains. “I’m very passionate about appropriate use and communication of science. I get quite distressed when science gets twisted by marketing, or when people use bad science to make money or take money off people. And nutrition is an area where there’s a lot of misinformation, and a lot of twisting of information, and a lot of money to be made. The whole ‘dieting’ industry is a huge industry where a lot of money is made.”

Emma is working to bust the myths around nutrition and to teach people how to critique the information they’re given about our diets. “Nutrition’s really hard because everyone eats food, and so everyone’s a stakeholder,” Emma says. “This is great, because people are invested, but it also means that everyone has an opinion and that makes it difficult because then people think ‘well, my neighbour lost weight on the paleo diet, so obviously the paleo diet’s healthy’. But weight loss is only one part of health – and when it comes to the paelo diet all I’ll say is that cavemen didn’t have to worry about colon cancer because they died at 30…”

“It’s really hard to break through the anecdotal basis for people’s beliefs in diets and I think a lot of that involves trying to help people critique the science that’s delivered to them,” Emma says.

“The average nutrition consumer doesn’t know how to pull apart the science – so those who do have the power need to use it.”

The bulk of Emma’s sci-comms work focusses on how the science of nutrition is interpreted. “You’ll see a news item that says ‘New study shows that butter is better than margarine’ but if you actually read the study you’ll see that is not what it says. The definition of what is better, and you’ve got to remember that it’s all in the context of the overall diet, who the people are, and what else they’re eating, you can’t blame the media for wanting a good story, and you can’t blame the scientists who put out the media release but you’ve got to be able to give people the tools to understand the science and cut through the marketing and the headline.”

With the title of Dr very fresh on Emma’s profile, it’s refreshing to hear that she had a very positive time as a Higher Degree Research candidate. “I had the best PhD experience,” Emma enthuses. “I have no complaints about my PhD experience at all and managed to complete it in four years and 10 days.”

While completing her PhD Emma took the opportunity to apply for International experiences that enabled her to learn from the world’s greatest minds. “I apply for everything,” Emma says with a smile.

A highlight of Emma’s career so far is her selection for the visiting fellowship at the National Institutes of Health in the USA. “It was on the Adam Berry Memorial Scholarship. Each year the Australian Academy of Science sends one PhD student to the US to spend three months working at the NIH to gain collaborative experience,” Emma says.

This award had poignant significance for Emma as Adam was a young Australian scientist working at the NIH who died in a car accident while he was there so his parents established the scholarship in his honour. Emma found out she’d won the award shortly after losing her brother in a car accident so it remains a big source of inspiration and a tribute to her tenacity. It also compelled her to aim high when applying for experiences.

Emma was selected from a very competitive field to meet with Nobel Laureates at both the Eighth HOPE meeting in Tokyo and in the 65th Meeting with Nobel Laureates in Lindau, Germany. “The imposter syndrome is big in science, so being able to talk one-on-one with Nobel-winning scientists and finding out that they’ve all been there before is very levelling. It was great as so many of them were talking about their failures. For example. Martin Chalfie, one of the world’s leading scientists, quit science because his undergraduate experiment failed and became a janitor. After being a janitor for a few years he went back to science and discovered that he wasn’t bad at science – he just had a bad project. But it’s also about luck, a lot were in the right place at the right time to hit on the right project – that reminds you that it’s not all in your hands and it’s okay to fail. New opportunities will come to you.”

Not only does Emma put her hand up for opportunities, she actively seeks them and doesn’t self-censor herself on opportunities. Applying for everything not only gives you practice at applying – it gives you practice at failing Emma notes. “People really underrate how much failure is a part of being a researcher,” Emma explains. “If we knew an experiment was going to work, it wouldn’t be called an experiment. Just because you don’t prove your hypothesis doesn’t mean it was flawed or you failed. You can’t take it personally, you just need to refine your hypothesis and move on.”