Professor Amanda Baker is a National Health and Medical Research Council Senior Research Fellow at the University of Newcastle. An award winning innovator, she specializes in the treatment of co-existing mental health and substance use problems. 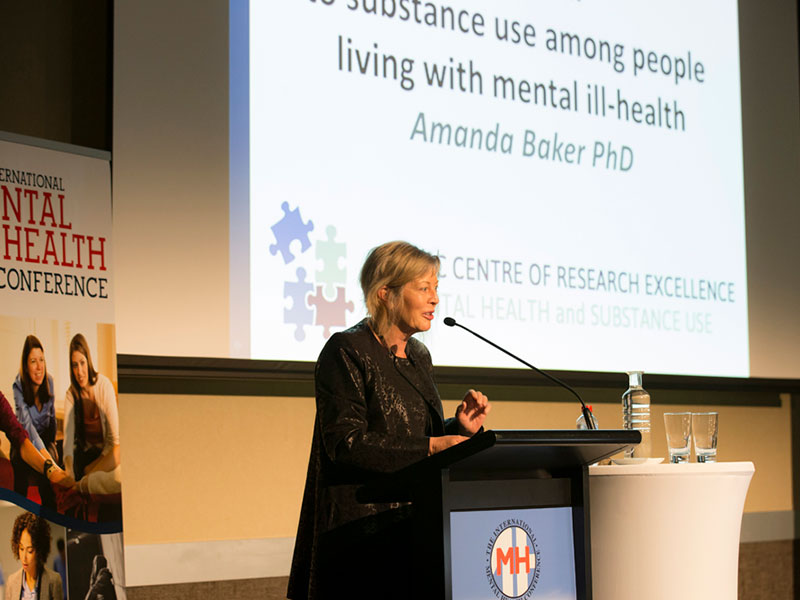 Early in her career as a clinical psychologist, Professor Baker identified a lack of integration between mental health supports, and drug and alcohol treatments as a major barrier to behaviour change.

"What drives me are the dualities in the system between mental health and drug and alcohol," Amanda explains.

People often have more than one problem, and mental health and drug and alcohol use go hand in hand.

Over one hundred and fifty publications later - including five national amphetamine treatment clinician guidelines and eight treatment manuals for comorbidity - Amanda and her team have made significant progress toward the recognition of the need to integrate the treatment of co-existing issues.

By the time Amanda graduated in the early 1980s, the push to de-institutionalise mental health in Australia had begun in earnest. Research and practice from around the world showed that mental health patients, who had previously been institutionalised, had better health outcomes when transitioned back into the community.

A stint practicing in community health in Manchester, the United Kingdom, gave Amanda a new perspective on how psychologists could successfully aid this transition. During this time, Amanda experienced first-hand the positive outcomes of a system where practice and research were highly integrated, and was eager to facilitate a change in this direction back home.

Returning to Australia three years later, Amanda took up a position at the National Drug and Alcohol Research Centre, where she completed her PhD on reducing HIV risk in injecting drug users, before working in the drug and alcohol facility at Westmead Hospital, Sydney.

In 1995 Amanda was appointed to head up a graduate course in Drug and Alcohol Studies for clinicians at the University of Newcastle. Armed with experience in the clinical and research spheres of both mental health, and drugs and alcohol, Amanda's input into the Faculty of Health and Medicine has been invaluable. Her attention shifted from teaching and research to research in 2003, where has been continuously funded by NHRMC fellowships ever since. Known as a generous mentor and supporter of early career researchers, Amanda was appointed Deputy Head of the School of Medicine and Public Health (Research) in 2010 for a three year term.

A consistent area of focus in Amanda's research has been the use of methamphetamines by people with mental health problems. Leading a Commonwealth funded trial in the early 2000s, Amanda found counselling to have favourable outcomes for methamphetamine users. The treatment framework was disseminated nationally, but unfortunately, the model was not sustained.

Amanda points to several factors including poly-drug use, presenting behaviours such as paranoia or violence, and sector worker turnover as barriers to methamphetamine users accessing drug and alcohol services.

"Methamphetamine is the drug that makes you confront that overlap between mental health and substance use," she says.

"It really draws out the psychotic symptomatology and edginess in people."

"Users can be angry or violent, and workers need training to be confident on how to proceed from there."

As immediate past president of the Australasian Professional Society for Alcohol and other Drugs (APSAD) Amanda represented this peak body in consultations with the Federal Government's National Ice Taskforce. Called upon to help inform the community response to ice use as a major public health issue in Australia, she presented at the National Methamphetamine Symposium in early May 2015.

"In the last ten years or so I have become very interested in tobacco, the drug that everyone forgets."

"Because it is legal, people don't understand that it can create so much harm," she adds.

Amanda has been an advisor during the transition of forensic hospitals to smoke-free facilities, and is currently working on a phone delivered smoking cessation program for people with mental health problems in partnership with Quitline Victoria.

"I'm very passionate about trying to help people with mental health problems give up smoking," she declares.

"They die 20 years earlier than people in the general community from tobacco related causes."

The trial, led by Associate Professor Billie Bonevski, is attempting to decrease the healing time and amputation risk of participants by helping them quit smoking.

WHERE TO FROM HERE

When asked about her future, Amanda conveys her enthusiasm for the Quitline telephone delivered smoking cessation program. She sees this as her direct future, evaluating phone interventions in real life delivery.

"I think telephone interventions are where I can make an impact," she avows.

"But we have proved that phone intervention, which everyone loved, was simpler, briefer and just as effective."

Amanda also speaks eagerly about a related project she is undertaking with Doctor Peter Kelly from the University of Wollongong.  This project trains peer workers to deliver healthy living interventions with a focus on diet and activity, to people with mental health problems, again via telephone.

Although it may seem incongruous for Amanda to be focusing on diet and activity she points out that changing dietary intake (like levels of fruit and vegetables) and reducing TV watching may impact positively on the other behaviours that affect cardio-vascular health – smoking, alcohol, and snacking on high fat foods.

"They are all addictive behaviours," she explains.

"In today's society, you can buy so much food, so much packaged food. Forty years ago it wasn't available. Food really is the new tobacco."