Australia's two million sufferers of airway disease can breathe easier thanks to the work of the University's groundbreaking respiratory researchers. 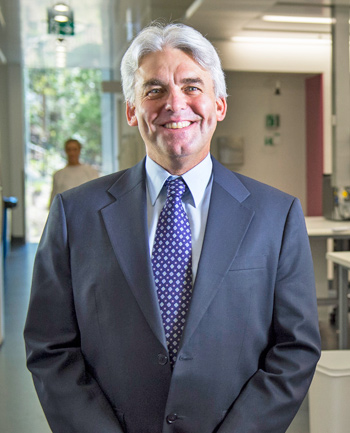 From the bench to the bedside, the University of Newcastle's Centre for Asthma and Respiratory Diseases is leading the way in the understanding, management and treatment of chronic airway conditions.

The work of the centre is internationally recognised, having contributed significantly to advancing both medical practice and policy through its discoveries.

Its studies are regularly published in the most prestigious journals and it is a major training hub for respiratory medicine and immunology, attracting gifted PhD students and postdoctoral researchers from around the world to work and study in Newcastle.

Foster and Gibson's teams work under the umbrella of the Hunter Medical Research Institute, a partnership between the University of Newcastle and Hunter New England Health. They also collaborate with research groups in Sydney, Newcastle, Melbourne and Perth as part of the Cooperative Research Centre for Asthma and Airways, a $55 million government-backed program.

Gibson is working at the clinical interface, using his role as a respiratory physician at the John Hunter Hospital in Newcastle to inform his research into treatments and management strategies for asthma and airway disease.

Foster, the University's Chair in Immunology, investigates the molecular and cellular mechanisms of disease in the laboratory. Both have a keen interest in unravelling the critical role of inflammation in asthma and other respiratory conditions.

"We are constantly on the lookout for better treatments but with a disease like asthma, management is also important," Gibson says.

"For some people, just understanding what is happening to them is enough to make a big difference to their condition and quality of life."

Gibson's clinically based team is involved in research projects with significant implications for future treatment and management of airway disease (see below).

Novel discoveries have also been made by the centre's laboratory-based researchers.  These discoveries have enhanced the understanding of processes associated with the development and progression of respiratory diseases.

Centre scientists study the cellular and molecular functions of the diseases on animal models then collaborate with the clinical researchers to validate their findings using human tissue.

Foster says the centre is at the forefront of interpreting how inflammation, which underpins airway disease, occurs and of developing new anti-inflammatory treatments.

A major breakthrough was their research into how microRNA molecules, which regulate protein production in human cells, can cause inflammation in the body that can manifest as asthma. Working out how to control that inflammatory response has provided scientists with a therapeutic target, which could lead to new treatments.

"Steroids are the conventional treatment, but they can have side effects and while they dampen response, they do not cure the disease," Foster explains.

"Also, not everyone is responsive to steroids and within that non-responsive group there is a lot of morbidity."

Foster says his team has made a significant contribution to the understanding of the mechanisms of steroid-resistant inflammatory pathways that may be relevant to asthma, bringing them closer to the goal of developing alternative treatments. Other critical areas of laboratory research focus on allergies, viruses and infection as triggers for asthma.

While the two arms of research within the centre are undertaken by different teams, Foster says it is the critical mass that contributes to its overall success.

"What we have is diversity and common interest," he says. "There are similar centres of excellence around the world but they primarily do either clinical-based research or basic immunology. The way the two are integrated here is what makes us unique and underpins our success."

"People are willing to collaborate," Gibson agrees, "and it is only by linking patient-focused research with laboratory discoveries and evidence-based medicine that we are able to get these broad insights into disease."

These specific projects involve better management of asthma in pregnancy, the development of a blood test to diagnose the disease and the treatment of non-eosinophilic asthma with macrolide antibiotics.

The team's study into asthma in pregnancy was prompted by the reluctance of women to use treatments during gestation, even though severe asthmatic episodes can be harmful to both mother and child.

As part of this project, researchers measured nitric oxide, which is produced by inflamed airways, in the pregnant patient's exhaled breath. They were then able to adjust the amount of medication according to the severity of the inflammation.

In many cases this reduced the amount of steroid that needed to be administered, which made women more likely to take their medication as they were less apprehensive about the treatment and its effects on their unborn child.

Another benefit was that the frequency of asthma exacerbations, or episodes, decreased because the condition was being better managed.

In another study, published this year in the American Journal of Respiratory and Critical Care Medicine, the team used the emerging scientific field of proteomics (the study of proteins) to identify four blood-based biomarkers that when analysed together can distinguish between asthma and chronic obstructive pulmonary disease.

The two diseases share common symptoms, so are difficult to distinguish, but require different therapeutic approaches.

This finding could lead to the development of the first blood test for asthma, which would be a major diagnostic breakthrough.

The third project is the AMAZES study (Asthma and Macrolides: Azithromycin Efficacy and Safety). It will trial an alternative treatment, known as a macrolide antibiotic, for asthma that is not responsive to conventional steroid medication.

Steroids treat a particular cell, called an eosinophil, which is thought to provoke inflammation when present in increased levels. But research has established that up to half of adults with asthma symptoms have normal levels of eosinophils and respond poorly to conventional treatment.

The five-year, $2.9 million study is trialling the antibiotic on approximately 400 asthmatics in four cities and is the biggest study into non-eosinophilic asthma in the world.  It is funded by the National Health and Medical Research Council.