An integrated approach to cancer treatment

Associate Professor Jarad Martin is a Radiation Oncologist with a dual focus on research and clinical practice. 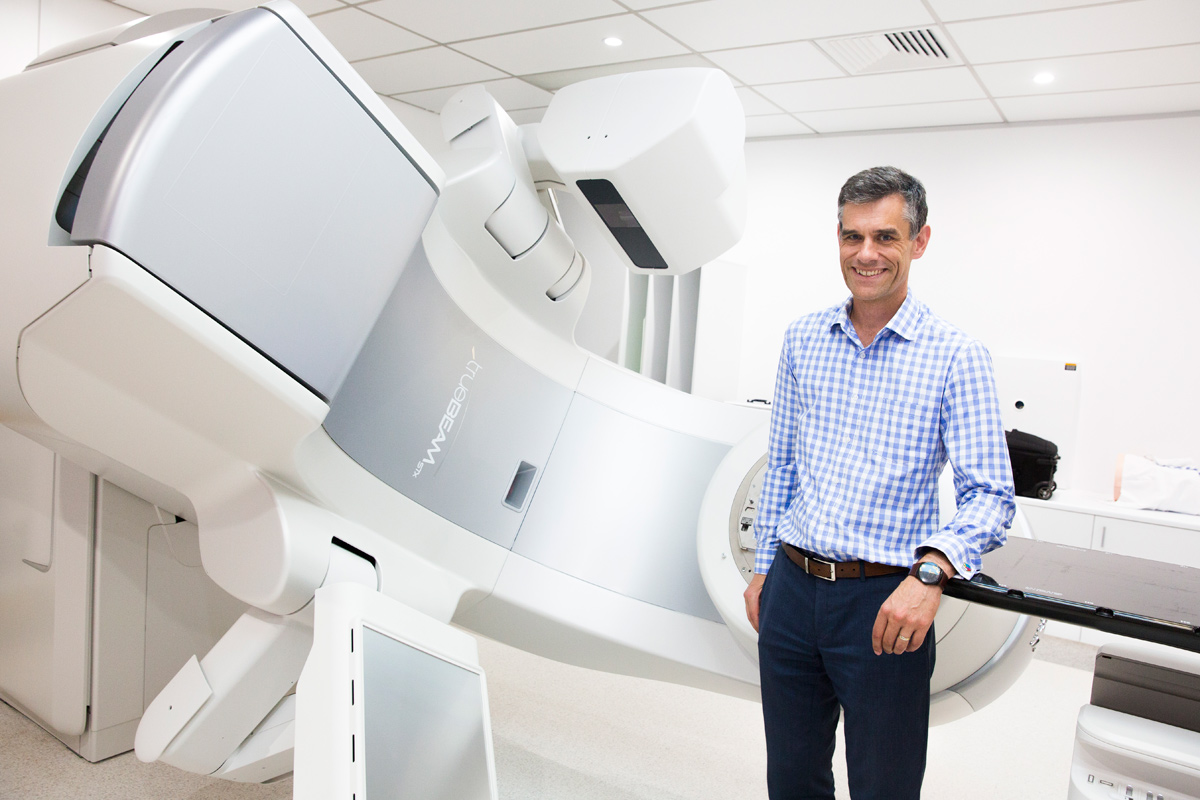 Radiation oncologists apply radiation therapy to a broad range of conditions and Jarad sub-specialise in anatomic sites such as genito-urinary (prostate, bladders, penis, and urinary), and gastrointestinal (from the oesophagus via the pancreas and liver, and the bowel). While this work is very specialised, Jarad says that there are a range of conditions involved in the treatment which allows for opportunities and challenges for practitioners and researchers.

“When it comes to treating bowel cancer or colorectal cancer we need to work with medical oncologists, colorectal surgeons, radiologists, physios and other professionals to get the right outcomes for the patient,” Jarad says.

Working closely with other specialists to achieve optimal patient outcome, Jarad says that it’s important to consider a whole suite of research approaches, including retrospective reviews, technical sub-studies and behavioural change. “We’ve been working with Laureate Professor Rob Sanson-Fisher’s group to help clinicians integrate research findings into their everyday practice, and we really do try to collaborate as much as we can with the other areas of excellence in this town.”

“We interact with dietitians, physios and other allied health professionals,” Jarad adds. “A lot of these groups have strong community bases, so there are many opportunities to engage with people through speaking at meetings. It’s a great way to interact at the ‘coal-face’ with people.”

A long road to Newcastle

The decision to specialize as a Radiation Oncologist has seen Jarad forge a career in the Hunter after travelling the world studying and specialising. After graduating as a medical practitioner in New Zealand, Jarad spent time in England and then Melbourne training at Australia’s largest cancer hospital.  This gave Jarad insight into the challenges that researchers face when integrating practice.  He then did some advanced training Toronto, Canada, prior to spending nearly six years in Queensland working in a regional setting and in private clinical practice. This range of work settings places Jarad well to have formed numerous networks, and gained valuable perspective on the diversity of issues which arise in different environments.

His move to Newcastle has placed Jarad in an epicentre of cancer research. The Hunter region has a strong network of cancer researchers, with a diverse range of specialists collaborating to achieve a positive outcome for this pernicious disease. As the leading cause of death in Australia, there is a justifiable focus on diagnosis, treatment and options for cure for cancer with researchers drawn to solving one of the world’s greatest health problems.

Jarad is also involved in TROG Cancer Research group, which is based in Newcastle, and working across Australia and New Zealand to improve the way that radiotherapy is delivered to cancer patients. “With the TROG group we have almost 30 years of history and are the epicentre for a lot of research and practice. We’re also integrated with a range of other groups involved in research into different forms of cancer.”

However, Jarad’s quick to point out that while the Hunter is a hub for specialists in the field, collaborating further afield is not only desirable, it’s essential. “It’s a little bit challenging, but because a lot of the networks are dispersed it means that you could end up collaborating with someone from Canada just easily as you would with someone from down the corridor.”

The challenges of juggling clinical work and research isn’t lost on Jarad who acknowledges that a heavy workload just comes with the territory. “It would be just about impossible to be a really relevant clinical researcher unless you’re a relatively busy clinician – because then you’re aware of what the pertinent questions are and what’s really relevant,” Jarad states.

“With research you’ve got to be pretty clear-eyed about why you’re getting into it,” Jarad explains. “It’s a way of keeping your practice connected with an always changing standard of care, as well as offering your patients access to novel approaches.”

Jarad’s early interest in maths and physics has stood him in a positive stead for this career. “On a day-to-day basis we’re really creating virtual patients and using super-computers to model the way  photon interact within them and coming up with all sorts of ways to predict toxicity and effectiveness,” he explains. “Unless you have a fairly deep understanding of the mathematics behind the practice you’re potentially going to end up an uninformed end user fairly quickly.”

Radiation therapy is complex because you’re treating a moving target, using something invisible that doesn’t leave a footprint, and that’s why quality assurance has become a really big part of the speciality. Jarad is working with a team led by Professor Peter Greer on a new system called ‘Watchdog’ which aims to verify that the patient is receiving the correct dose during radiation therapy treatment.

“You could describe it as a practical way of doing quality control, but it’s a lot deeper than that in that it tries to confirm that what we predict will happen is actually occurring,” Jarad says. With radiotherapy it’s important to not only identify where a tumour is located, but to look at how it can move, rotate or change shape.

Jarad and his team are also looking at how you can change the amount of radiation given, so that it can make treatment more accessible to patients by giving people larger doses over a shorter time period. Having recently led the Australian arm of a clinical trial with prostate cancer patients, published in the Journal of Clinical Oncology where patients were given shorter treatments, using higher doses of radiation. The study showed that the and 4 week version stacked up very well against the previously standard 8 week approach. “It’s a month’s less treatment for exactly the same cure rates,” Jarad affirms.

Dealing with patients and their families who are facing deeply emotional issues around their health can be taxing, “When you’re dealing with cancer there’s a lot of information that you’re trying to convey,” Jarad explains. “We’re trying to guide people through a fairly difficult time in their life, and that’s our most important role as clinicians in oncology.”

“It’s important to remember that there’s no right or wrong answer when it comes to treatment options, all you can really do is break up the information into bite-sized chunks and then try to figure out what will lead to the best outcome for all. You need to have an open conversation with the patients and come up with a decision that everyone’s comfortable with.”