A breath of fresh air

An accomplished asthma researcher, Professor Jodie Simpson is helping to pioneer a more personalised approach to asthma treatment that promises new relief for many who suffer from the disease. 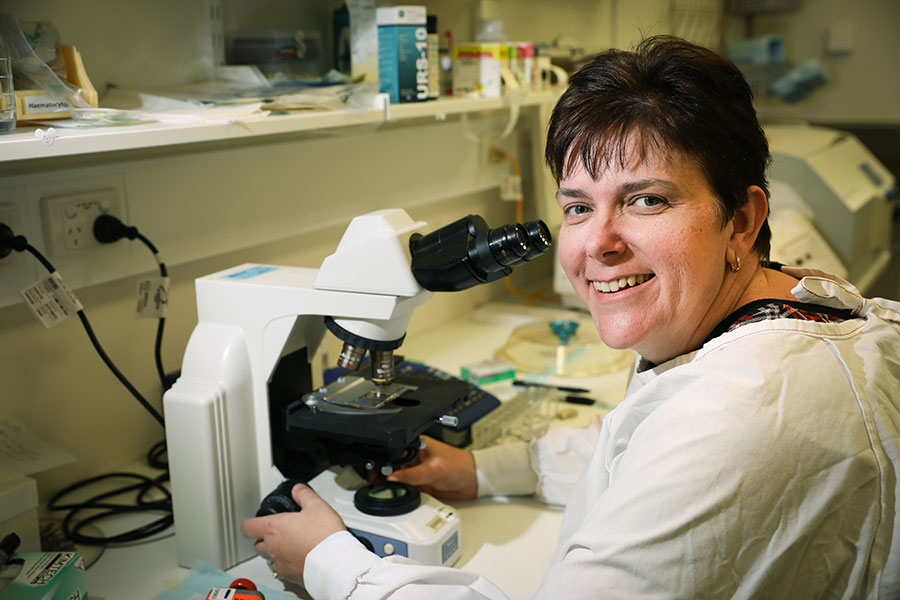 Professor Jodie Simpson’s award-winning research is contributing to more effective, personalised treatment for the one in nine Australians who continue to suffer from asthma across the country.

First, her work led to the breakthrough discovery that asthma has four different subtypes—requiring significantly different treatment approaches. Now, the Deputy Head of School (Medicine and Public Health) is investigating how inflammation becomes out of control in asthma and COPD and the role of airway bacteria.

“My current research looks into understanding how inflammation works in airways,” explains Jodie. “Inflammation is central to causing asthma attacks. I am working to develop a better understanding of airway inflammation and trial new, personalised treatments.”

Personalised treatments promise an array of exciting health benefits for patients, from reducing asthma attacks to enhancing overall quality of life. For healthcare providers, it could also mean improved healthcare spend, patients receive the right therapy to treat their specific type of asthma.

“There are lots of roll-on effects for every aspect of life, particularly if you have asthma yourself, but also for families, carers and the community. With a prevalence of one in nine suffering from asthma, very few of us are untouched by the disease.”

With a background in pure science, Jodie’s first foray into medical research saw her successfully challenge the accepted treatment paradigm for asthma and gain international recognition for her efforts.

At the time, standard asthma treatment included using steroid-based medications to target inflammation in the airways caused by increased levels of eosinophils (a type of white blood cell). However, Jodie was puzzled by the fact that some asthma sufferers had normal levels of eosinophils, which led her to question whether there could be more than one type of the disease.

“I could never understand why it was assumed that all asthma was due to increased eosinophils when only about half of the patients studied we saw had that type of inflammation.”

Encouraged by a small number of scholarly reports advocating a similar theory, Jodie investigated the inflammatory pathways of asthma, counting cells in sputum samples and analysing levels of enzymes and proteins.

Jodie concluded that there were four subtypes of asthma and, significantly, identified a neutrophilic category common among people who did not respond well to conventional, steroid-based treatments. This subtype is characterised by higher levels of a different white blood cell, called the neutrophil.

Jodie's PhD findings were published in the Global Initiative for Asthma guidelines and led to a Newcastle-based randomised control trial, which produced another breakthrough finding, published in 2008 in the American Journal of Critical and Respiratory Care Medicine. The study established that treating people who suffered from non-eosinophilic asthma with macrolide antibiotics successfully reduced their neutrophil levels and resulted in a clinical improvement in their condition.

“It was a small study, but novel at the time, and it showed that identifying the inflammatory phenotype was important for the effective management of asthma.”

That original eight-week, 45-person study evolved into a five-year, 420-person national trial co-led by Jodie and Conjoint Professor Peter Gibson, and funded by the National Health and Medical Research Council. Results from the $2.9 million AMAZES trial (Asthma and Macrolides: the Azithromycin Efficacy and Safety Study), published in international journal The Lancet, found that the macrolide antibiotic Azithromycin reduced severe attacks by 40 per cent and eased general symptoms.

“The focus of the AMAZES study was reducing asthma attacks, and now we are working to understand how this antibiotic can achieve such improvements in asthma attacks”.  .”

In 2018, Jodie received a European Respiratory Society (ERS) Romain Pauwels Award—one of the Society’s most prestigious awards—which recognised her stellar track record in the field of asthma research.

“Inflammation is something we all experience—it’s how your body responds and heals. When a person has chronic inflammation in their airways, it builds up and the cells release important chemicals and proteins to fight infection and heal wounds.

“But if the cells release these chemicals without the proper controls, it can cause damage in the airway. Part of my work involves understanding why this is happening, and another aspect seeks to measure this inflammation accurately to inform treatments.”

“We currently have an effective way of measuring inflammation, but it is technically difficult and not available to all patients and all doctors—we’re working to change that.”

To overcome this hurdle, Jodie is attempting to find biomarkers and look at new ways to measure inflammation, which could eventually allow inflammation measurement to be accessible to all people with airways disease

“Just as we have simple at-home tests for other important disease markers—such as monitoring blood glucose—one day we hope to be able to monitor airway inflammation and help people be able to manage this more easily. But we are not quite there yet.”

While the majority of Jodie’s discoveries take place in the laboratory, she works closely with a team of clinicians, patients and healthcare providers to more fully understand the real-world problems that she is working so tirelessly to solve.

“As a discovery scientist, I study cells and laboratory-based science; but I also interact with clinicians, other scientists and patients. To me, this is crucial. This interaction helps me to understand the work that needs to be done in the laboratory that will hopefully help a person with airways disease.

“I’m a naturally curious person. I like finding answers, and I like making a difference. You learn about the problem from so many different angles, and it is fun to start thinking of ways to answer these questions.”