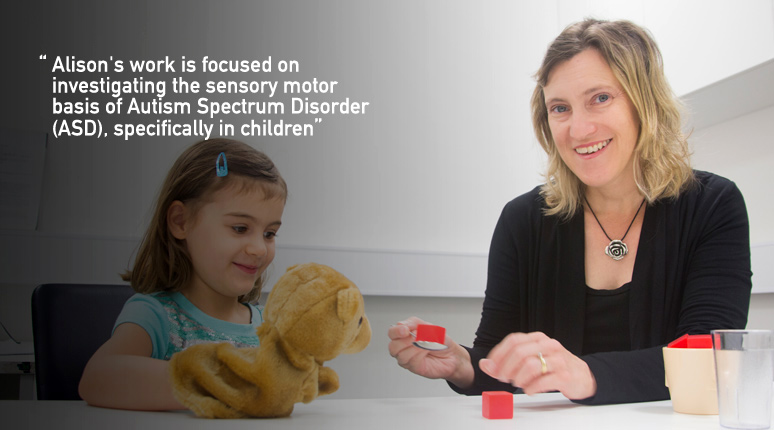 Alison's work is focused on investigating the sensory motor basis of Autism Spectrum Disorder (ASD), specifically in children, and anchored on three simple but essential questions regarding how they react to sensory input.

Are sensory behaviours the same in all children with ASD?

If not, what causes differences?

And how might understanding differences affect the targeting of therapies?

"As occupational therapists we use clinical instincts and input from parents to design interventions in an attempt to grow the capacity of children with ASD to manage their behaviours and emotions in normal daily situations," Alison says.

"However, the research to back up our approaches has been lagging. My research is a contribution toward understanding the nature of these sensory behaviours."

"We think around 60% of children with ASD have these difficulties," Alison states.

"So although not every child with ASD has them, it is the majority, and there can be significant issues."

Alison explains by citing a school fire drill as an unexpected stimulus that may unsettle any child. Most children could, she says, follow instructions and ultimately cope.

Comparatively, the same disruption could have a major negative impact on a child with ASD, for whom responding appropriately could be extremely difficult.

"Somebody might touch a child to redirect them, but the child may misinterpret the type of touch and perceive that quite aggressively, as a hostile touch."

"Their general ability to function in their environment is compromised because they experience these various sensory inputs very differently and then that affects their general behaviour."

Alison's major piece of work to date has been the definition of four distinct sensory subtypes in children with ASD.

This discovery has been replicated in three independent studies.

An algorithm based on a simple questionnaire for parents assigns children to a particular subtype.

There are two factors determining the appropriate subtype. The first is a child's sensory reactivity, or as Alison explains, "the intensity of their response to sensory input."

The second factor is multi-sensory integration, the ability to integrate and combine multiple sensory inputs that are coming at the same time.

"And there is a severity dimension."

"So the group who has the problems with both have the most sensory symptoms. The ones that don't have issues have the fewest. And the other two are in the middle."

Classifying children into subtypes means therapy can be specifically targeted for maximum benefit.

Next, Alison is keen to investigate whether the replication within subtype groups is isolated to sensory features so therapy can be further customised.

"We are trying to establish whether children in a common sensory subtype tend to also have common difficulties or strengths in other areas, like IQ, general behavioural issues and communication abilities," she discloses.

Using neuroimaging to measure the electrical activity of the brain, preliminary data suggests that the sensory subtypes do have different brain profiles.

"There is a lot of interest in investigating whether subtypes relate to physiological differences, and even further back, at a cellular and genetic level, are there patterns there?"

Understanding the links between behavior and biology may reveal new methods of treatment.

Alison's work has already begun to inform treatment, and has the potential to change the anticipated trajectory of children with ASD through early diagnosis. She is also looking for sensory-related patterns in intervention outcome data in partnership with early intervention providers, such as the AEIOU Foundation for children with autism.

It is the first year of life, however, that Alison believes may hold the key to early diagnosis, and therefore offer parents a greater window for intervention.

"Sensory and motor systems are necessarily intertwined in the first year," Alison explains.

"The motor system is developing, and we know that motor skills are highly dependent on the accurate interpretation of touch, movement and body sense information."

Using video data of babies with known outcomes involved in longitudinal studies, Alison is recording response to sound and touch in an attempt to try to code early sensory motor features.

To further our understanding of early sensory motor development in non-autism groups, Alison is now working with the asthma team at the Hunter Medical Research Institute on a large scale study to track sensory motor outcomes in babies born to mothers with asthma. By carefully following large cohorts of young babies with risk factors for medical and developmental difficulties, Alison hopes to pinpoint the sensory motor features in the first year in life that are related to autism risk in later childhood.

"If we study sensory motor development in a very rigorous way in children who have risk factors for ASD, then follow them through to see which of those children go on to get ASD, we hope to identify early developmental delay."

"Working with babies, we have the potential to change their brain wiring, modifying their responses so they find sensory stimuli less distressing. Both as babies and later in life"

Over 20 years of experience in paediatric occupational therapy practice, health service management, research and teaching are useful background to a major role in the genesis of a new collaborative of researchers interested in neurodevelopment at the University of Newcastle.

Reflecting on her career, Alison admits that it wasn't just her compassion for children with ASD that drew her sole focus.

"Early in my career a fellow academic and parent of a child with ASD, put together an Autism research group," Alison recalls.

"She saw me in a meeting one day, and said 'I need an OT for my research group and I pick you.' This area literally chose me."

"I think we have made some really good inroads to be honest," Alison says.

"This area still has so much potential which is exciting."

"And we can already be a bit more discriminatory with therapies. With so many to chose from, I think that is really helpful."