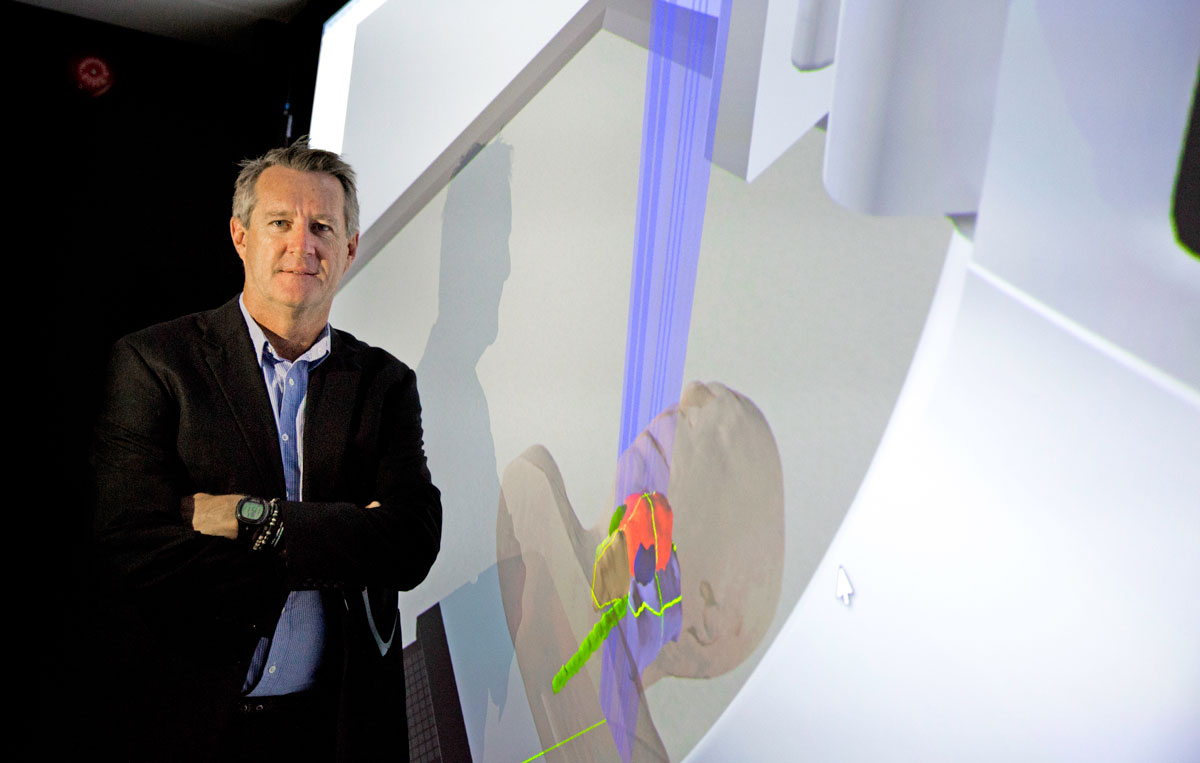 In his career in cancer care (oncology) Associate Professor Shane Dempsey knows what it means to multitask. As a radiation therapy clinician he worked to provide each and every patient with an individual treatment plan best suited for them, utiising to its full potential the ever-changing technology available. He also recognised that a diagnosis of cancer brings with it an enormous emotional response for both the patient and their families, and Associate Professor Dempsey sought to address this unmet need by ensuring that each individual patient and their family be provided with the supportive care they needed across their cancer journey.

As an educator of the future oncology workforce both in the Hunter and across Australia he ensures that students and graduates have comprehensive training to provide both patient focussed care, and an ability to assess and implement the most current of clinical practices into every day radiation therapy treatment.

“Both roles let me compare and contrast existing and emerging radiation oncology related methods,” the Head of School of Health Sciences explains.

“We’ve been really lucky with the millions of dollars’ worth of equipment our industry partners and the federal government have provided so that we can both research new approaches to treatment, and train students and clinical staff in the ways of the future .”

A personal research goal is to continually modify existing treatment processes, and develop new approaches, that “maximise” doses to tumours and reduce them to surrounding tissues.

“Radiation planning systems of the past produced terrible anatomical images – you couldn’t see the malignant tumours or the surrounding organs very well, if at all, so you often had to rely on your own knowledge of human anatomy to guesstimate where they were,” he laments.

“This then meant you had to put wider margins around the radiation beams, which detrimentally affected patients’ otherwise healthy body parts.”

“Modern imaging and treatment technology now allows us to image, locate and accurately contour cancers in three dimensions (3D). By doing this we can now provide radiation treatment that significantly reduces radiation doses to the normal organs while at the same time increasing the dose to cancer targets. This increases the likelihood of a curative treatment.”

Associate Professor Dempsey explains how he has worked closely with world leading clinical partners and the Federal government to develop a simulation suite of radiation oncology equipment that can provide the most up to date training found across Australia and indeed the world.

“To train students and graduates to be flexible and reactive to the patients and technology that they will work with across their future, we have treatment planning labs that allow students to develop and assess plans using the most modern imaging and 3D treatment technologies. We then have a life-sized 3D virtual linear accelerator treatment room (VERT - Virtual Environment for Radiation Therapy), which is the primary instrument that delivers radiation, where students can import their patient focussed treatment plans and see whether their plan works on their patient” he divulges.

“These facilities allow our students to clearly illustrate and articulate theoretical concepts and to acquire invaluable skills in a simulation suite, rather than practicing on real patients in busy clinics.”

Pivotal in the creation of the National Radiation Therapy Clinical Assessment Form, which has allowed for students from programs across Australia to be assessed on clinical placement against a single national standard, Shane is simultaneously dedicated to standardising content and curricula for students in Australia.

Shane elected to take a “very roundabout route” to get to this point, beginning his career as a Sydney-based clinician after receiving a Diploma of Radiation Therapy from the College of Advanced Education in 1981.

“I worked at the Prince of Wales Hospital for five years,” he recalls.

“This included a six-month secondment to Papua New Guinea.”

Returning to Australia in 1986, Shane spent the following half decade dividing his time between the city and the coast. Finally deciding on the latter, he accepted a lecturing role at the University of Newcastle in 1992, as well as enrolling in the postgraduate Clinical Epidemiology program.

“I wrote the Bachelor of Medical Radiation Science (Radiation Therapy) program during this time too,” he shares.

“It’s since grown exponentially, becoming the country’s biggest radiation oncology with an annual intake of 60, and our graduates practice right across Australia and internationally in many countries.”

Adding another feather to his already impressive cap, Shane undertook a PhD in 2006. Operating on the proviso that “health is a teamwork environment,” the energetic scholar’s five-year probe sought to identify those desirable personal development traits required for current and future employees.

“I asked second-year students to work in groups and make a conference poster on a professional topic of their own choosing,” he describes.

“Then I asked them to do a reflective inventory, singling out the most important things they learned throughout the exercise.”

“They reflected that as professionals learning how to work together were the most important traits they learnt. It’s changed the way I teach.”

Ensuring that his research has direct application to cancer care, Shane’s research has led to a number of creative international collaborations. The first – and perhaps most innovative – saw Shane team up with a graduate working in British Columbia, Canada, and fellow UON academic Associate Professor Warren-Forward, to introduce a new form of treatment for prostate cancer to the cancer centre that the graduate worked in.

“Up until then, we were using what’s called three-dimensional conformal radiation therapy (3DCRT), which positions beams at various angles around the body,” he reveals.

“With novel volumetric-modulated arc therapy (VMAT), however, the linear accelerator turns constantly around the patient so the beams aren’t stationary during treatment.”

“At the same time that it’s rotating, the machine is also slowing down or speeding up at different locations, spitting out more radiation at certain points around the patient, and turning on and off at specified phases.”

“The patients were analysed against the same outcomes, such as nausea, vomiting, skin redness, and radiation dose across the cancer volume and surrounding organs” he clarifies.

“We showed a statistically significant decrease in side effects for cancer sufferers undergoing VMAT – this was a great result and improved their quality of life during treatment and into the future.”

“The treatment also turned out to be faster and more accurate for patients as well.”

Shane and the team have since published these findings, with their first piece Scopus’ most downloaded article for the journal in 2014. The second, made publicly available in early 2015, was selected as a peer reading on better pathways to 3DCRT.

More recently, Shane has been supervising a Newcastle PhD student at the Calvary Mater Hospital who is seeking to integrate ultrasound with radiation therapy. The pair is hoping to improve current post-operative treatment methods for breast cancer sufferers.

“The boost site where the primary tumour is located is removed during surgery, but we need to find its original location to provide that site a high dose of radiation,” he illuminates.

“We use ultrasound, which is a non-ionising, non-harmful radiation, to see and treat the seroma, a pool of fluid left over after the lump is taken out. If we can detect this site we can then match the radiation beam to the primary tumour bed much more accurately, which may decrease some breast cancer recurrences.”

When asked what he is most proud of, Shane is quick to answer.

“Building a national approach to radiation therapy,” he says.

“The University of South Australia, RMIT, Monash, Queensland University of Technology, Curtin University and the University of Newcastle are partners in this, working together on all aspects of curriculum development and implementation, student placement programming and research translation.”

“We’ve stopped being silos of competitiveness and have opened our doors to industry and other tertiary institutions.”

Believing that we can “no longer solely rely on a small number of specialist doctors to help get us through a growing and more advanced workload” Shane is also determined to see this field – and others – adopt a more holistic approach to patient counsel and care.

“They need to take on new scopes of practice.”