From harbour to hospital

Associate Professor Stanwell is an active clinical researcher in the area of mild traumatic brain injury and sport-related concussion. 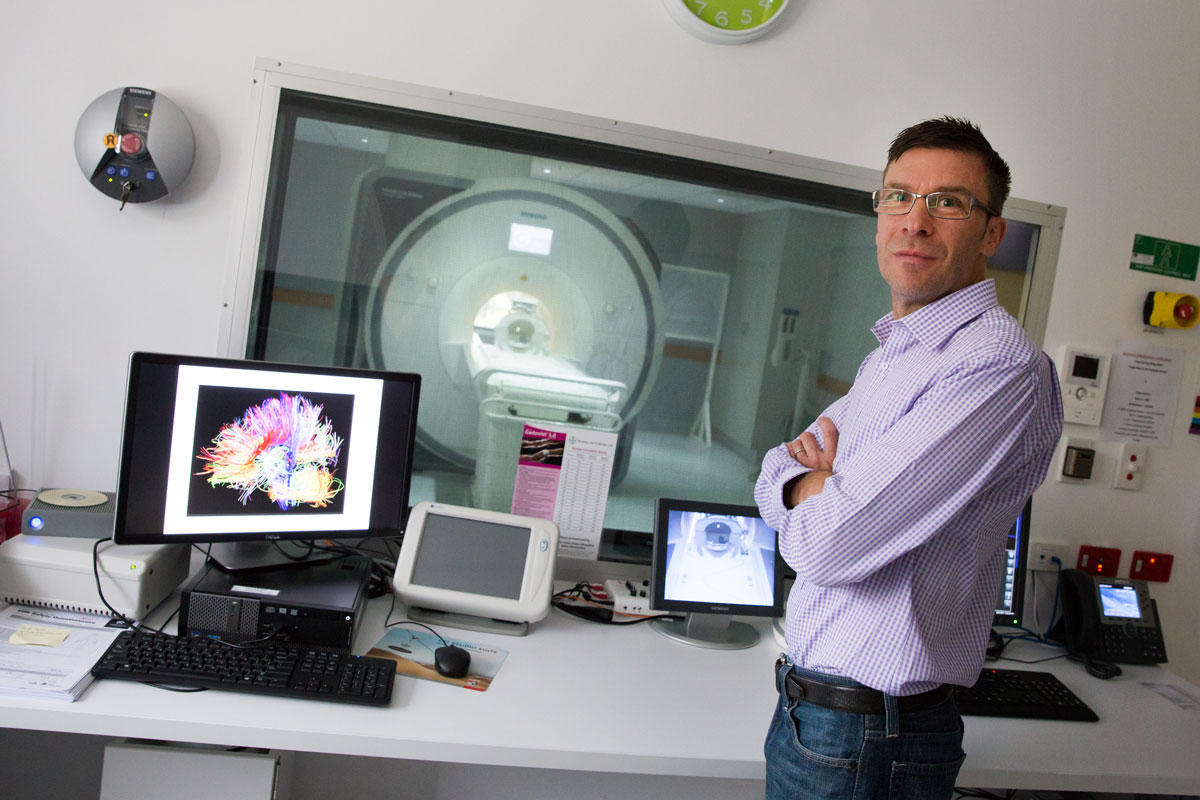 Originally engaged in non-destructive testing in heavy industry, Associate Professor Peter Stanwell’s career has taken him on a colourful journey through the development of a number of magnetic resonance imaging (MRI) techniques and applications.

Some of Peter’s first jobs had him taking x-ray images of welded bulkheads on Newcastle’s iconic Stockton ferry, the Australian icebreaker Aurora Australis and some of the biggest mining draglines in the world. But after taking radiographs of metal welds, he sought a greater challenge.

“I’d always been interested in the human body, and how diseases were diagnosed and treated by doctors. After using radiation in industrial applications I got curious about what else x-rays could be used for.”

Peter enrolled at UON to study diagnostic radiography, and after working as a radiographer at John Hunter Hospital went on to pursue a 12-month clinical fellowship in MRI at Johns Hopkins Hospital in Baltimore, USA.

“I had been working clinically at the John Hunter Hospital and in 1993 HNE Health announced they would be installing an MRI scanner.”

“I could see it was a new technology and a greater challenge.”

Since its introduction in the 1990s, MRI has proved to be a safer, more accurate and less invasive diagnostic test than a number of other traditional medical tests. Moreover, MRI is a safe and accurate way to measure any number of physiological attributes that are not only useful in diagnosis but also in measuring response to certain drugs and therapies. MRI is now used in many clinical trials to assess early response to therapies in conditions such as cancer, dementia and arthritis and provides a more personalised approach to therapies. It is now estimated that 180 million MRI scans are performed annually worldwide.

Innovative researchers like Peter work to integrate this technology into clinical practise, such that MRI measurements can be routinely used throughout development and improvement of therapeutics.

“If we don't understand the pathologic mechanisms involved in a health condition, then we’re limited in how we can treat it.”

“Once we can quantify attributes associated with a health condition, we have a means to work out whether a treatment is effective or not.”

The beginning of an influential research career

“After my time at Johns Hopkins, I decided I wanted to get involved in medical research. Hopkins was just such a powerhouse of medical innovation. They used cutting-edge technologies every day to improve patients’ lives.”

Peter didn’t have to wait long for an opportunity to arise.

“After setting up a clinical MRI service at Wagga Wagga, I found myself establishing a shared clinical and research MRI facility at The Sydney Adventist Hospital, which was used by clinicians as well as medical researchers from the University of Sydney.

“I spent half my time undertaking diagnostic radiology studies for San Radiology, and half my time working alongside medical researchers, and it was through this work that I was offered the opportunity to undertake my PhD at University of Sydney.”

Having spent time using this specialist equipment, utilised by researchers as well as clinicians, Peter became more interested in the field of personalised therapy, and where these collaborations could lead.

“I started thinking, ‘why don't we combine the two - clinical and research practises - and see if we can then personalise people's therapies?’”

Throughout his postgraduate studies, Peter developed new imaging approaches for investigating chronic pain, melanoma and breast and ovarian cancer. These methods saw him recruited to work as a MRI physicist in the Department of Radiology at Brigham and Women’s Hospital in Boston, and becoming an Instructor in Radiology at Harvard Medical School before he had even finished putting his thesis together.

Throughout his time in the United States, Peter developed and implemented diffusion-weighted and dynamic contrast-enhanced (dCE) MRI techniques which is still used today in pre-surgical planning for mesothelioma patients. He also created the MR imaging protocols that became the standard technique to investigate patients with breast disease at the Brigham and Women’s Hospital, Dana-Farber Cancer Institute, and other Harvard-affiliated hospitals. And he worked with teams of research radiographers to increase their knowledge in advanced MRI techniques to enhance their research capabilities.

A desire to return home brought Peter back to Newcastle, where he began collaborating with Professors Chris Levi and Mark Parsons on their stroke research.

“I initially split my time between Newcastle and Boston, flying back and forth up to six times a year so that I could continue my clinical work with Brigham and Women’s and support medical researchers at Harvard Medical School.”

Inspiring the next generation of innovators

“Students need to know the nuts and bolts of the technology - that will allow them to comprehend the physical principles of MRI so they can understand how to use them to study specific biological processes. If you are going to be truly innovative, you need that fluid understanding, or you’ll just end up replicating what someone else has already done."

“I also think it’s incredibly important for researchers to understand that we’re not going to go on forever and we need to train the next generation.”

Although chemotherapy is the standard of care for many cancer patients, the side effects can be hugely distressing. When Peter saw ongoing development of personalised cancer treatment in Boston, it occurred to him that medical imaging could play a role in monitoring a patient’s individual biological response to cancer treatments.

One of Peter’s ongoing research projects, in collaboration with the Dana-Farber Cancer Institute in Boston, is in chemotherapy response prediction in breast cancer.  He also working on a project using MRI to monitor cancer response following chemoradiation.

“Depending on the type of cancer, particular MRI metrics can predict within 48-72 hours after the initial treatment whether or not the patient is going to respond to the delivered therapy. This is incredibly important information to guide treatment.

“If you can measure something, you can help diagnose it and you can help to tailor individual therapy to optimise successful cancer treatment.”

“Once I started teaching at UON, I also began to supervise my own PhD students and one of them (Dr Andrew Gardner) was interested in sport-related concussion.”

This in turn sparked Peter’s interest in mild traumatic brain injury (mTBI), and the impact that these common brain injuries can have in later life.

Abnormalities are rarely observed on radiology tests following mTBI, as the structural and physiological imprint is below the threshold of detection of conventional neuroimaging methods. However, newer, advanced MRI techniques that are able to probe human physiology have recently afforded an opportunity to study the after effects of mild brain injuries. Moreover, it is these techniques, and the window that they provide into physiological changes, that has increased our knowledge of how mTBI affects brain function, and how the brain recovers from brain injury.

Studies in this field are particularly difficult to perform due to the variable latency period between the injury itself and the manifestation of symptoms, usually in later adulthood.

“I’ve now started working with collaborators at the Florey Institute of Neuroscience and Mental Health in Melbourne who have a model for mTBI. Together we’ve started investigations comparing MRI scans of intact brains with the latest microscopy techniques to look at the finer details, beyond what MRI can tell us. This work is being enhanced by collaboration with the 3D Tissue Clearing and Lightsheet Microscopy Facility, led by Dr Jamie Flynn from HMRI, with access to the Facility’s bespoke CLARITY light-sheet microscope which will allow us to co-register 3D lightsheet microscopy datasets with in-vivo MRI datasets.”

By comparing these two datasets – in vivo experiments and advanced microscopy techniques - we hope to validate the use of MRI metrics in this new context. Additionally, Peter hopes to discover how exactly mTBI develops into the serious neurological conditions that some patients experience in late adulthood.

“If we can understand it, we can do something about it.

“My hope is that we can advance the understanding of traumatic brain injury and identify practical biomarkers of mTBI - so that evidence-based medical decisions can be made that will transform the clinical management of these injuries worldwide.

“I do sometimes stop and think, ‘How did I get from taking x-rays on ships to undertaking medical research at Harvard?’”, Peter laughs.