A helping hand for fathers

A team leader within the Faculty of Health and Medicine's Family Action Centre, Associate Professor Richard Fletcher is shining a spotlight on the role of fathers. 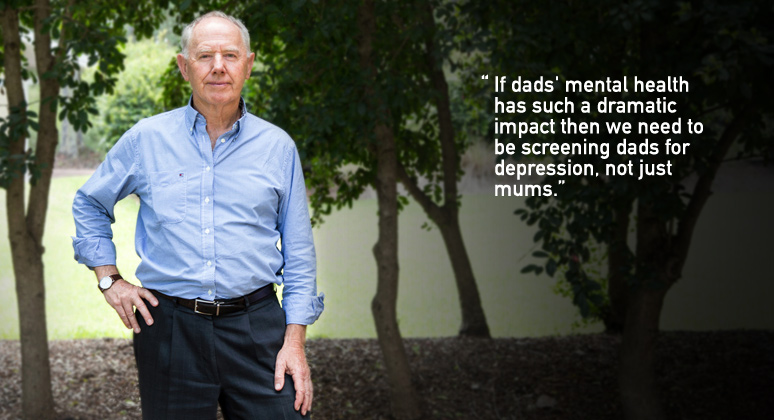 Associate Professor Richard Fletcher leads the Fathers and Families Research Program (FFRP) within the Family Action Centre at the University of Newcastle.

The FFRP team focus on research and teaching around fathers, particularly fathers of young children and babies.

Richard believes that we as a society need to change our expectations and beliefs relating to the role of fathers, for the benefit of the whole family and wider society.

Actively working towards this goal, Richard and his team have several projects in the works. They are in the process of trialing a smartphone based program that will offer information, mood assessment and support for new and expectant fathers, in a bid to identify and address paternal perinatal depression.

Another project, run by Dr Jennifer St George, is assessing the importance and safe limits of rough and tumble play between fathers and children, beginning with pre-school aged children.

A third project sees Dr Chris May working with couples on parenting partnerships. Through identifying and encouraging factors that create successful co-parenting dynamics, the projects aims to enhance the well-being of all members of the family.

As a result of the team's work, both government departments and non-government organisations (NGOs) have begun to review their policies and standard practices to identify and enhance opportunities for fathers' involvement.

As well as teaching courses in the Master in Family Studies program, the team provide consultancy services to organisations around Australia, and across the globe, on how to more successfully engage fathers in areas that have previously been dominated by maternal caregivers.

Richard sees the consultation work that he and the team at the Family Action Centre undertake with health professionals, and other services such as schools and welfare agencies, as a giant step towards changing understandings of the roles of fathers. But there is still a long way to go.

"There's still a very strong idea in the community and amongst professionals about parental roles. Many think that engaging mothers as the primary caregiver is sufficient, and fathers are just an optional extra," he explains.

"Fathers are invisible in many places, and that is endemic. Not because people dislike fathers, but because the system is set up to be focused on mothers."

Some services and organisations are aware of the need to engage dads, but have been unsuccessful in their attempts.

"When people are challenged about this, they generally want dads involved," Richard affirms.

"Often, however, they just don't know how to do it."

"If dads' mental health has such a dramatic impact then we need to be screening dads for depression, not just mums," Richard explains.

"This is a relatively new idea."

"We were so focused on the mum being the main affect that we didn't factor in the dads. Now we see it matters a lot, right from birth."

This increased pressure comes at a time where changes to routines and relationships can create stress and isolation, making dads vulnerable.

"We always worked on the idea that dad's should come to the same groups as the mums, parenting classes and things like that," he recalls.

"But then we thought, what if you weren't trying to do that, what if you accepted the fact that they're not able to come in, how do you talk to them?"

In response to these limitations, Richard and his team have designed a smart-phone based program that allows mobile connection for new and expectant dads.

Participants will receive texts containing information and links, and self-report their mood. If the mood tracker identifies them as needing extra support, they will be offered a phone call from a counsellor trained in this area.

Following the recent success of a six week pilot of the SMS4dads program, a twelve month trial will start later this year. Funding for the program, which includes a website and social media presence, comes from Beyond Blue and the Movember Foundation.

"When dad's miss the classes or activities, they miss the contact and the links to other people.  They may never get the chance to say to anyone, look I'm really stressed," he points out.

"This is a way of bringing dads into the system and keeping them hooked up," explains Richard.

Although only in the trial phase, the SMS4dads project has already produced spin-off programs.

Richard and his team are working with the Young and Well Co-operative Research Centre, local Aboriginal communities, and the University of Newcastle's Centre for Rural and Remote Mental Health to develop a website for young Aboriginal dads.

The project participants receive the same smartphone mood assessment and information as the SMS4Dads users, but also receive follow up support directly from community leaders and project facilitators, Charlie Faulkner and Craig Hammond.

A pivotal component of the project involves the participants sharing their stories. Filmed interviews with the fathers will be available on the website for other dads to access.

Another spin-off is in the works with the Queensland Department of Health.

"They were looking to run a project using SMS messages for mums. When they heard about our SMS for dads projects they approached us to partner with them," Richard explains.

"It's a much more mainstream approach so we're very excited about that."

Richard credits a varied career, a talented and innovative team, and much life experience for affording him the insight needed to address the challenges related to actively engaging dads.

Following a stint as a high school science teacher, Richard took up to a position in the Equity Unit at the University of Newcastle.

From there his maths and teaching qualifications gained him a position in Holistic Health within the Faculty of Health.

After completing his masters in Medical Science, studying epidemiology, Richard earned his PhD focusing on fathers and attachment.

Although not a clinician himself, Richard often works with health professionals on issues related to fathers, and has delivered many antenatal programs for expectant dads.

He credits his own family with giving him the advanced understanding of the role of fathers needed to make his work relevant.

"I have three daughters and two stepdaughters,"

"My kids would say they taught me just about everything I know and they'd be right. They've taught me a lot, and still do."