The Science of Breathing

A renowned researcher, Professor Darryl Knight is spearheading medical breakthroughs to make life a little easier for people suffering from a range of respiratory diseases. 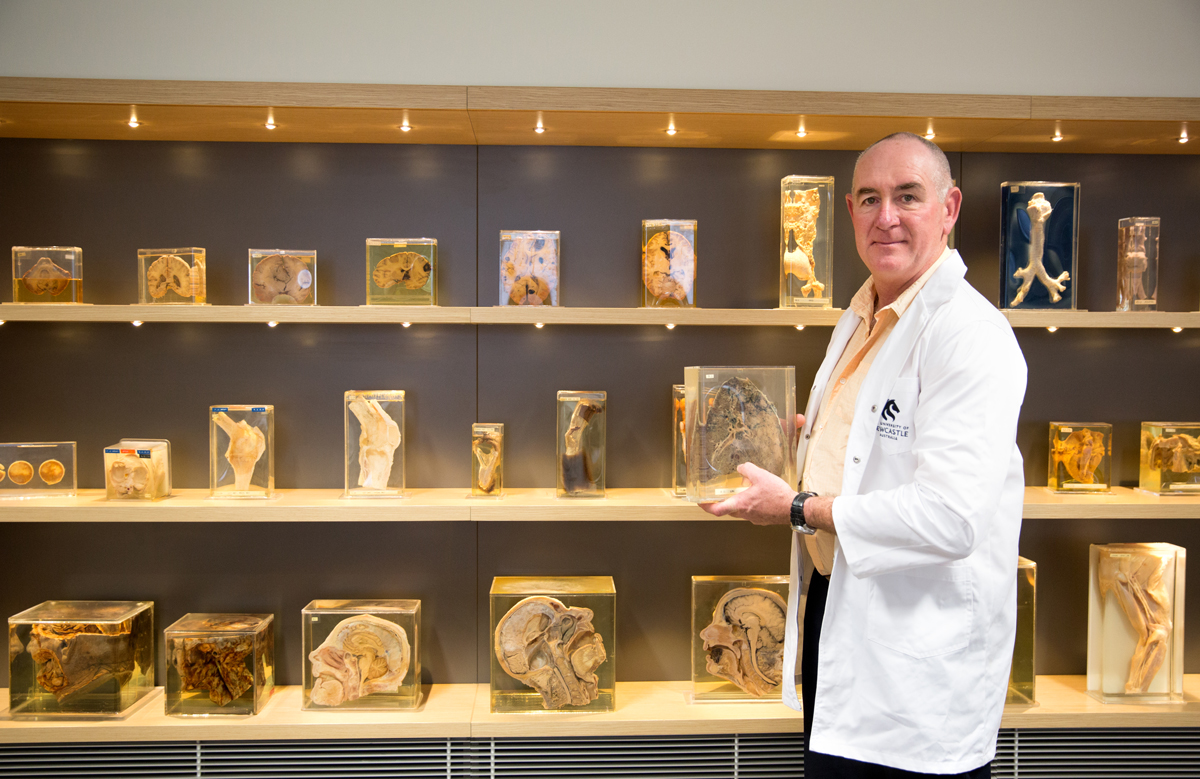 Most of us don’t think about breathing until we’re short of breath. We are the lucky ones. For those suffering from a handful of serious medical conditions, however, breathing – and more specifically, an impaired ability to do so – is a concern that frequently prays on the mind. Dedicated to helping this group is Professor Darryl Knight, whose evolving understanding of abnormal repair responses within the lung is contributing to a growing and extensive research knowledge base.

“My aim is to figure out the pathological mechanisms that underpin insidious and sometimes chronic changes to the architecture of the respiratory system,” he elaborates.

“In asthma, this is called airway remodelling.”

“Current therapies target inflammation and symptoms but have no effect on this.”

“The situation is worse with pulmonary fibrosis because the only two drugs that are approved in the world (and not in Australia) for its treatment are unable to halt disease progression.”

Taking a “very circuitous and non-conventional” path, Darryl admits he wanted to be a naturalist before developing an interest in human biology.

“I was first exposed to the lungs when I undertook my Honours project, which looked at the receptors that Ventolin acts on to relax the airways in an asthma attack,” he recalls.

“This curiosity about the respiratory system was piqued during my stint at Sir Charles Gairdner Hospital, where I worked as a research assistant with a chest physician collecting pig lungs from the local abattoir and eventually, human lung tissue from patients undergoing surgery for the removal of cancers.”

“Around this time, the role of the epithelium, which is the thin tissue that forms the outer layer of the body’s surface and lines its hollow internal structures, possibly being more than a physical barrier was being postulated and the first studies showing epithelial damage in asthmatic airways in vivo were published.”

Seeking to keep this momentum going, Darryl commenced a PhD at the University of Western Australia in 1989. Building on the findings of his predecessors, the ‘Respirology’ Editor’s groundbreaking in vitro study is widely acknowledged as one of the first to provide a “functional correlate” by showing that the epithelium inhibits airway smooth muscle contraction.

“Originally, my candidature was pharmacology-based,” he shares.

“Segments of human airways were suspended in organ baths and assessed for contraction/relaxation.”

“At the latter stages, however, I crafted molecular and cell biology-based techniques, such as polymerase chain reaction (PCR) to measure gene expression and immunohistochemistry to analyse protein expression.”

Wanting to make his mark professionally both here and abroad, Darryl stayed at the University of Western Australia until 1995 before relocating to the University of British Columbia as a Thoracic Society of Australia and New Zealand (TSANZ)-funded Postdoctoral Fellow. Based at its prestigious Pulmonary Research Laboratory, he spent the next two years investigating the role of the Interleukin-6 family of cytokines in regulating airway function.

“Cytokines are substances that are secreted by cells of the immune system and have an effect on other cells,” he explains.

“We were able to show for the first time that the former is widely present in many cell types in human lungs, including sensory nerves and eosinophils, and can regulate their function.”

“We also showed that OSM is present in the lung’s structural cells and involved in wound healing and fibrosis.”

A breath of fresh air

Currently, Darryl is consumed by two main research questions. He’s working to discover how differentiation of the epithelium and fibroblasts contribute to asthma and pulmonary fibrosis, as well as how the lung’s connective tissue regulates the behaviour of epithelial cells and fibroblasts. Both studies are funded by the National Health and Medical Research Council and involve collaboration with several universities around the country.

“In our Asthma program, we’ve teamed up with investigators from the University of Western Australia and are obtaining epithelial cells from children and adults who suffer from the disease,” he reveals.

“We’re examining differentiation in these cells when they are grown in specialised culture conditions, which allow them to form a multi-layered barrier similar to the one occurring in the airways.”

“In our fibrosis research program, we’ve enlisted the help of scholars from the Universities of Sydney, Melbourne and Western Australia as well as the University of Victoria in British Columbia.”

“We are using state-of-the-art technology, called Maldi-imaging, to visualise the relative proportion and spatial distribution of hundreds of proteins in human lung tissue on a microscopic slide.”

“This will enable us to better understand the pathogenesis of pulmonary fibrosis.”

With an equally strong focus on industry partnerships, Darryl is also in the process of conducting a large study with a multinational pharmaceutical company to determine new targets related to the barrier function of the epithelium in asthma and chronic obstructive pulmonary disease (COPD). He is planning to extend his field of study to examine common mechanisms of fibrosis in multiple organs too.

“It’s a really exciting time in respiratory research,” he asserts.