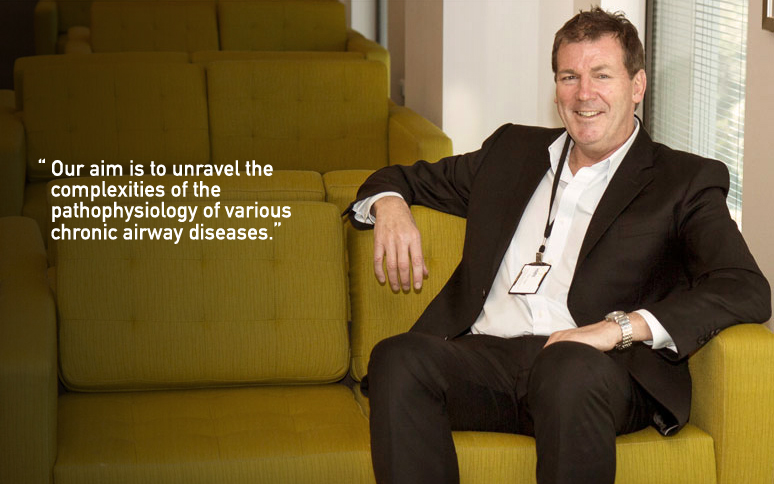 Laureate Professor Paul Foster is a leader and a visionary keen on making life easier for patients suffering from respiratory disorders. As Director, he coordinates investigative efforts for a variety of prominent, preclinical research groups in the Hunter, seeking to solidify links between disease state, infections, inflammation and immune responses.

"Our focus is on identifying the molecular and cellular pathways that cause these conditions," he explains.

"It's a really fundamental approach – we're looking at the hows and whys at a cellular level."

Paul is the Director of the University of Newcastle's Priority Research Centre for Asthma and Respiratory Diseases, the Director of VIVA (Vaccines, Immunology, Viruses and Asthma) at the Hunter Medical Research Institute, and the University's Chair in Immunology. He also teaches into the second and third-year immunology programs in the School of Biomedical Sciences and Pharmacy.

"I'm not physically involved in experimentation anymore," he concedes.

"I hold group meetings to help analyse the data that comes in on specific projects."

"It's nice to be able to contribute to the generation of knowledge that underpins really important work."

"Our aim is to unravel the complexities of the pathophysiology of various chronic airway diseases."

Further afield, Paul has contributed significantly to the global advancement of respiratory medicine, bringing together clinical, applied, epidemiological and basic science research to examine problems associated with asthma, emphysema and respiratory infections. His Centres' discoveries, made by senior scientists, postdoctoral fellows, PhD candidates and eager undergraduates, have similarly informed the development of new therapeutic strategies and the translation of basic work to clinical outcomes.

Paul began his research career with a first class Honours Degree in pharmacology and biochemistry from the University of Western Australia. Looking at smooth muscle functioning in asthma, he sought to understand the role of this cell in asthma.

"Smooth muscle lines the walls of blood vessels and our airways, and controls the diameter of these structures," Paul states.

"In asthma airway, smooth muscle constricts and narrows the breathing tube, leading to limitation in airflow."

"We showed that steroids increase the effectiveness of smooth muscle relaxation."

Awarded a Commonwealth Scholarship after receiving his Honours Degree in 1983, he moved across the country to undertake a PhD at the Australian National University's John Curtin School of Medical Research. Exploring the biochemical basis of the skeletal muscle disorder known as malignant hyperpyrexia during the four-years of investigation, Paul described a number of molecular defects that predispose to this often-fatal illness, which is triggered by general anaesthesia.

"Calcium regulation is abnormal within the muscle cells and this mechanism is very sensitive to general anaesthetics," he clarifies.

"When an anaesthetic hits the muscle, it causes a release of lots of calcium and a series of uncontrollable rigor contractions, which make the body very hot."

"Malignant hyperpyrexia is a skeletal muscle abnormality which when triggered, leads to loss of core metabolic control and cardiac arrest."

Paul continued to study the development of this disease post-PhD, staying on at the prestigious medical school to accept several postdoctoral fellowships. Related to a burgeoning interest in calcium movement within airway cells and muscle cells, the extension widened the research scope of a once "very specific and narrow" muscle biochemistry field.

"John Curtin also offered me a professorial position," he discloses.

"The place produced two Nobel Prize winners and was research intensive, so it was exciting to be there."

Paul found a new avenue of investigation once the molecular defects in malignant hyperpyrexia were found and "fully characterised," opting to return to his primary interest in asthma in the late 1990s.

"We started to examine inflammation, which is the abnormal accumulation of white blood cells in the lung that drives asthmatic responses and other lung conditions," he states.

"I was still very interested in that area of research."

Paul then moved to the University of Newcastle in 2002, establishing the Priority Research Centre for Asthma and Respiratory Diseases. Internationally recognised for its talented clinician scientists and doctors, as well as an extensive publication catalogue, the Centre is a national training hub for respiratory medicine and immunology.

"We work on understanding how chronic airway conditions progress," he declares.

"We also look closely at the role of infection in driving pathogenesis."

Current research in Paul's laboratory is aimed at defining the cellular and molecular processes that underlie the development of allergic disease and viral-induced pulmonary inflammation. Another major objective is to gather a concrete understanding of the role of non-coding RNA in the regulation of blood cell development.

"Non-coding RNAs, however, don't code for proteins, and their function is just beginning to be understood."

"We know they can regulate transcriptional networks within cells and therefore profoundly affect the functioning of organs."

"We're trying to figure out why microRNA and non-coding RNA are important in asthma as this will hopefully allow us to identify and create new therapeutic targets."

Paul and his team are simultaneously exploring the role of T-lymphocytes in the onset and progression of several lung disorders.

"These are small cells that can be activated in a very specific manner by specific antigens," he reveals.

"When they are activated appropriately, their job is to kill infectious agents."

"When they are actively inappropriately, they damage tissue and this over time leads to chronic disease."

Pointing to the latter as an all-too-common occurrence in the cells of patients with asthma and emphysema, Paul is seeking to make sense of a complicated disease process. He's breaking T-lymphocytes down into subsets for further study, hoping to harness knowledge about their individual roles in allergic responses and inflammatory conditions of the lung.

"We also recently described the role of generation of a new T-helper 22 subset."

"We now know how to generate that cell that will allow its characterisation."

At the same time, the respiratory researcher is supervising PhD students working on models of severe asthma.

"This particular condition is very difficult to treat," he acknowledges.

"You get given steroids and bronchodilators but often in these patients they're not very effective – and no one knows why."

Paul's team is developing a number of experimental mouse models to investigate, and manipulate, the hallmark features of asthma and other respiratory diseases, and they are looking to classify its key pathogenic events and explore the role of associated infections in disease processes.

From the bench to the bedside

Paul is a fan of collaborative thinking both in and out of the laboratory. He is also a firm believer in the power of translational research.

"What all of us want to see is a better outcome for patients," the research leader says.

"New treatment options would be great and that is our goal."