Professor Phil Hansbro is an internationally recognised researcher exploring the hallmark features of respiratory disease with an aim to improve global wellbeing. 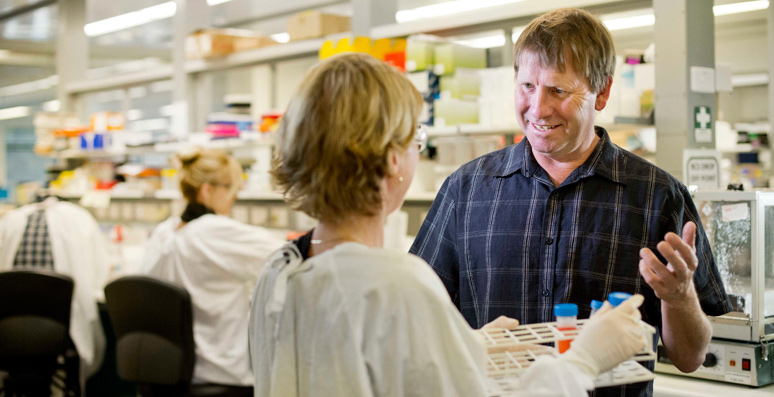 Phil’s plan of attack on the diseases of our airways is quite simple – understand their pathogenesis to identify new avenues of therapy. His approach is recognised internationally as a valuable, ongoing contribution to the field, affording researchers the opportunity to dissect and study the intricate architecture of multiple chronic inflammation disorders.

As Deputy Director of the Priority Research Centre for Healthy Lungs, Phil leads a research team of around 30 researchers who are working to understand COPD/emphysema, asthma, infection and lung cancer. Using the integration of molecular biology theory and practice, Phil and his team use experimental models to explore respiratory disease and infection from several cellular angles.

A leader in the field, Phil has developed four ‘world first’ mouse models of COPD, asthma, infection and lung cancer, which have substantially furthered our understanding of these diseases. With particular emphasis on immunity, physiology and lung function analysis, their simulations of key pathogenic events excite those both in and out of the laboratory. “Our research outcomes have a translational goal,” Phil explains. “We need to first understand the pathogenesis in order to develop new therapies for these diseases.”

Based at the Hunter Medical Research Institute (HMRI), Phil employs both short-term and long-term studies in his research. “We’re focused on identifying potential treatments for severe asthma, chronic obstructive pulmonary disease (COPD), also known as emphysema, and lung cancer,” he says. “Existing treatments only partially suppress exacerbations and some don’t work at all.”

“People with existing conditions are more susceptible to respiratory infections too, so we need to work out why this is and find ways to manage them – or better yet – prevent this co-morbidity altogether.”

Taking a ‘very roundabout route’ to get to this point, Phil began his research career in organic chemistry. The English native completed a PhD in the discipline at the University of Leeds in the early 90s, principally using it to investigate intracellular signalling pathways relevant to cancer. “This involved isolating enzymes and using them to make compounds to produce biomembranes that release molecules, which when over-produced, are important in cancer,” he says.

Phil then headed across the ocean to Australia to undertake post-doctoral studies into protein biochemistry.  Also involving elements of microbiology and molecular biology, this endeavour inspired a widening of research fields and goals.

“This allowed us to explore the functions of these and other enzymes and molecules involved in muscle disease and respiration in some depth,” he states.

After these studies he moved back to England, taking up residency at the University of Cambridge in 1997 to design and test new vaccines against infection with the bacteria Streptococcus pneumoniae. The three-year appointment proved to be a mix of new and old for Phil, piquing his scientific curiosity in airway inflammation while also enabling him to continue using a range of microbiological and molecular techniques.

“Streptococcus pneumoniae is a major respiratory pathogen,” he reveals. “It is the commonest cause of pneumonia and is also an important inducer of meningitis, blood and ear infections.”

Phil continued exploring the pathogenic bacterium after being recruited to the University of Newcastle, Australia, in the late 90s, impressively identifying several factors that protect against asthma. Developing them into therapeutic strategies over 15 years, Phil is currently leading clinical trials with promising results.

In a simultaneous attempt to produce novel treatments for other respiratory diseases, Phil is conducting an extensive series of studies of the lower respiratory tract investigating the role of inflammatory features and immune cells involved in the disease and is hoping his studies will help firm up understanding of the pathogenesis of COPD.

“In some experiments we’re trying to determine the bacterial changes that occur in the lung and gut during the development of COPD,” he says. “So far we’ve found that smoking can alter the bacteria that make up the microbiome in the gut. It also might be possible to ‘drown out’ emphysema-related bacteria using faecal transplants.”

Comically labelled ‘transpoosion,’ the unsavoury science involves taking healthy faeces and putting them in the guts of those with COPD. It’s no laughing matter though as this ‘repoopulation’ remedy may treat the symptoms of the disorder and/or protect against its development.

“We’re in the process of studying bacteria that may be involved and discovering exactly what they do and what they are,” Phil adds. “The idea is that we’ll eventually be able to develop new antibiotics or other therapies against them.”

A master of many disciplines, Phil is concurrently running an experimental trial of epigenetic inhibitors. Acknowledging the increased production of inflammatory genes when people are overexposed to smoke and air pollution, the esteemed educator and investigator is looking to find ways to prevent harmful DNA modifications from occurring.

“Nicotine-induced acetylation causes DNA to unravel, which means it opens up more and allows enzymes to generate greater amounts of these genes,” he explains. “We’re looking at ways of stopping this in animal modelling. Then we can try to work out precisely how the inhibitors suppress disease.”

Exploring the possibilities of therapeutic gene silencing inherent in another form of epigenetics, Phil is also in the middle of specifying the function of microRNAs. Once thought to be junk byproducts of RNA, these small pieces are now widely thought to serve as on/off switches for inflammation.

“Some of them potentially target and destroy anti-inflammatory factors,” he claims.

“Knowing exactly how and why they’re implicated in respiratory disease will help us to develop effective inhibitors.”

With oxidative stress from smoking similarly linked to pro-inflammatory environments, Phil is undertaking a research project on cellular respiration as well. “We need to work out how mitochondria become altered to produce it,” he says. “Then we can develop inhibitors.”

Other new therapeutic targets for COPD are being imagined using a system of elimination, with Phil and his team ‘knocking out’ a number of genes in mast cells to infer probable function and identify novel roles. Their current research implicates mast cells as pathological mediators of several inflammatory conditions.

“Our recent studies show knocking out two different genes decreases the rate COPD,” he says. “This tells us how important they are in the disorder.”

Set to translate this research into practice, Phil is looking forward to applying his therapies to improve health. “Proving their effectiveness takes a long time,” he admits.

“Once we’re sure, we can start exposing our own respiratory cells to allergens or cigarette smoke and using the treatments to suppress elevated inflammatory responses.”

With 29 HDR students under his supervision, and leading a team of young researchers, Phil is looking forward to celebrating the achievements of his young collaborators at UON and HMRI. “We really believe in our students and early career researchers,” he says. “They’re the next generation of scientists.”