An insight into the immune system

Dr Malcolm Starkey is focussed on how early-life infections can lead to long-term health issues. 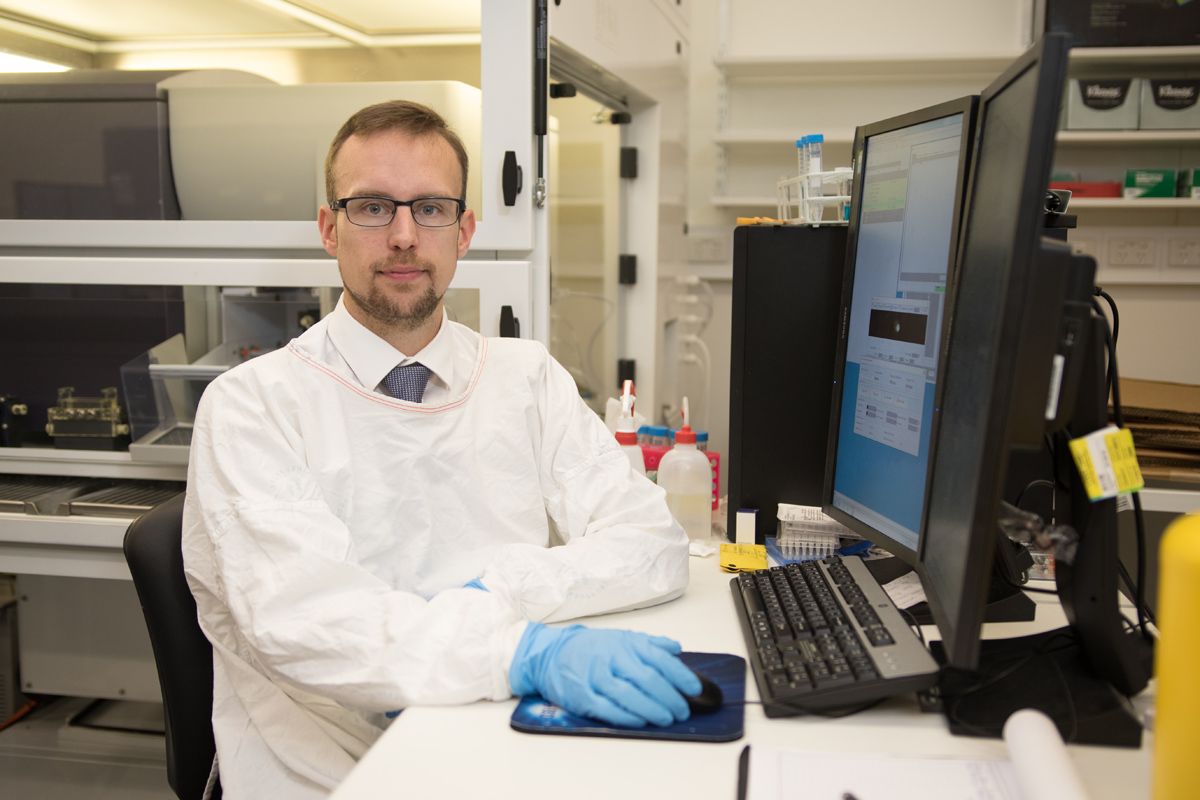 Exploring how these respiratory challenges could predispose individuals to chronic diseases such as asthma and chronic obstructive pulmonary disease (COPD, more commonly known as emphysema), is a key focus of his work. However, Malcolm is also exploring how the immune system repairs the kidney after injury and is investigating strategies to prevent the development of chronic kidney disease.

An immunologist, Malcolm is using experimental models that seek to cement a mechanistic understanding of the early-life origins of chronic diseases. By using novel mouse models that recapitulate the hallmark features of human disease, his work has made important contributions and has led to the identification of novel therapeutic strategies that are under further investigations.

"It can be difficult to recruit humans, particularly young children, for clinical trials," Malcolm explains. "You need to have a strong rationale as to why you're going to do these studies. Our models provide pivotal preclinical evidence to justify this translational clinical work."

Malcolm’s research has already made a number of important contributions to the field of understanding severe asthma and emphysema. Straddling the microbiological and immunological fields, Malcolm's projects stress the "multifactorial" nature of several airway conditions. His work also emphasise the urgent need to identify the roles played by bacteria and viruses in the onset and progression of respiratory diseases.

"Using mouse models, we have learnt that severe respiratory infections in early life can trigger asthma and/or emphysema in adulthood," Malcolm says. "We've learnt that early life infections can cause irreparable damage to the lung, preventing normal healthy lung development and alter the way the immune system develops. It's really quite incredible."

Acutely aware of the lack of therapeutic options available for these chronic illnesses, Malcolm is hoping his research will be used to inform the development of new and innovative therapeutic strategies for patients.

"If we can't breathe, we can't function. We want people to breathe easy."

Of mice, men and molecules

Malcolm's research career began in 2008, when he undertook a PhD with Professor Phil Hansbro at the HMRI. Chiefly focussing on understanding the 'why' behind the 'what is,' the duo looked to figure out how infections predispose people to disease.

"There's emerging evidence that some chronic lung diseases such as asthma and emphysema may originate from infections – contracted either as a newborn or an infant."

Examining multiple molecular pathways, Malcolm sought to elucidate the effects of the transfer of Chlamydia from mother to baby during childbirth. "There is a cohort of neonates that are susceptible to this vertical transmission," he explains. “This is a vital stage because the lung is still developing. If the lung doesn't develop correctly, overall health can be negatively affected."

Malcolm expanded upon this work after his PhD was conferred in early 2014, exploring the relationships between chronic airway diseases and infections. Concentrating research efforts on infections contracted in an early window post-birth, he is also studying the long-term effects of influenza, Streptococcus pneumoniae and nontypeable Haemophilus influenzae.

"Neonates are particularly vulnerable," he describes.

"The fetal immune system is altered in utero to prevent the mother's immune system rejecting the fetus during pregnancy," Malcolm says. "This contributes to an unbalanced and immature immune system in early life."

"If you happen to be unfortunate enough to contract a series of respiratory infections in early life, you are more likely to experience lung problems in the long term."

With recent clinical data showing some bacteria are important in this regard, Malcolm duly pursued this avenue of contemporary interest. "For some time it was thought that viruses cause this predisposition to asthma," he says. "As it turns out though, it probably doesn't matter whether it's viruses or bacteria – it can be both. It depends on many circumstances coming together, such as genetics, age of infection and the environment."

"We have found that early life infections cause the production of disease inducing factors. These factors promote long term effects by altering the immune system as well as the structure and function of the lung."

Malcolm's research has shown that therapies that target these factors may be effective new treatments for infection-induced chronic lung diseases.

Hypothesising that certain bacteria and viruses have an impact on the whole body, Malcolm and his team are after scientific proof of long-term systemic effects, such as changes in lung structure and development, and inappropriate immune system responses in the body.

Parts of a whole

Still dedicated to investigating the interplay between early life infections and acute airway conditions, Malcolm is working to address his evolving, specialist area from multiple angles and is aiming to examine links between these insults (infections) and diseases in other organ systems.

One recent project that’s attracted Malcolm’s attention is understanding how immune cells repair the kidney after acute kidney injury. “The incidence of acute kidney injury is increasing globally,” says Malcolm. “We know that there is a strong association between acute kidney injury and the development of chronic kidney disease, so that’s where I’m focussed.”

Exploring the factors that regulate innate lymphoid cells (ILCs) and their role in tissue maintenance and repair, Malcolm is leads a team looking to explore chronic kidney diseases. Around 1.7 million Australians have kidney disease, a condition which contributes to approximately 14 per cent of all Australian deaths.

Working with a team of local and global researchers, Malcolm hopes that this research can play an important role in the understanding of this complex health issue.

Recognised as a leading young researcher in the field of paediatric respiratory medicine after winning the internationally competitive Klosterfrau Grant for research of airway diseases in childhood in 2015, Malcolm points to "tailor-made, personalised medicine" as the science of the not-so-distant future, hoping to pinpoint more discrete subsets of patients and how he can better treat them.

"A critical goal of our research is to understand what factors drive the development of chronic diseases and devise strategies to stop this from occurring."