Professor Manohar Garg is one of the University's leading Health and Nutrition researchers and has recently been heralded as a revolutionary in his field with two important industry honours.

In November 2012, Professor Garg was awarded the 2012 Nutrition Society of Australia Medal. This medal is awarded to an Australian nutrition scientist with an outstanding record in the field of animal or human nutrition.

"This medal is presented on the basis of overall research performance," said Professor Garg.

"My research has had an important impact on human health but this award was also measured on the overall impact of my research including quality and quantity of research publications, links with stakeholders including those in the industry, supervision of Research Higher Degree students and contributions to the Activities of the Nutrition Society of Australia."

Professor Garg was also awarded the prestigious 2012 Professor Austin Doyle Medal. This honour is in recognition of his outstanding contributions in cardiovascular sciences, especially the role of nutrition in preventing complications of cardiovascular disease. 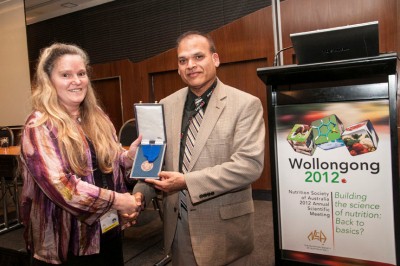 "This award is a good reinforcement that what I am doing has not only benefited many people, but it is also valued amongst the industry and colleagues," he said.

This medal was presented at the 22nd Annual Scientific Meeting of the Indian Society of Hypertension, where as part of the honour Professor Garg also delivered the Professor Austin Doyle Oration.

Austin Doyle was the President of the International Society of Hypertension and had a profound impact on hypertension research, first in Australia, and ultimately worldwide. The award was named in his honour.

For more information on Manohar's work see the Centre for Physical Activity and Nutrition.