Ever since her first experiences as an undergraduate Science student at UON, Dr Jessie Sutherland remembers being inspired by reproductive biology. 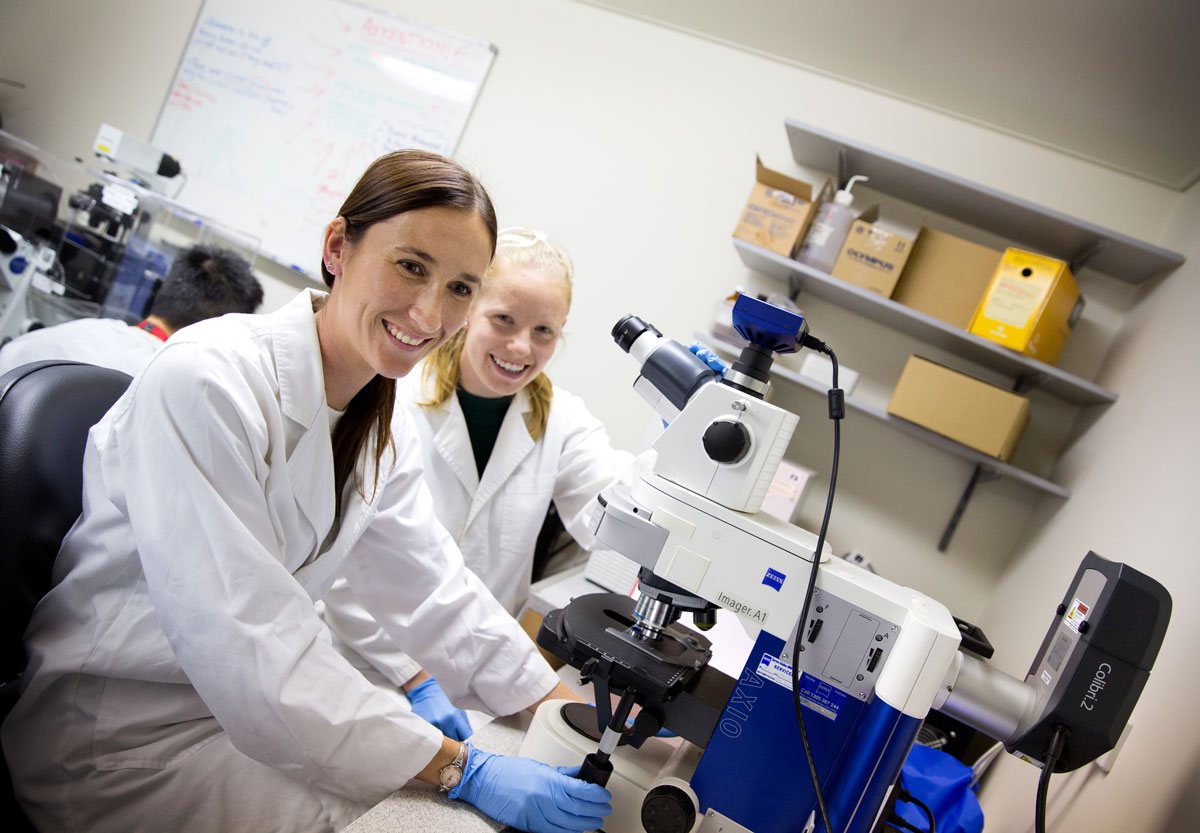 “The (Reproductive Science) group that we have here is just amazing. It is really inspiring.”

Jessie’s academic career started when she came across a summer scholarship program supervised by Conjoint-Professor Eileen McLaughlin, who has been her mentor ever since.

“I found her really engaging. There were hundreds of students in those first year lectures and she was still very engaging and personable.”

“Teaching is one of my favourite things."

“It’s one of the most rewarding and positive experiences that you will have in academia, where you are often dealt harsh criticism in the form of grant rebuttals, peer review and article rejection."

“I’m very passionate about the subject material and I think that really comes across to the students. It’s beautiful to have them engaged and asking questions."

“Teaching is definitely something I want to continue to do in the future.”

Indeed, Jessie is continually improving her teaching and leadership skills through her participation in the Advanced Leadership Program. The mentoring program is designed for women working in the higher education sector and Jessie was able to apply for a place with her HMRI Equal Futures grant which she won this year.

Jessie is also working to develop a new Pregnancy and Development course, focussing on online content which will enable more students to undertake studies, as part of the new program structure of UON’s Biomedical Science degree.

As well as her passion for teaching, Jessie has had great success in her research career, which has focused on the JAK/STAT molecular pathway in ovarian development. She has also spent time investigating the role of Musashi proteins in spermatogenesis, the process by which spermatozoa are developed.

Spermatogenesis is dependent on the maintenance of a population of stem cells, known as spermatogonia. Stem cells are distinctive in that they have the potential to divide and give rise to daughter cells with specific characteristics; in this instance - spermatozoa.

Spermatogonia go through long periods of relative ‘genetic silence’. Whereas many cell types are more or less constantly reading their DNA and producing proteins, there are huge swaths of genetic material in the spermatogonia which are left untouched for long periods of time. This is important for the proper development of the male germ cells. Amongst the many factors which control this silence are the Musashi RNA binding proteins.  Throughout Jessie’s PhD, she examined the regulation of these binding proteins, and the exact roles they play in germ cell development.

Jessie is looking forward to returning to this area of research as part of her recent successful NHMRC Early Career Fellowship application.

“I’m so happy that this project got up – it’s sort of a pet project that I’ve been dipping in and out of since Honours.
“We hadn’t really been able to fully explore it to the extent I’d like to – but last year I was fortunate enough to get a small project grant from the HMRI Bob and Terry Kennedy Children’s Research Program. We were able to generate some pilot data from that and I think that was what really pushed me over the line for the NHMRC funding.

“It’s so fantastic that now I have the opportunity and freedom to explore all the ideas I’ve had for so long.”

During the HMRI funded project, Jessie and her team honed in on the specifics of the JAK/STAT molecular pathway during ovarian development. The newly funded NHMRC project will allow them to study global changes which occur at this time.

Premature ovarian failure can be actually be triggered very early during the development of female reproductive organs.

“We’re looking for key factors that we could potentially manipulate in order to prolong fertility in these individuals.”

Outside of the lab and the lecture theaters of UON, Jessie is also an enthusiastic science communicator, and enjoys engaging with the public and talking about her research. In particular, she is keen to educate women about their fertility, as messages perpetuated by popular culture can often be misleading.

“The biggest factor (in female fertility) is age. The limiting factor is the number of eggs you have in your ovaries – and that is indiscriminate of how healthy you are.

“Health can of course detrimentally affect fertility but even if you have a healthy lifestyle, it doesn’t necessarily mean that you will have prolonged fertility.”