Proving cancer to be as unique as its sufferers, Dr Craig Gedye’s fastidious, thoughtful and well-executed scientific research is pursuing a tailored approach to patient care, rather than a ‘one-size-fits-none’ mentality. 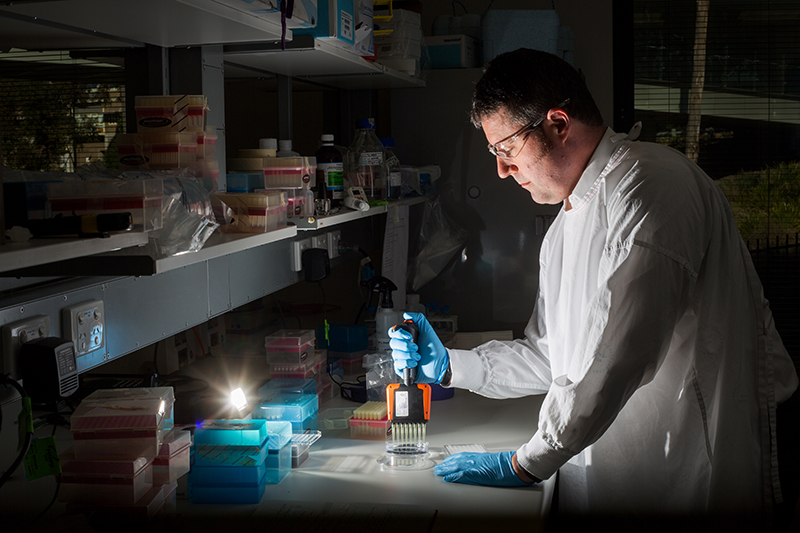 Cancer, according to Dr Craig Gedye, is like a jungle - dense, confusing, and, at times, terrifying. No two cancers are exactly alike, and this represents the greatest unmet challenge for patients, their doctors and scientists.

“The challenges drive the themes of my research; the complexity and heterogeneity of cancers,” Craig shares.

“One of the most frustrating things in the world is watching a treatment help one patient and then watching it fail completely in another.”

“It’s far from ideal but unfortunately it’s a reality – cancer is different in every person.”

Craig believes that identifying individuals who won’t benefit from particular therapies is just as important as identifying those who will. With no point offering a treatment that will fail, the solution is to find novel opportunities for specific patients.

“I treat people suffering from melanomas, as well as testicular, kidney, prostate, bladder and brain cancers,” he reveals.

“They’re tricky cancers and very hard to treat, but I think they’re the ones that have the greatest gains to be made.”

Because of the focus of his work, Craig is also an “impromptu spokesperson” for “biobanking”.

“When you have a cancer operation, surgeons cut out the tumour and pathologists put it under the microscope to determine its type, aggressiveness and what ought to be done next,” he explains.

“Once this procedure is finished, anything left over is usually discarded.”

“But this is a terrible waste; any of these peoples’ cancers might teach us about that kind of cancer and the best treatment.”

Adopting the simple saying ‘waste not, want not,’ the multitasking scientist is helping to establish systems for its set up and funding in the Hunter region.

“We want to save samples from every patient’s cancer for research, because I believe they’re extremely valuable,” he affirms.

Craig’s research career began in 1990, when he undertook a summer studentship between the University of Canterbury and University of Otago in his native New Zealand.

“After doing medicine,” he comments, “I went back to science and started a PhD in the last semester of my oncology training in 2004.”

Comically labelled as “the best of times and the worst of times,” Craig’s candidature sought to tease out notions of complexity and heterogeneity in melanoma. Under the assumption that different cancer cells are more pivotal than others, his findings were “provocative” but “not conclusive.”

“Normally you have to wait your whole professional life to be proven wrong, but I was humbled just six weeks after submitting my thesis,” he laughs.

“It’s a critical lesson – you must listen to the data.”

“I was forced to let go of an idea I’d been nurturing for three and a half years.”

Craig relocated to Canada in 2008, undertaking a Postdoctoral Fellowship at the University of Toronto and Princess Margaret Cancer Centre. Aiming to expand upon his original thesis, he went looking for complexity in kidney cancer – this time forewarned and forearmed.

“We thought cancers might be like beehives,” he says. “If you kill off the worker bees, it doesn’t matter because the queen bee will just make more, so in order to kill a person’s cancer, you need to go straight to the source and eliminate her.”

“Sadly though, this concept, called the cancer stem cell hypothesis, proved to be too nice and neat.”

Testing this hypothesis at each step, Craig spent the first half of his overseas stint exploring “problematic experimental biases” in the idea of cancer stem cells.

“If you look at the idea of a queen bee cancer cell through the lens of all these overlooked biases and problems, the whole idea unravels.” This work has recently been published in Scientific Reports.

While at the Princess Margaret Cancer Centre he simultaneously undertook a Clinical Fellowship in melanoma.

“I was on the ground as the new class of cancer drugs, the checkpoint immunotherapy antibodies, came into the clinic,” he recalls.

“It was mind-blowing to see them work so dramatically in some patients.”

Craig moved to Australia in February 2014, signing on to pursue a number of related research interests at the Calvary Mater Newcastle, University of Newcastle and Hunter Medical Research Institute. His main mission is to cement a technical, nuanced understanding of kidney cancer.

“It’s a different disease than most might otherwise imagine,” the School of Biomedical Sciences and Pharmacy affiliate acknowledges.

“To go back a bit, in the first few days of foetal development, the embryo will fold itself into three layers of cells – the endoderm, mesoderm and ectoderm.”

“The first layer becomes the surfaces of our body, such as skin and the lining of the gut, the second forms our internal structure like muscle and bone, and the third is our nerves and wiring.”

“Cancers often revert back to the behaviours of these very primitive cells, so while cancers are found in different parts of the body, they will have originated from one of the three layers, and cancer behaviour is loosely related to these layers too.”

“For example, breast, lung, bowel and ovary cancers all grow from the surface layer (the endoderm); and although they have clear differences, these cancers look a bit like each other and respond to similar chemotherapy treatments.”

Once considered a cancer of the surface layer (the endoderm), Craig’s analyses are suggesting kidney cancer is “better thought of” as a cancer from the middle layer and therefore mesenchymal cancer, or a sarcoma. He is similarly arguing that patients with the commonest form of kidney cancer, could benefit from different courses of treatment.

“Clear cell kidney cancers contain ‘skinny’ mesenchymal cells that hunt for new blood supplies, and ‘fat’ cells that are full of lipids that batten down the hatches to survive,” he elaborates.

“I’m wanting to find out what drives each kidney cancer cell to perform each way.”

“If we can somehow exploit the control of this process, we can look to offer up new ideas for treatment.”

In the not-so-distant future, Craig is planning to take a closer look at the 3,500 drugs that are currently licenced for use in humans.

“Where kidney cancer is concerned, we’ll see if any come up as useful treatments that control if we get more fat cells and less skinny cells,” he affirms.

“It might then be possible to write a clinical trial to “repurpose” medications.”

“We are expanding the clinical trials we offer patients at Medical Oncology Research at the Calvary Mater Newcastle, including trials for kidney and brain cancers.”

“It’s hard to start our own clinical trials but in my work with the ANZUP Cancer Trials Group, we are able to work with doctors across the country to devise new treatment ideas.”

“Cancer is tough. But it’s a privilege to be able to pit ourselves against cancer in the lab and in the clinic”.