Tucked away deep in the hardest part of the skull hides the vestibular system, the mysterious unsung hero of the senses. Professor Alan Brichta is its number one fan. 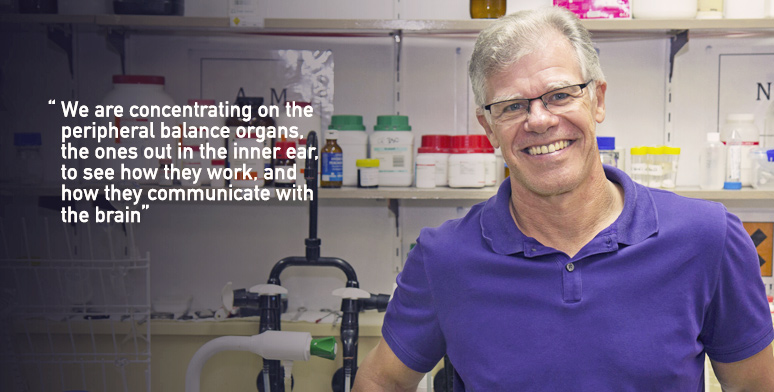 "We need the vestibular system for balance, it is specifically there to tell us, amongst other things, which way is up and which way is down," Alan asserts.

"What is fascinating to me is that most of the time we just don't think about it. We don't realise this thing is working in our favour until it goes wrong."

The relatively recent recognition of the existence of the sense of balance, as well as the inaccessible position of the inner ear vestibular organs within the skull, means there is a lack of evidence-based research on this system in action.

To counter this, Alan and his team have developed a semi-intact model of the vestibular system, which allows for live cells to remain functional.

"We are concentrating on the peripheral balance organs, the ones out in the inner ear, to see how they work, and how they communicate with the brain," he clarifies.

"People talk about exploring outer space, really we are flipping that idea on its head and are trying to discover inner space."

When not investigating the inner ear, Alan is Head of Discipline (Anatomy), supervisor of multiple research students, and teaching into a number of programs including the Bachelor of Medicine and the Bachelor of Biomedical Science.

If you were a mysterious and misunderstood body part, Alan would be your first choice for advocate.

His extensive knowledge and unbridled fascination are equally apparent as he talks up the balance system. He embodies a fervent team supporter as he derides the other senses for not being nearly as important.

"The vestibular system is how you remember which direction you came from, and is responsible for you knowing where you are as you move through your environment," Alan explains.

"You can thank it for your awareness of whether you are lying down or standing up, and for knowing which way to swim to reach the surface of the water."

"Importantly, it keeps your eyes steady when your body is moving, so your vision is more steadycam than jumpy jumble. It is so finely tuned," he discloses, "that drinking alcohol can cause it to make you wobbly, and echo wobbly the next day as it works to compensate for your previous night's wobbliness."

Unlike the other senses, the vestibular organs don't report back to one specific part of the brain, instead sending and receiving communications with many sections of the brain. Which Alan believes is proof of the critical importance of balance information to normal brain function.

"I think it's the way it works so exquisitely well for the most part that really fascinates me," Alan muses.

"What is also fascinating to me, is that most of the time we just don't think about it."

"The balance system works so well and with such little fanfare, that when something goes wrong our world is thrown into complete disarray."

Alan explains that malfunction within the vestibular system can have devastating affects on quality of life.

"The balance system itself will never kill you directly, but the resulting falls, especially in the aged, can lead to fatal consequences," Alan asserts.

"Breaking a leg, or worse still a pelvis, that's going to lead to all sorts of problems."

It's not just fear of injury that affects those with dizziness. Alan cites understandable anxiety over the possibility of creating a scene or damaging property whilst falling, as two scenarios which may make sufferers stay at home.

Due to the similarities between the effects of excessive alcohol and balance problems, accusations of drunkenness can cause further embarrassment.

"It's remarkable how quickly people do lose confidence," Alan reveals.

"And as a result, it's a hidden problem because we rarely, if ever, see people with balance problems, they are not generally out in the community."

"Whenever we have a public forum on balance and dizziness, however, it's amazing how many people attend because they are desperate to find a cure for themselves or their loved ones."

Milder effects of vestibular interruption are relatively common and can be countered.

"The brain is capable of a lot of plasticity, or modulation," Alan states.

"If the brain recognises that the signals aren't coming in quite as well as they used to, it might amplify or boost the incoming signal."

"But it can only do so much to compensate. People who have tried everything, from physiotherapy to medications to operations with little or no effect can have a very poor quality of life."

Despite the debilitating nature of balance problems, a lack of knowledge in this area means that optimum treatments are yet to be identified.

"The sad thing is we have no real treatment. We can give you sedatives; we can give you things that reduce your activity and maybe your anxiety," Alan says.

"But really there is nothing at all we can do to stop that dizziness. Because we don't know how it works, we don't know what happens when it goes wrong, or what drugs could be specifically aimed at treating the problem."

"And this is why we need more studies."

MONITORING THE MACHINE IN MOTION

The balance system is almost completely inaccessible, positioned within the thickest part of the skull, rendering the study of its working actions very difficult.

"Using an animal model, we were amongst the first to look at it as a semi-intact system, that's our specialty," Alan confirms.

As a result of their use of this system, Alan and his team have been able to test existing theoretical frameworks and generate evidence regarding previously unobserved functions.

"We can't always learn about functions from studying the parts, or by using modeling," Alan explains.

"We are at such a primitive stage of understanding that we need to study the system in action to advance our knowledge."

His most recent NHMRC-funded research has focused on the efferent branch of the vestibular system – the feedback pathway by which the brain can modulate inner ear sensitivity.

Ultimately, Alan is hoping that the work being completed by his team will result in a major improvement in the quality of life of people suffering from balance problems.

"By listening in on the communication between the inner ear organs and the brain, we are trying to decode the kinds of information that the brain is interested in," Alan explains.

"And if we do that, then maybe we can replace it if it is damaged, or supplement it as we age."

Although we accept that our hearing is likely to be affected by age, Alan points out that it is less commonly understood that balance, which uses similar receptors or sensory cells, can also be impacted by aging.

"So if we could develop a system whereby you had a prosthesis or an aid, that would be a boon to anyone who has balance problems, particularly the elderly."

Alan notes that technologies such as accelerometers and gyroscopes have shrunk in size and cost to the extent that they could be easily incorporated into a non-obtrusive aid.

"It could be like a hearing aid, but for the balance system," Alan suggests.

"It might be on a set of glasses, or possibly it could be a chip close to, or attached to the skull. It would then generate electric signals that would help the brain to know the position of our head in three-dimensional space."

"It's one of our major goals. But first we have to understand how it works to be able to fix it," he admits.

"At least in our case, because there is not that much known about it, and so few people working on it, we might just discover something really important tomorrow."