Professor Murray Cairns’ new approach to the onset of complex diseases could mark the beginning of targeted prevention and treatment options that drive improved patient outcomes. 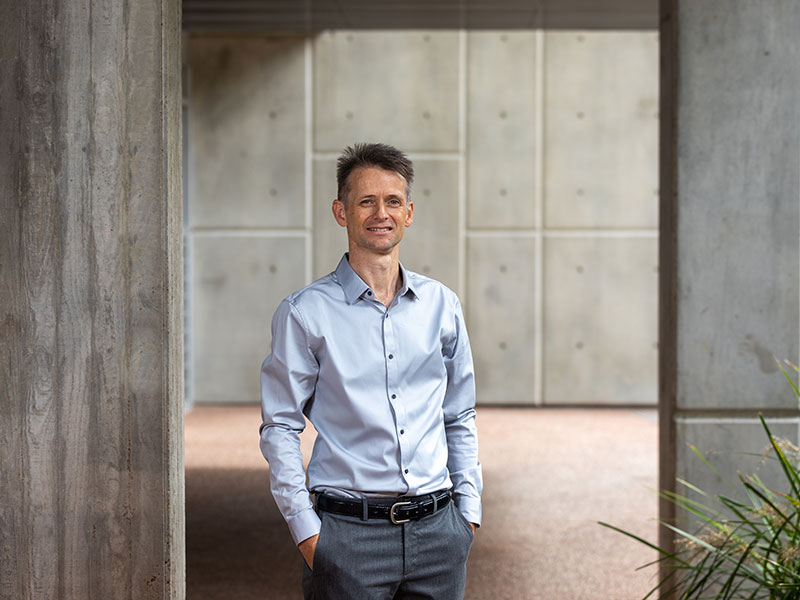 Professor Murray Cairns’ research explores the molecular architecture of complex disorders at the individual and population level to better understand their treatable components in order to provide targeted therapy.

"The advantage of knowing the molecular determinants of disease is that you can then explore pharmacological approaches that specifically interact or influence their function directly,” explains Murray.

Most common health problems, and the distress, discomfort, disability and death associated with them, don’t have a single cause. These are known as complex disorders and include heart disease, inflammatory conditions, neurological disorders, psychiatric disorders and cancer. Their onset involves multiple risk factors that can vary dramatically from individual to individual, making accurate and effective treatment difficult.

“In each case the underlying biology and response to treatment can be quite different such that current therapies for these disorders are not targeted to all the relevant causal factors. Unfortunately, this often results in unsatisfactory outcomes, including the persistence of disease or unwanted side effects.”

Murray’s research also aims to identify the modifiable components of disease risk in individuals prior to disease onset to inform preventative health strategies that can potentially reduce the need for treatment altogether.

Murray and his team are investigating complex disorders using a variety of approaches. The first involves the direct exploration of tissue pathology, where the difference between healthy and diseased donor tissue is analysed.

“While this is effective, the smaller sample sizes can be prone to statistical error and it is difficult to distinguish between causation and correlation.”

The second approach involves exploring the genetic components of complex disorders to identify genes associated with disease. What makes it such a highly effective strategy is that a substantial proportion of risk associated with contracting a particular disorder can be inherited.

“In recent years, there has been spectacular progress through global collaborations using a genetic epidemiological approach known as genome-wide association studies (GWAS). These have yielded enormous amounts of high-quality data that can be used to enhance our understanding of the molecular mechanism that can now be used to improve treatment.”

Murray spent a portion of his early career exploring the neuropathology of complex neurological conditions such as Alzheimer’s disease and Parkinson’s disease.

To broaden his experience in molecular biology and genetics, he embarked on a PhD with Vincent Murray at the University of NSW researching the mechanism and specificity of DNA-reactive anti-tumour drugs—powerful compounds that modify DNA across a large proportion of the genome but are infamous for their unpleasant side effects.

“I started to develop an interest in other nucleic acid targeting treatment approaches that had higher specificity that could potentially be both gene specific and adaptable for a given condition.”

His first postdoctoral position with Lun-Quan Sun at Johnson and Johnson Research gave him an opportunity to further explore targeted treatments in relation to cancer and viral infections.

“While working on a platform for gene-targeting therapies, I started to look into the genome to identify opportunities for drug interventions for common complex disorders. It struck me that there were often no clear targets known for these disorders and most existing treatments are directed to symptoms instead of the underlying cause. In many cases these treatments were discovered by empirical studies or trial and error testing rather than rational drug design.”

It was a realisation that steered his research toward the difficult job of identifying and integrating the complex array of genomic variation that is now recognised as a feature of most human health disorders.

Since taking up his role in Newcastle, supported by the Schizophrenia Research Institute and the National Health and Medical Research Council, Murray has focussed his research on schizophrenia and other psychiatric disorders. What he learns from these conditions can broadly be applied to most human disorders.

Complex disorders present a unique challenge in the sheer number of risk factors that generate a tremendous array of interactions and very high levels of heterogeneity.

“In other words, there are so many ways to develop these disorders, it can be difficult to appreciate the unifying mechanisms and identify the high-impact targets for drug development. A lot of work is going into the systems biology approach now to understand the redundant features that may form the basis of more successful treatment strategies.”

It’s research supported by powerful “omic" technologies that enable unprecedented levels of analysis to identify and characterise the myriad of molecular components that constitute these disorders.

In a significant step toward challenging the one-size-fits-all approach to treatment, Murray is also working to breakthrough heterogeneity in order to characterise the etiological components of complex diseases as they present in individuals. His success would mean the beginning of precision medicine where treatment, or specifically prevention, can be tailored.

Making a difference together

Murray has been involved in several fruitful partnerships with his employers, mentors and students to name a few.

“Perhaps the greatest achievements have come through partnerships with other research laboratories and the broader international consortia groups that are driving the discovery of genetic variation associated with psychiatric and neurological disorders.”

Of the many things Murray enjoys about his research, the people he works with rank high, as do the projects that have potential to shift the knowledge frontier and challenge current paradigms.

“I feel very proud of the publications that stand as a legacy of hard work, skills, intellect and instinct of the contributors. I feel particularly proud of my research students and enjoy a great sense of achievement through their success as students and ongoing success as researchers and academics.”

He’s particularly excited about his group’s current research and methodologies, which he believes have the potential to be transformative in a clinical setting.

“I look forward to having the opportunity to develop [them] further across a broad spectrum of applications and hope that this will lead to lasting tangible improvement in health outcomes."