The University's strength in engineering owes much to the work ethic and reputation of its trailblazers such as Emeritus Professor Alan Roberts. 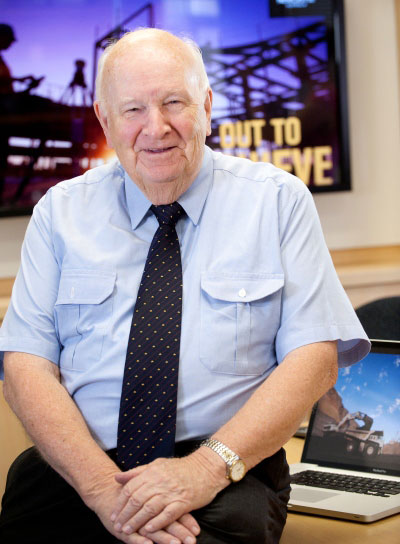 One need look no further than the University of Newcastle's Centre for Advanced Particle Processing and Transport for proof of the adage 'success breeds success'.

The Centre is renowned for world-leading research into the processing, storage and transport of minerals and industrial products and boasts an outstanding record of commercial and academic achievement. Its research has led to technological advances that have produced multi-million dollar savings for industry, and it is at the forefront of developing new-generation processes that reduce water and energy use.

Much of that success is due to the foundation laid by two of the University's elder statesmen and principal researchers in engineering, Laureate Professor Graeme Jameson and Emeritus Professor Alan Roberts.

Both have been recognised with Order of Australia awards and have received the prestigious Peter Nicol Russell Memorial Medal from the Institution of Engineers Australia for outstanding service to their profession. Both have also been elected to learned scientific and engineering academies.

Roberts was responsible for the University developing what has become an important and lucrative niche in bulk materials handling, a little-explored area of research back in the 1970s.

He established TUNRA Bulk Solids Handling as a research group and commercial consultancy in 1975. Since then it has completed more than 4000 projects for clients in 40 countries and made an invaluable contribution to research in the field.

"It has become one of the flagships of the University and has certainly validated the decision to go down that path," says Roberts, who is officially retired but still works from his office at the University's Newcastle Institute for Energy Resources (NIER) most days.

"Our work has spanned everything from fine pharmaceutical powders, to plastic powders, agricultural grains, domestic waste and minerals such as iron ore, bauxite and coal. Bulk solids handling is a complex aspect of the industrial process that applies to anything that is transported in powdered or granular form."

Jameson was already a respected expert in fluid mechanics when he came to prominence in the 1980s with his invention of the Jameson Cell. A froth flotation device for recovering fine mineral particles from mine waste and low-yield sources, it was smaller, faster and more precise than existing technology and was quickly taken up by industry.

These days there are more than 300 Jameson Cells in operation in 21 countries around the world. As well as recovering billions of dollars worth of fine coal and minerals a year, they are being put to new industrial applications including extracting oil from tar sands in Canada and removing blue-green algae from waterways in central Australia.

"It was one of those 'Eureka!' moments when all the work you have done beforehand comes together in one realisation," Jameson says of the moment he conceived the Cell.

"I was with some students at a mine in Mount Isa and I looked at the equipment they were using and thought, 'I could build something better than that'."

In their early years at the University, both Jameson and Roberts were committed to lifting the research profile of the engineering group, along with another long-time departmental leader Professor Terry Wall.

Their establishment of research centres in multiphase processing, bulk solids handling and black coal utilisation was important both in facilitating the expansion of research and enhancing the status of the University as a leader in those fields.

The University has long been a magnet for talented engineering students, researchers and academics and this is due in no small part to the reputations of Jameson and Roberts.