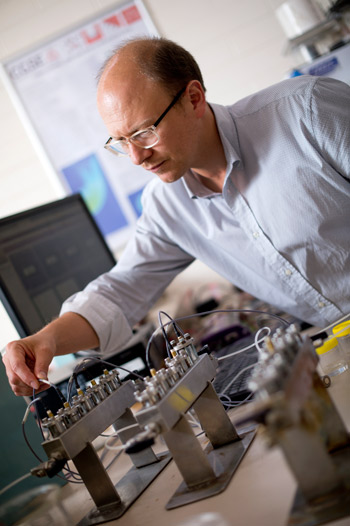 Olivier was a Chief Investigator with the ARC Centre of Excellence for Geotechnical Science Engineering (CGSE), and has received several large research grants to investigate areas including strategies to extinguish underground coal fires and to extract geothermal energy; microstructure-based computational homogenisation of geomaterials; and barriers for cost-effective rock fall hazard mitigation.

Olivier graduated from the Ecole Normale Superieure de Cachan, one of the most prestigious and competitive public institutions of higher education and research in France. After ranking second nationally at the French National Agrégation of Civil Engineering in 2000, he successfully completed a Master on rock joints (in 2001) and PhD on the hydromechanical behaviour of contacts between geomaterials in the context of nuclear waste storage (completed in 2004).

Moving to Australia from his home in France in 2005 to take up the position of a post-doctoral researcher was the first step in Dr Olivier Buzzi's career at the University of Newcastle. He began lecturing at the University in 2007, became a senior lecturer in 2009, an Associate Professor in 2012, and has since cemented his position with the CGSE.

Olivier often complements his experimental research by numerical investigations in order to deepen the understanding of the phenomena under study. Recently, he has focused his attention on the development of sensors and sophisticated experimental methods, which allow investigations on fundamental aspects of soil behaviour. One recent publication presents a new coating used to track how much irregular lumps of soils shrink as they dry. This product has the potential to solve many headaches for practitioners, as soil shrinkage behaviour often needs to be determined for soil characterization.

Another of Olivier's co-authored 2014 papers describes the results of a study into the performance of high-strength rock fall meshes, particularly focusing on the effect of the size of the block, often referred to as the "bullet effect".  The results indicated that as blocks decrease in size, so does the energy required to perforate the mesh.

Olivier is an Editorial Board member Computers and Geotechnics and Rock Mechanics and Rock Engineering, two highly recognised journals of his field.