"Bulk handling is not rocket science - it's harder." It is a big claim, but the Director of TUNRA Bulk Solids and the Head of the School of Engineering at the University of Newcastle, Professor Mark Jones, deals in big business and big products. 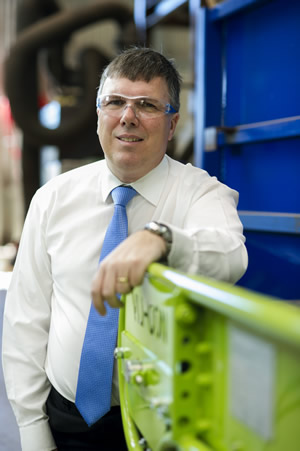 "The handling of materials can be a very, very significant proportion of costs and the University of Newcastle and TUNRA has saved millions of dollars for many national and international companies through rigorous contract research leading to significant improvements to production," Professor Jones said.

"Bulk materials handling deals with a number of varying factors that make it an extremely specialised field. The research undertaken is multidisciplinary in nature and spans a wide range of engineering and scientific topics," he said.

"It's an incredibly diverse field requiring expert knowledge in many aspects of mechanical engineering from fluid mechanics to vibrations. The interaction of a bulk material with the environment, in particular effects of moisture content, temperature and loading conditions, have a profound effect on the way a material behaves. These interactions have a massive effect on the performance of bulk handling systems and equipment.

"In fact one of our PhD students, who actually did his masters in rocket science, said he found bulk handling harder due to the complexities and wide expertise required."

Within the next six months, TUNRA is on schedule to develop a multi-million prototype for a new belt conveyor that is expected to cut energy consumption by half and potentially convey over double the distance of the current largest conveyor in the world in a single stage, resulting in huge cost savings.

Located at the University's Newcastle Institute of Energy and Resources (NIER), TUNRA's independent testing facilities has set the world standard for belt conveying with companies around the world sending their products for validation and improvement.

TUNRA is also currently researching safe transportable moisture limits for bulk cargo on ships, the outputs of which could potentially help set the world standard and guidelines through the International Maritime Organisation. Another project that Jones has in the pipeline, is a software tool and algorithm combination that predicts the lifetime of pipelines.

"TUNRA is a very unique animal and I don't know of another entity like it in the world. On one level, it's a commercial company that provides contract research and development and professional consulting. On another level, it is not-for-profit so all proceeds go straight back into research, hiring post doctorates, supporting students and building infrastructure.

"Within the one research group, our work ranges from fundamental and applied research through to industry practice and professional development programs."

Under Professor Jones' guidance, TUNRA's turnover has risen from less than a million dollars in 2005 to $4.7 million in 2012. Crucially, Jones credits much of TUNRA's success to the fact that the researchers are so closely linked with industry.

"TUNRA works very closely with industry so we actually see what the real problems are and the research we undertake is all directed to solving or minimising the problems that industry face."

With over 30 years' experience in the field and as President of the International Freight Pipeline Society, Professor Jones' is in-demand as a speaker and is set to present to conferences and courses in South Africa, UK, United States of America, India and China in the coming six months.