Civil Engineer Dr Igor Chaves has a precise focus for his research goals. He wants to build ideas. 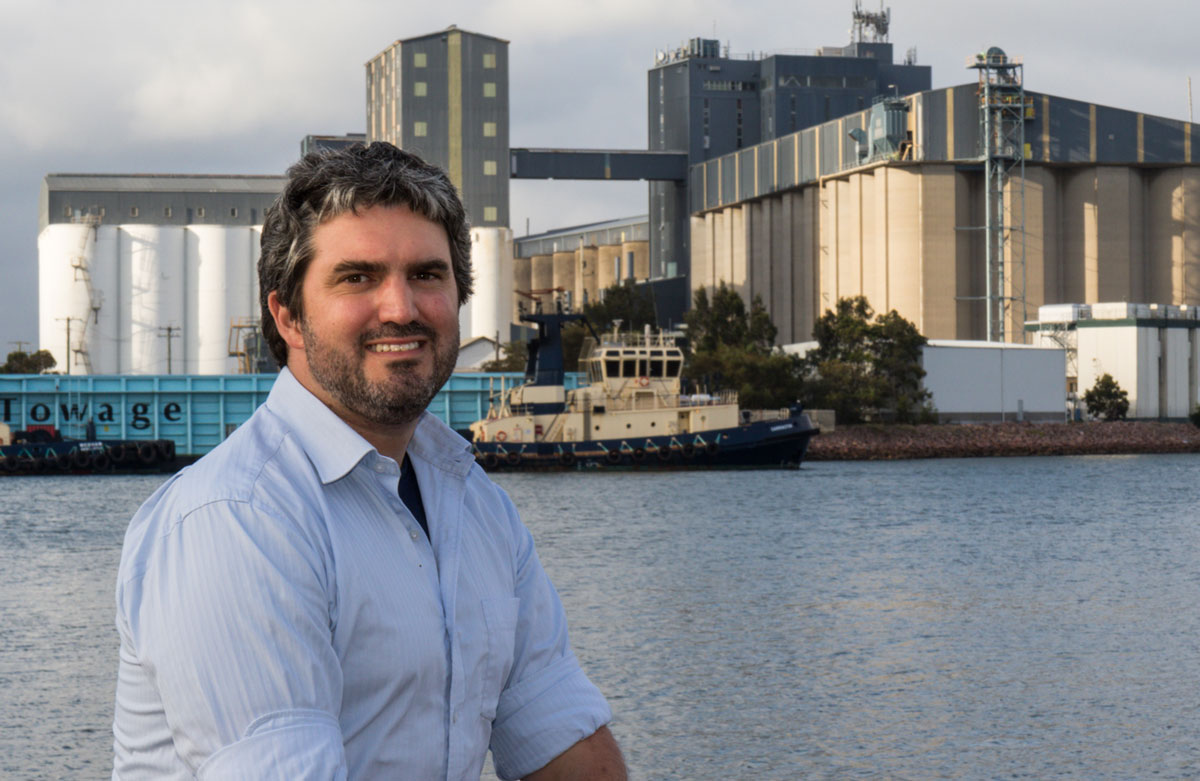 As a youth, Igor was engrossed in programs on the Discovery Channel focussed on building large structures which sparked his desire to make his mark on the world and to be a part of something that built things for the community. When it came time for tertiary study, Igor’s exemplary school results left the doors pretty wide open to study anything he desired. “I went to the Federal University of Vicosa (Brazil) to check out what was on offer for an undergraduate degree. I looked at Maths, Physics, Law, Economics and nothing was quite right. So I went over to Architecture because I wanted to design, I wanted to create things, and by chance, a lecturer saw me and said “Before you make the decision, let me put you in touch with a consulting Civil Engineer as he’ll be happy for you to hang around the office and see what they do.”

This chance meeting led to Igor working as a volunteer Construction Engineer for two and a half years while he studied Bachelor of Engineering (Civil). “I went to Uni in the morning, and worked in the afternoon.” For most people, that would be a full schedule: but not Igor. “I was also an indoor rock climbing instructor in the evenings and used to play classical guitar at weddings and theatres over the weekends to help give me a little bit of pocket money,” he grins.

“Studying a Bachelor of Civil Engineering, and being exposed to the construction management as well as the rock climbing made me realise that I don’t actually have to build ‘things’ – I can build ideas and these ideas can be applied by lots of people.”

Before graduating, Igor was head-hunted to work as an industrial researcher for two and a half years whilst being offered the top scholarship in the country to complete a Master of Structural Engineering in Brazil. Then Australia came calling, well, Newcastle in particular. “In 2009 I got a phone call from a guy called Rob Melchers from Australia. He said he’d heard good things about me and had an offer for me. I took up his offer and here I am,” Igor says.

A PhD at the University of Newcastle under Professor Melchers has led to a career as a research academic at UON. Although Igor’s career seems like a series of fortuitous events he’s quick to add that it’s all part of his plan: “It’s all mapped out,” he says with a smile. “Ever since I got into University and I had that click: ‘I’m going to build ideas’ I just drew a career path and followed it. I was very fortunate, because I had mentors that I wished to learn from that I’ve met along the way.”

A life-long learner, Igor’s career path has led him to explore rust and corrosion in his current research, and it seems a natural progression. “When I was doing Construction Management I observed that the most complex thing to handle was not the design, but the implementation and operation of that design. Making sure that during that process you guarantee longevity so that when you operate what you built you don’t have deterioration.”

“When I moved into building ideas, the same philosophy applied. We had to come up with formulas for people to use so that when they use it, the risk of that formula giving you a bad result was minimised”.

“I did my masters of Structural Engineering on minimising risk where I undertook prototypes testing with new products and computer analysis. I got a handful of results which took two years to obtain, but then those results were going to be the basis of the standardised design equations that went into the Brazilian construction codes (specifically the Brazilian Standard for Structural Steel Design – NBR 08800 2009). This made me think, ‘how can we generalise this scenario from a handful of results? Can I quantify the risks somehow?’”

“So I started teaching myself about structural reliability analysis which is the same methodology applied by Prof. Melchers’ group here in Newcastle. In fact Rob Melchers wrote the book that I was studying at the time!”

“When Rob called me he said, ‘What do you know about corrosion?’ and I said ‘Squat, I have no clue, I’m a Civil Engineer’ so he said that was good as he wanted someone with practical experience. The science is already established, we don’t reinvent the science. As a civil engineer I don’t care about what caused the corrosion – we’re concerned about what happens to structures over time. We need to quantify the risks of the structure becoming unsafe and killing people.”

Igor and his team rely on published information from experts, and where that’s not available, they collaborate with world-leaders to get the information they need. “There are a number of colleagues across the globe we’re working with,” he says.

“We’re working alongside scientists and relying on published material – or collaborating with chemists and computer scientists, microbiologists if we don’t have the data or expertise. The key thing is understanding the phenomological side of each of those variables, where it comes from, and finding the experts to collaborate with.”

During his PhD long-term corrosion of steel immersed in marine environments Igor noticed an interesting pattern with welds. “I noticed that steel on welds corrodes faster than non-welds,” Igor explains. “This can lead to catastrophies like massive oil spills, even from a very small hole in one area.”

“Assuming you have the best welder, the best material and the best practice, you will still have microstructural variations in the material itself. You don’t change the chemistry, but you can still change the shape of the crystals and how they pack up. There will be a very small area where there’s different shapes and sizes and that causes the corrosion to accelerate. We’re working on joining without welding, but even with bolting there’s a crevice which can lead to even more problematic scenarios. If you’re going to weld you need to do pre- and post-heat treatment of the welds very well to minimise that problem. Your choices are to minimise the problem or protect the area with mitigation mechanisms.”

Igor often attends International Conferences where major oil companies sent representatives to try and learn from academia in order to forge strong industrial ties. “With their infrastructure, such as North Sea Oil Platforms, it’s a major cost to them if they need to stop work to make repairs. The standard method was to identify a problem, then cut it out to repair – but this leaves the problem in that there are now two welds – susceptible to corrosion. I try to counter-argue in that it’s a short-term solution and that we can help prolong the time between repairs.”

There are three main components you should look at when trying to predict at corrosion: variables in the environment, the material itself and the corrosion mechanism. That’s where Igor’s research focus is honed.

Igor works to convince industries to invest a little in his research – to make massive gains in their bottom line. “Even if they just invest one percent of the cost of a project it can make a high impact in the long-term. Instead of trying to replicate situations in the lab, we focus going out into the real world and getting the empirical evidence for each of the variables and then bringing it into the lab.”

A 2016 Early Career and Innovation Excellence award from the Faculty of Engineering and Built Environment is the latest in a string of awards and accolades this early career researcher is gathering. “I just believe that working hard will attract just rewards,” he shrugs and smiles.

Having been nurtured under a series of mentors, the next leg of Igor’s journey is to inspire Research Higher Degree candidates with three PhD scholarship opportunities at UON. “We’re now even working with the defence industry to find the solutions to their problems. It’s an exciting time to be researching at the University of Newcastle.”