A gold mine of innovation

Laureate Professor Graeme Jameson's contribution to the Australian economy and the environment as the inventor of what is considered by many to be the nation's biggest export earner in the last 25 years, has earned him gold status within the minerals industry and the inaugural Prime Minister's Prize for Innovation in 2015. 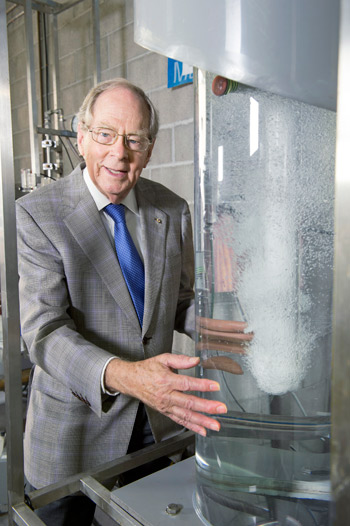 Dealing in 'bubbles', Prof Jameson revolutionised a mineral separation process first invented in 1905, to develop the Jameson Cell, a froth flotation device, that has netted Australia more than $36 billion in exports.

Prof Jameson' research continues to push the boundaries and he is currently working on a Fluidised Bed Flotation Cell that has the potential to make massive reductions in the energy used in Australia's minerals industry.

For many years, Prof Jameson's attention had been focused on improving the effectiveness of extracting valuable minerals from rock.

"I had been looking at ways to improve the flotation process for many years. I knew flotation was important to the Australian industry and felt the answer lay in the mechanics of fluids and particles," Prof Jameson said.

The Jameson Cell is a radically different flotation device that changed the way that minerals were recovered and earned Jameson almost legendary status in mining and engineering circles.

With over 300 cells now in operation across 25 countries, the Cell is being used for copper, coal, zinc, nickel, lead, silver and platinum extraction world-wide.

The process involves grinding mineral ores into small particles, suspending them in water and placing them into stirred tanks known as cells. A large mine can treat 10,000 tonnes an hour – that's similar to 10,000 small cars being reduced to dust every hour.

The Cell works by blowing air bubbles up through the liquid and using reagents to make mineral particles stick to them. The bubbles form a mineral-rich froth on the surface, which is then scraped off.

As well as recovering billions of dollars' worth of fine coal and minerals a year, the Cell has also been used for industrial and environmental applications including extracting oil from tar sands in Canada, cleaning up industrial wastewaters in Newcastle and other locations in Australia, and removing blue-green algae from waterways in inland Australia.

The finely-ground particles that were once too small to recover and previously were dumped into rivers, or buried, can now be processed. Old mines now have a longer life, and the environmental damage caused by the need open more new mines is reduced.

Jameson's reputation for commitment to an issue was formed early in his career and cemented during his early years at the University of New South Wales.

There he worked as a chemical engineering cadet in Sydney while studying part-time over an eight year period, saving to pay his living expenses to do a PhD at Cambridge University. He arrived at the University of Newcastle as Professor of Chemical Engineering in 1978.

"I see science and technology as agents for improving people's lives. I'm strongly of the view that curiosity-driven research is of great benefit to society, particularly when it is linked, however tenuously, with the solution of a real practical problem," Prof Jameson said.

"As an engineer, my interest is in striving to fix problems that are important to a particular industry, and have previously proven difficult to solve. I like to identify a problem, do the fundamental research into why the current technologies aren't working, and then come up with a practical solution based on the research," he said.

Jameson is held in high esteem by colleagues and researchers in the field of flotation. The Editor of Minerals Engineering, Dr Barry Wills, describes Prof Jameson as a "top class scientist and pioneer in flotation science and practice".

Prof Jameson's services to engineering, science, industry and the environment were recognised when he was awarded an Order of Australia Medal, AO, in 2005. He also was awarded the world's most prestigious award in mineral processing, the Antoine M. Gaudin Medal, in 2013.

In the true mark of a scientist, 30 years on from his initial breakthrough discovery, Prof Jameson is still fine-tuning and improving the Jameson Cell.

"I believe that if you're going to put your heart into something, you may as well tackle a problem that will make a difference and benefit the community.

At this point in his life, he is not ready to hang up the lab coat. He is now aiming to bring his latest invention, the Fluidised Bed Flotation Cell, to commercial reality. The device will increase the upper particle size limit of flotation and drastically reduce the mining industry's energy and water consumption.
Jameson said he wants to create a "quiet environment' for flotation which, interestingly, seems to be in keeping with his softly-spoken character.

It has been estimated by the CSIRO that the energy used in grinding rock to retrieve valuable material is equal to 14 per cent of Australia's electricity production.

"To recover particles of copper ore, for example, it is necessary to grind the whole of the feed to the plant, to a top size that is typically 150µm - about the size of a human hair," he said.

"Currently, because the coarse particles are knocked off the bubbles by the violent, turbulent action in the tank, there is a need to grind the particles to a super-fine state.

Jameson likens his new technology to the landscape that Newcastle is famous for - the beach.

"Imagine a bed of sand. If you're well away from the water the sand will be pretty stable and if you stand on it, you don't sink. However, if you go a bit closer to the water you can make the sand fluidise just by moving your feet up and down," he said.

"The sand stays more or less in the same place but the water in the sand is pumped up and down and momentarily it lifts particles away from their neighbours, so the sand becomes liquid-like and you can sink down into it.

"The fluidised bed flotation device uses the same principles by pushing air bubbles through the sediment and this creates a quiet environment for the larger particles to attach to the bubbles."

Prof Jameson recently completed a study that showed that the costs associated with a mine were roughly 43 per cent mining, 43 per cent milling and concentration and 14 per cent general administration. So a significant reduction in the milling costs will have a flow-on effect for the whole mining enterprise.

The Fluidised Bed Flotation Cell is estimated to potentially cut total operating costs of a mining venture, including the mine and the concentrator, by 10 to 20 per cent.

Prof Jameson's next milestone will be to develop an operational pilot plant that can be taken to a mine site for testing.

With a number of prospects still emerging from his latest research, Prof Jameson continues to be a gold mine of innovation for Australian industry.